The Workers’ and Peasants’ Red Army celebrating victory over the White armies in the Crimea; ca. 1920

The Helsinki white guard after the “Battle of Helsinki” in 1918.

This was during the Finnish civil war between the conservative “whites” and the socialist “reds.” The picture was probably taken after the whites, with the support of German troops, won the battle for Helsinki. (This picture might be from the parade that was held in celebration of the victory.) 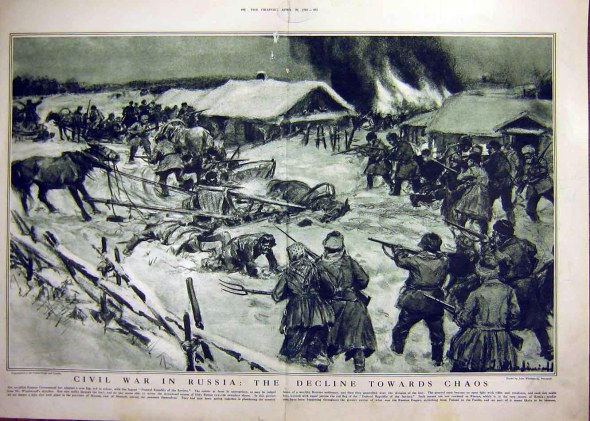 American involvement in Russia was part of an Allied Intervention into Russia rather than an actual invasion. President Wilson authorized limited military force in Russia but no formal declaration of war was ever authorized by the American Congress. Wilson ordered 5,000 men to occupy Arkhangelsk and around 8,000 to Vladivostok, a port city on the far eastern reaches of Russia. The American “expeditionary” forces were not part of a concerted American war effort but rather an American commitment made out of the emerging European debates that followed the First World War. Wilson was also known to use limited occupational forces to achieve political goals. One example is his 1914 occupation of the Mexican port city Veracruz to influence the success of a U.S. friendly Mexican government, obviously Veracruz is a different story but it demonstrates that Wilson used Executive power to authorize military occupations that were not necessarily outright invasions or declarations of war.

Importantly the number of around 13,000 thousand American soldiers was considerably less than the commitments of Czechoslovakia’s (50,000), France’s (12,000) and Britain’s (40,000). Moreover the strategic importance of the areas occupied by America were also minor in comparison to other zones of conflict and the role of America was manifestly less significant than the contributions of her Allies. General Graves who commanded the American contingent present in Siberia (American Expeditionary Force Siberia) had the aim of protecting American military equipment and American capital investment that was still in Russia after the abdication of Tsar Nicholas II. Graves’ other objectives included safe guarding the exit of the Czech legion from Russian territory and to assist the reorganization of the new Russian government.

You have to take into account that Russia in 1918 was vastly different from the Communist state that we understand it to have been throughout the twentieth century. In 1918 it was not clear that the Bolsheviks would emerge as victors, the Red Army faced opponents on four fronts to control a comparatively small area compared to the huge country we know Russia is today. The map I’ve linked at the bottom shows the extent of Bolshevik control in 1919, Archangelsk is just at the top, Vladivostok where most of the Americans were stationed is located thousands of kilometers to the east and Americans stationed there engaged in a limited role against Russian Cossacks, a group separate to the Revolutionary Bolsheviks.

Wilson’s motivations for sending American troops were numerous but stemmed from his willingness to see through his own vision for a post war peace process. He was pressured by allies to commit to Russian intervention and he likely did so in a diplomatic measure to ensure he had some leverage in the Paris Peace Conference in 1919. Undoubtedly Wilson was more concerned with fostering a democratic environment in Europe (and protecting physical American interests in Russia) rather than in participating in a huge mobilization against Russia after the toll of the First World War. The intervention was certainly no secret, Congressmen, Newspapers and Citizens were alert to the experiences of American soldiers stationed in the frozen port cities and campaigned for the men to be returned. Generally Americans opposed intervention and largely felt that their commitment in the First World War had been sufficient enough in aiding allied European nations. Additionally many Americans did not share the international spirit that Wilson pushed in the post-war peace conferences. President Warren Harding who followed Wilson’s administration condemned the intervention as a complete mistake.

Here are a couple of good sources if you want to develop some of the ideas that I’ve written here:

(It wasn’t an invasion, it was an intervention authorized by the President and not Congress and the American people knew about it.)

*Maybe the best quick read to get the bet settled that isn’t a wikipedia article.

*The introduction here will help you get a better idea on some of the context surrounding the intervention.

White Guards in Vasa at the beginning of the Finnish civil war; ca. 1918

These machine guns were water cooled, and that hose was to allow the steam generated in the water jacket to condense into water (as to not reveal the gun’s position with a plume of steam rising into the air).

During the first years of the 20th century, Russia had been working on the abolition of Finland’s autonomous status. As a result, there was strong discontent in Finnish society. In 1905 Russia lost the Russo-Japanese War. This stunning and unexpected defeat led to the Russian Revolution of 1905. In Finland the unrest was expressed in the Finnish general strike of 1905. During the strike Finnish police forces were effectively disbanded, as they had been closely associated with the occupying Russian authorities. Municipal, mostly unarmed, security guards were spontaneously organised by individuals associated with the constitutional and Social Democratic parties. At first all political groups were able to work together, but towards 1906 the civil guards of large towns had become divided along party lines. The first violent clash between Red and White Guards occurred in July 1906 in Helsinki, but after the return of Finnish autonomy the moderate Social Democrats and the whole constitutional party withdrew from military activities. However, the radicalized Red Guard of Helsinki did not disband, despite an order from the Social Democratic leadership to do so, and took part in the mutiny at Viapori fortress alongside revolutionary, anti-imperial Russian soldiers. In the ensuing fighting Czarist Russian troops destroyed the Red Guard as an organisation.

The collapse of discipline in the Czarist Russian armed forces in 1917 created a power vacuum. Here, anarchist Russian sailors are photographed in Helsinki during the summer of 1917.

The February Revolution in Russia in 1917 caused the collapse of Russian political and military power in Finland. Again, the Russian-associated Finnish police were effectively disbanded, while the largely undisciplined Russian troops engaged in violence, mostly towards their own officers. During the summer of 1917 paramilitary groups were formed for protection and to preserve order. Although the founding of these “fire brigades” was often done in a non-partisan manner, they often split into two opposing factions during the autumn of 1917. The initially unarmed Red and White Guards strove to obtain weapons. The Red Guards usually were able to get arms from revolutionary Russian military units, while the White Guards got theirs from Swedish and German supporters abroad. At the same time, political tensions between socialists and non-socialists escalated. Inside the Social Democratic party, the official leadership was derailed while the executive committee of the Red Guards and the labour unions gained more power.

The Senate, led by Pehr Evind Svinhufvud, proposed a Declaration of Independence, which the Parliament adopted on December 6, 1917. Declaring independence was one thing, but exercising control over the territory was another. Svinhufvud’s “White Senate” had nothing but the White Guards to rely on as yet. There were 42,500 Russian soldiers in Finland. Although the Imperial Russian Army was slowly disintegrating and had already started to withdraw its units from Finland, the demoralized, poorly trained and undisciplined Russian military forces in the country posed a substantial challenge to Finnish authority.

In parliament the question on forming a new security force was hotly debated. On January 13, 1918, the non-socialist majority gave authorization to the Senate (Finnish cabinet) to organize a police force of the White Guard. Soon the Senate asked General Mannerheim to form a new Finnish army on the basis on the White Guard militia. In southern Karelia the White and Red Guards clashed in small-scale engagements as both sides attempted to secure the railway to St. Petersburg. During the night of January 27–28, 1918, the White Guards started to disarm and arrest the Russian garrisons in Ostrobothnia. During the night the executive committee of the Red Guards declared the Finnish Socialist Workers’ Republic in Helsinki. The Civil War of Finland had begun.

Neither the Red nor the White Guard were trained for combat. Structures had to be built in extreme haste by both parties. The White Army had a better foundation for this, as it received the Finnish Jaeger troops, some 2,000 men trained by Germany since 1915. These soldiers were able to act as instructors and officers, forming the officer and NCO corps of the new conscript army. In addition, the White side had 1,200 volunteers from Sweden, many of whom were officers), and a significant number of Finnish officers who had previously served in the imperial Russian Army but returned home after the revolution.

Although in the beginning of the war the White Guard formed the bulk of the White army, the conscript units very soon matched the White Guard units in number. These troops, which were much better disciplined and trained than the volunteer Guards, proved to be crucial for the outcome of the war. The Red side never accomplished conscription, which was one of the reasons for its demise.

After four months of bitter fighting, the Red Guards were defeated and the White Guards were recognized as one of the key agents in the victory, downplaying for political reasons the role of the German intervention units and the German-trained 2,000 Jaegers. The Civil War was portrayed as a liberation from Russian control after a 20-year-long Russification programme, with the Whites stressing the links of the Reds to the Russian Bolshevik regime. However the White victory was achieved with assistance from the Germans. German influence after the war was so strong that the independence of Finland was greatly in question until the end of World War I.

There were reparations in the aftermath of the Civil War. As the Reds had murdered some 1,100 people in their zone of control (the so-called Red terror), the Whites retaliated ruthlessly, executing some 7,370 people after the recapture of the Red areas (the so-called White terror).Approximately 4,000 Whites and 4,500 Reds were killed in action. The famine of 1918 claimed another 20,000 lives. Of those who perished, some 13,000 died in the prison camps. Because of their ruthlessness and eagerness to retaliate, the White Guards earned the title Lahtarikaarti (Butcher Guard) among the Reds.