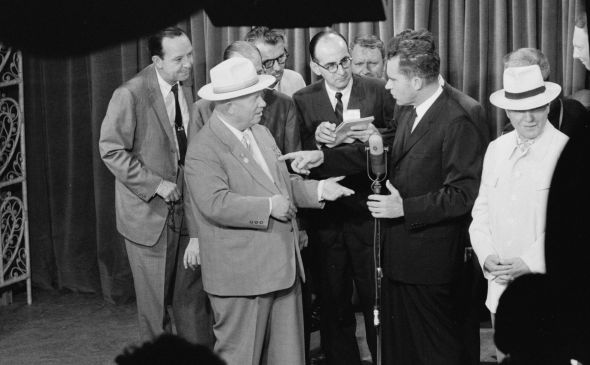 Man, this guy was just starting to see how information was being sent more quickly and at higher quality and said something so incredibly forward-thinking. That’s amazing.

Can you imagine showing this dude the fact that we can send cat-videos instantly? This would blow his mind.

White Guards in Vasa at the beginning of the Finnish civil war; ca. 1918 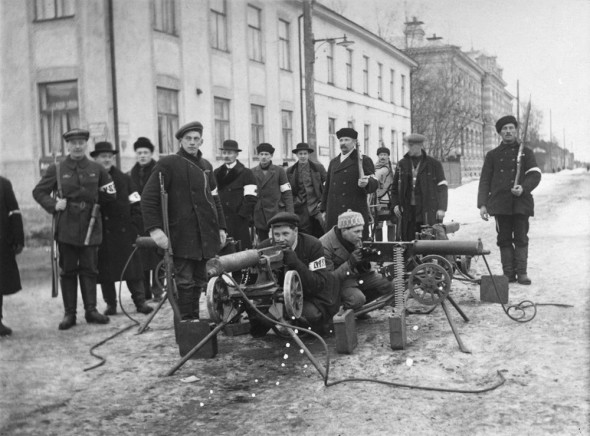 These machine guns were water cooled, and that hose was to allow the steam generated in the water jacket to condense into water (as to not reveal the gun’s position with a plume of steam rising into the air).

During the first years of the 20th century, Russia had been working on the abolition of Finland’s autonomous status. As a result, there was strong discontent in Finnish society. In 1905 Russia lost the Russo-Japanese War. This stunning and unexpected defeat led to the Russian Revolution of 1905. In Finland the unrest was expressed in the Finnish general strike of 1905. During the strike Finnish police forces were effectively disbanded, as they had been closely associated with the occupying Russian authorities. Municipal, mostly unarmed, security guards were spontaneously organised by individuals associated with the constitutional and Social Democratic parties. At first all political groups were able to work together, but towards 1906 the civil guards of large towns had become divided along party lines. The first violent clash between Red and White Guards occurred in July 1906 in Helsinki, but after the return of Finnish autonomy the moderate Social Democrats and the whole constitutional party withdrew from military activities. However, the radicalized Red Guard of Helsinki did not disband, despite an order from the Social Democratic leadership to do so, and took part in the mutiny at Viapori fortress alongside revolutionary, anti-imperial Russian soldiers. In the ensuing fighting Czarist Russian troops destroyed the Red Guard as an organisation.

The collapse of discipline in the Czarist Russian armed forces in 1917 created a power vacuum. Here, anarchist Russian sailors are photographed in Helsinki during the summer of 1917.

The February Revolution in Russia in 1917 caused the collapse of Russian political and military power in Finland. Again, the Russian-associated Finnish police were effectively disbanded, while the largely undisciplined Russian troops engaged in violence, mostly towards their own officers. During the summer of 1917 paramilitary groups were formed for protection and to preserve order. Although the founding of these “fire brigades” was often done in a non-partisan manner, they often split into two opposing factions during the autumn of 1917. The initially unarmed Red and White Guards strove to obtain weapons. The Red Guards usually were able to get arms from revolutionary Russian military units, while the White Guards got theirs from Swedish and German supporters abroad. At the same time, political tensions between socialists and non-socialists escalated. Inside the Social Democratic party, the official leadership was derailed while the executive committee of the Red Guards and the labour unions gained more power.

The Senate, led by Pehr Evind Svinhufvud, proposed a Declaration of Independence, which the Parliament adopted on December 6, 1917. Declaring independence was one thing, but exercising control over the territory was another. Svinhufvud’s “White Senate” had nothing but the White Guards to rely on as yet. There were 42,500 Russian soldiers in Finland. Although the Imperial Russian Army was slowly disintegrating and had already started to withdraw its units from Finland, the demoralized, poorly trained and undisciplined Russian military forces in the country posed a substantial challenge to Finnish authority.

In parliament the question on forming a new security force was hotly debated. On January 13, 1918, the non-socialist majority gave authorization to the Senate (Finnish cabinet) to organize a police force of the White Guard. Soon the Senate asked General Mannerheim to form a new Finnish army on the basis on the White Guard militia. In southern Karelia the White and Red Guards clashed in small-scale engagements as both sides attempted to secure the railway to St. Petersburg. During the night of January 27–28, 1918, the White Guards started to disarm and arrest the Russian garrisons in Ostrobothnia. During the night the executive committee of the Red Guards declared the Finnish Socialist Workers’ Republic in Helsinki. The Civil War of Finland had begun.

Neither the Red nor the White Guard were trained for combat. Structures had to be built in extreme haste by both parties. The White Army had a better foundation for this, as it received the Finnish Jaeger troops, some 2,000 men trained by Germany since 1915. These soldiers were able to act as instructors and officers, forming the officer and NCO corps of the new conscript army. In addition, the White side had 1,200 volunteers from Sweden, many of whom were officers), and a significant number of Finnish officers who had previously served in the imperial Russian Army but returned home after the revolution.

Although in the beginning of the war the White Guard formed the bulk of the White army, the conscript units very soon matched the White Guard units in number. These troops, which were much better disciplined and trained than the volunteer Guards, proved to be crucial for the outcome of the war. The Red side never accomplished conscription, which was one of the reasons for its demise.

After four months of bitter fighting, the Red Guards were defeated and the White Guards were recognized as one of the key agents in the victory, downplaying for political reasons the role of the German intervention units and the German-trained 2,000 Jaegers. The Civil War was portrayed as a liberation from Russian control after a 20-year-long Russification programme, with the Whites stressing the links of the Reds to the Russian Bolshevik regime. However the White victory was achieved with assistance from the Germans. German influence after the war was so strong that the independence of Finland was greatly in question until the end of World War I.

There were reparations in the aftermath of the Civil War. As the Reds had murdered some 1,100 people in their zone of control (the so-called Red terror), the Whites retaliated ruthlessly, executing some 7,370 people after the recapture of the Red areas (the so-called White terror).Approximately 4,000 Whites and 4,500 Reds were killed in action. The famine of 1918 claimed another 20,000 lives. Of those who perished, some 13,000 died in the prison camps. Because of their ruthlessness and eagerness to retaliate, the White Guards earned the title Lahtarikaarti (Butcher Guard) among the Reds.