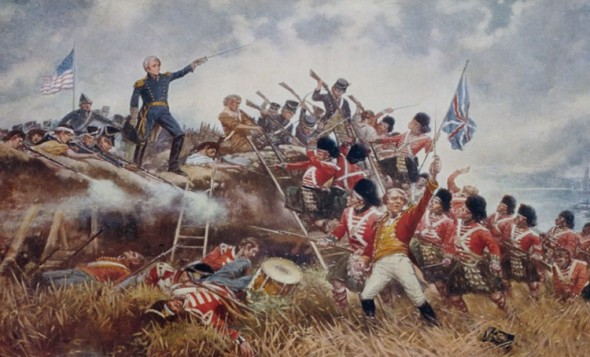 Unofficially, the war hawks wanted to see an annexation of British North America (Canada). [The subject was openly debated in the US before the war. Jefferson claimed the conquest of Quebec was “a mere matter of marching” while Clay openly said that militiamen from Kentucky on their own could capture Upper Canada. Major General Brock certainly knew the war was coming, prepared accordingly and knew the US would invade Canada. In fact, his intelligence was so good that he got news of the war before the US troops across the border, something which he used for a surprise attack.]

The US invasions of Canada failed, the British hunted down or blockaded the US navy (a few frigates managed to slip out and the USS Constitution had some spectacular victories) and blockaded the US East Coast, preventing trade and causing widespread discontent, especially in the maritime-dependent New England states, who seriously started to discuss secession from the US.

The peace treaty at Ghent 1814 did not include any gains for the US – at least not officially. The treaty included no provision that the Royal Navy was to respect US citizenship, however, the end of the Napoleonic War had led the British to stop impressment from foreign vessels anyway, so the goal was achieved, king of.

British North America remained in British hands, and eventually became Canada, independent from the US.

The British war goals were to get the US to stop fighting them, without giving anything away, as they had bigger problems back home with Napoleon running rampant all over Europe, in which they succeeded.

The US war goals, to force the British to accept US citizenship as immunity to impressment was achieved, although not officially, while Canada remained unconquered.

While the US did not lose territory, I’d say they lost the war as they were unable to achieve the goals they went to war over. The British, while not gaining anything, did achieve their war goal.

So, it is either a draw (neither side lost anything) or a British victory (as they achieved their war goals and the US did not).