Biosphere 2: It was build as airtight closed ecological system with plants, insects and animals over 13000m². Between 1991 – 1993 eight people lived in there to prove that life is possible isolated from the earth’s biosphere. The system became quickly unstable – in the end the experiment failed. 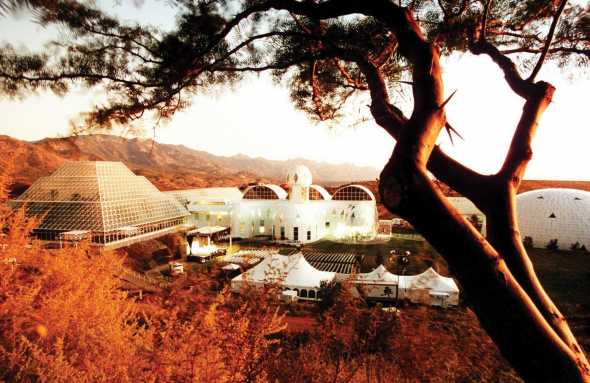 Biosphere 2 was a weird project.

It was created by a group of environmental fanatics / improvisational actors who had no concept of how to design an experiment. The biomes were chosen more on aesthetics than function, and the plants and animals were chosen on whim rather than any actual attempt to design an ecosystem where the organisms complemented each other. As baffling as the fog desert is, what kind of enclosed ecosystem needs a coral reef? They also ignored all advice from experts, such as “hey your crops need this kind of soil to grow” or “don’t use UV-treated glass or all your bees will die”. And to top it all off, these untrained people were the ones who lived inside the biosphere, rather than choosing a group of people who were psychologically stable and/or suited to the tasks required. Eventually all the scientific advisors the project did have resigned because they were sick of dealing with the bullshit.

However, despite all the trouble, there were some pretty interesting results. After the bees died out, cockroaches and then ants (both of which had breached the “seal”) took over pollination of plants. It was discovered that trees basically require wind to push them around while they grow, so that they gain structural strength, otherwise they’re unable to support their own weight later in life. The biospherians ended up having a very sparse diet, and coupled with the oxygen troubles a lot of things were learned about human health. Just imagine what else we could have discovered if people who knew what they were doing had designed this thing!

(Here’s a page about it which cites some sources.) 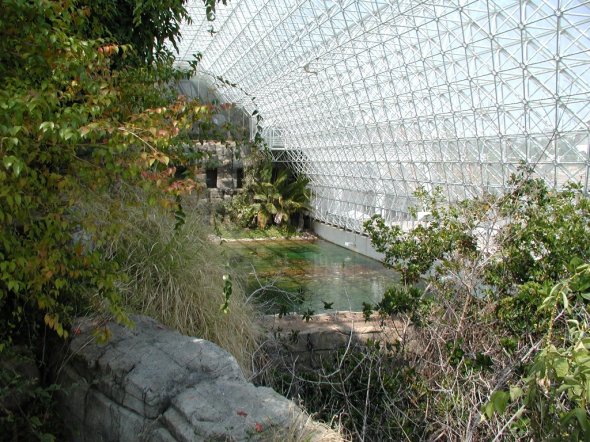 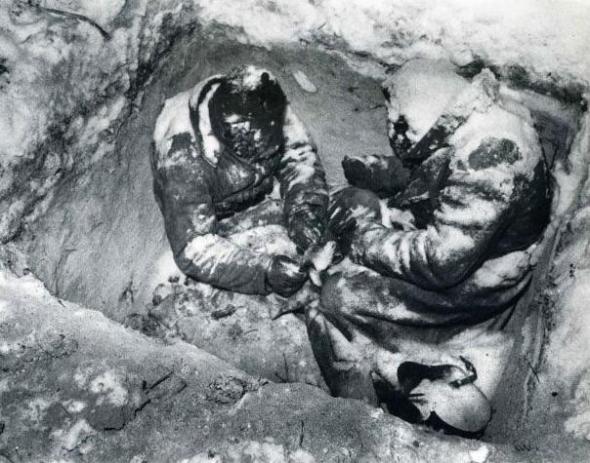 Freezing to death is one of the most peaceful and non-violent ways of natural dying. After the shivering stops and you slip into hypothermia, it’s pretty much a warm and fuzzy sensation until you slowly doze off as your vital organs slowly begin to shutdown.

The Soviets had to bring troops from far away to the Finnish front. Some of these soldiers were from the south and had never experienced winter conditions like this, combined with Finnish patrols destroying the support lines and the hardest winter of a lifetime created a grim environment. These soldiers lacked winter warfare training and gear. By simply covering the foxhole with branches and packing snow on top could have saved their lives. 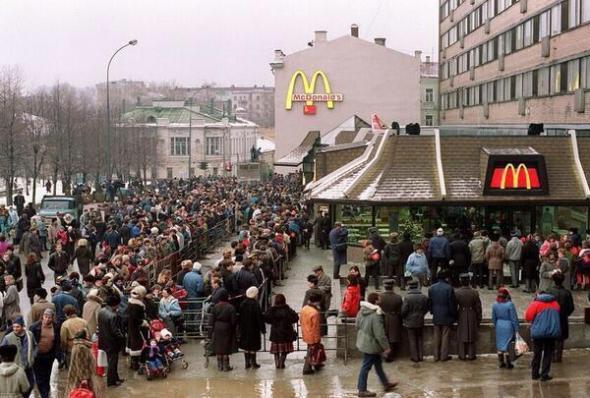 4 year old Joseph Schleifstein, who survived the Holocaust by being kept hidden by his father, from Nazi officials inside Buchenwald concentration camp, is seen here shortly after his liberation; ca. April 1945

“For a time, Schleifstein was hidden by his father with the help of two anti-fascist German prisoners, but he was eventually discovered. The SS guards took a liking to him and came to treat him as a “camp mascot”, having a small camp uniform made for him and having him take part in morning appells, where he would salute the guard and report, “All prisoners accounted for.”

Animals being used as part of medical therapy; ca. 1956.

A group of German soldiers in a trench posing with a 24cm “Ladungswerfer Erhardt” trench mortar, ca. 1916.

Display of different light bulb sizes between 1923 and 1929. 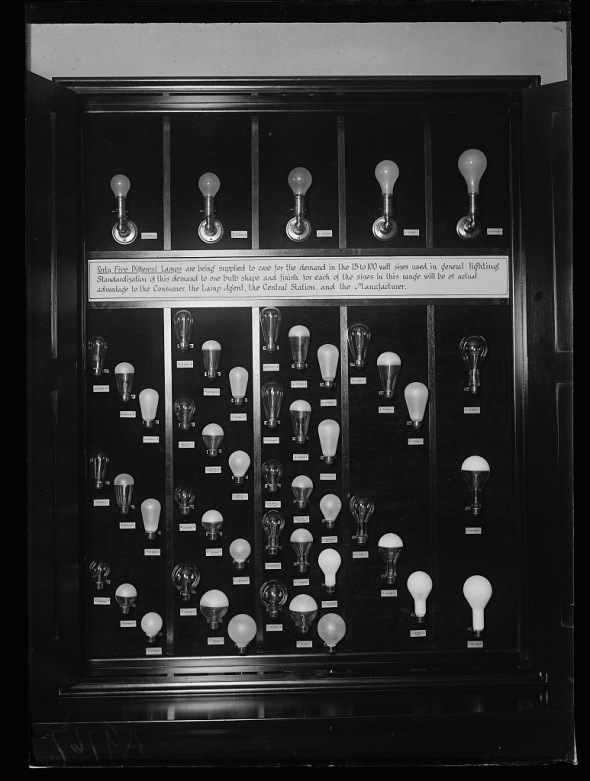 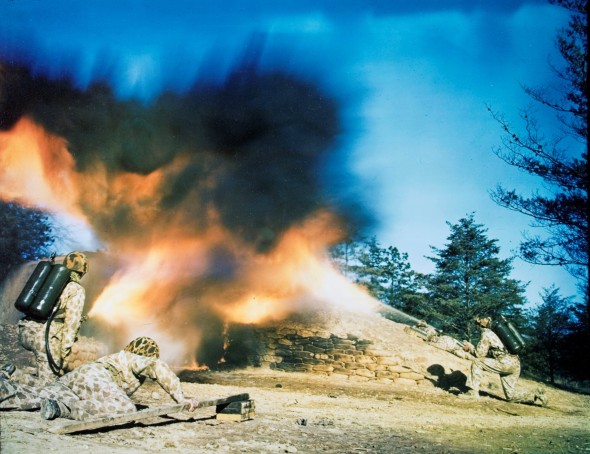 The mass infantry charges in World War One.

Massed infantry attacks in the Great War were typically carried out for one of the following reasons:

(A typical infantry assault on the Western Front from a British perspective.)

First, it had to be decided where the attack was going to take place. Not just anywhere was worth the effort. Would the ground achieved in a theoretical victory be worth holding? Would the topography of the region lead to the creation of indefensible salients? What type of troops do we have on the opposing side? Prussians? Bavarians? Saxons? Have they just rotated in, or have they been there for a while? What have they been doing themselves while they’ve been there? What’s the weather going to be like? What attacks are being planned for nearby sectors? What kind of support can we expect? These are just some of the questions that had to be asked.

Once a sector for the attack had been chosen, the preparations had to begin. Parties of men from the forward line would go out at night to ensure that there were sufficient (though not obvious) gaps at precisely-determined spots in their own line’s barbed wire installations to allow everyone to get through once the attack began. They’d also ever-so-cautiously try to creep up to the enemy wire and cut holes in it, too, for the same purpose. Ammo stores had to be checked and rechecked, equipment thoroughly inspected, all the stuff you’d expect. I won’t bore you with the cleaning protocols in the trench itself.

Now, “surprise” attacks in any sense that we might currently mean when using the term were basically impossible in the Great War, at least on the Western Front. If the enemy didn’t notice the increased bustle in your forward lines – not to mention lots of new troops being brought up to support the attack if it was going to be a large one – he sure as hell couldn’t fail to notice the artillery barrage that would typically precede the attack.

The nature and intention of such barrages varied from case to case, and there were different schools of thought as to how best to employ them even at that. They were necessary as a prelude to an infantry advance because walking into a wall of alert, functioning machine gun nests is not a way to win a war. The barrage would keep the enemy’s heads down while the troops would muster, and would throw the enemy line into a state of disruption and chaos on a practical level. Even a limited barrage of only a few minutes’ duration was useful; the machine guns employed by the Germans at the time could only effectively rotate 30 degrees, so knocking out even a couple of them could create “safe zones” towards which the infantry could proceed to punch through. They’d still have to contend with rifle and small-arms fire, but that was a reality all along the line.

Different types of barrages preceded different types of attacks. The lead-up to the Somme Offensive I mentioned above saw the German lines shelled continuously, day and night, for an entire week. Other attacks might have one lasting only a few minutes. Still others would be accompanied by what was known as a “creeping barrage,” where the shellfire was co-ordinated to fall just in advance of the attacking troops, keeping the Germans suppressed until the last possible moment. It’s worth knowing that artillery accounted for over half of all the deaths in combat throughout the war, and something like three quarters of injuries.

With the artillery roaring away, the first line would prepare to advance. The men would get up onto the firestep in the trench near their respective ladders and await the signal to go over the top. What happened next depended upon both the objectives in play and the stage of the war at which it took place.

Early on, it was more common for soldiers to move forward slowly, trying to maintain an unbroken line of advance. This owes something to the tactics of bygone centuries, certainly, but it was also a practical necessity. The war was still young enough that accomplished veterans did not exist; the entire BEF at the war’s outset was only 100,000 strong, and the need for more, more, more men, as soon as possible, everywhere, meant that the amount of rigorous, professionalizing training they could receive before being sent out was minimal. It was thought (often correctly) that expecting initiative, cunning and intuition from untested privates was a dangerous way to go about it, and the battle doctrine was adapted to the material they had at hand.

The slow line-advance kept everyone in sight of their commanding officer and aware of where they were. It allowed messages to be passed down from man to man if need be. It permitted excellent rifle-fire opportunities – in the war’s early stages, British rifle drill was still so absurdly good that it was even more dangerous than machine gun fire.

It had lots of reasons behind it. It was still awful and amazingly dangerous.

As the war went on, thankfully, everyone involved (who had lived) began to learn from their mistakes. Principles that we now take for granted were developed. With more experienced, better-trained soldiers and a better understanding of what could be accomplished by the weapons involved on both sides, infantry charges began to take on a different character. The single line was abandoned in favour of small, semi-autonomous groups – still technically in a line, I guess, but able to function well out of one as well. Advancing was done with all seemly haste, and with an eye for judicious use of terrain. Most importantly, the advance would be conducted under covering fire: one group under cover would suppress the German line while another advanced still closer. In this leap-frogging fashion, the line went forward.

“Mixed” is the best term I could apply to it, unfortunately. While there was undoubtedly a learning curve (usually thought to be most pronounced from 1916 onward), early large-scale attacks were not well-managed and did not typically succeed. The methods involved were successful when measured against the first two of the three rationales I listed so far above, but in terms of the third – breaking through – they were not.

Breakthroughs were sometimes achieved all the same (the British at Cambrai, for example, or the Germans along a long front during the Ludendorff Offensive of Spring 1918), but following up on them was difficult. The idea was to establish a thoroughfare through which cavalry and more infantry could be dispatched and take the enemy in the rear. It didn’t work out, though the idea itself is sound enough.

Many have asked if it could all have been done differently, and the answer is most certainly “yes.” What that different approach might look like is another matter…

As with most things, it varied greatly from man to man. Certainly it was terrifying for many, as the memoirs and novels of the war amply demonstrate, but others perceived it with ambivalence or even delight.

Here are some standard accounts, if you’d like to read up on it:

Finally, if you’d like a far more comprehensive and detailed view of infantry tactics of this time, you’d do well to look into Erwin Rommel’s Infantry Attacks and Paddy Griffith’s Battle Tactics of the Western Front: The British Army’s Art of Attack 1916-18. Rommel’s views on the matter were admittedly idiosyncratic, but it’s an amazing document all the same; Griffith’s volume is far more recent (1994) and offers a detached academic overview rather than a first-hand account.