The two main schools of thought are called the intentionalists and the structuralists. The intentionalist argument holds that Hitler meant to exterminate the Jews since the 1920s, and that there was a straight path from 1933 to the Holocaust. Structuralists argue that the Nazi dictatorship was weak and had to adopt anti-Semitic policies as a reaction to the activism of their mass base; they argue that there was no initial will to exterminate the Jews, but that the Holocaust was a culmination of events, that the road from 1933 to the ‘Final Solution’ was twisted, not straight.

I tend to subscribe to the structuralist interpretation for a number of reasons. Firstly, the official Nazi policy towards Jews until 1941/42 was emigration; why would a regime bent on eradicating the Jews encourage them to emigrate, mostly to neighbouring countries? According to this interpretation, events like Kristallnacht and the Boycott of 1933 were acts of brutality that were carried out to try to scare the Jews into emigrating. As well, some historians look at the fragmented decision making process of Nazi Germany which led to improvised bureaucratic decisions as an explanation for how anti-Semitic policies were concieved. Hitler would make vague suggestions regarding the Jews to his subordinates, who took these as a call for action to prove their reliability, efficiency of their organizations and their diligence. It was in this context that Goebbels organized the Kristallnacht pogrom which was given retrospective sanction by Hitler, and in which the policy of extermination was formulated. Understanding the Nazi decision making process is critical when studying a subject like the Holocaust.

The really barbaric dimension of Nazi anti-Semitism began with the German invasion of Poland and later the USSR. Previous policies were constrained by German public opinion, which was actually opposed to actions like the Boycott of 1933. When the Germans occupied Poland they also came in control of a much larger Jewish population. The Nazis had to materialize their plans for eastern colonization, and could act with more brutality against Polish Jews because they were generally disliked by the Poles and were unrestrained by German public opinion, which facilitated individual initiatives as I’ve described above. Consequently, Polish Jews were forced into ghettos to make room for German settlers. This ghettoization and a policy of forced labour for all able-bodied Jews in camps created the momentum for the Final Solution; the Nazi leadership accepted the possibility of killing thousands of Jews through starvation and exhaustion. They didn’t begin with a clear, formalized idea of exterminating the Jews, but took a step in that direction through these policies.

Further conquest placed even more strain on the Nazi leadership concerning the Jews because every country they occupied left even more Jews under their control; most of those who emigrated moved to countries in Western Europe that would later be occupied, and the occupation of Eastern Europe resulted in a huge Jewish population under German control. The invasion of the USSR in 1941 was the final radicalization concerning the Nazis’ Jewish Policy. In the first year or two of the invasion, the Nazi leadership envisioned some kind of mass deportation of Jews to Madagascar or east of the Urals once the Soviet regime collapsed. While the leadership was still thinking in terms of emigration, the gears of genocide had begun turning on a localized scale in occupied Soviet territories. The Kommissarbefehl was issued by Hitler before Operation Barbarossa and demanded that Soviet Political Commissars and other ‘bolshevized’ elements be liquidated. It was liberally interpreted by the einsatzgruppen, German death squads, to include any potentially subversive elements in the conquered population, especially Jews. In the Nazi worldview, Bolshevism and Judaism were inseparably intertwined, which motivated both their goal of eastward expansion and the impetus to eradicate the Soviet Jewry.

Because of Operation Barbarossa, the machinery used in the Holocaust were developed as well. Auschwitz was expanded to house more Soviet POWs, who were actually the first victims of the gas chamber. This coincided with Jews from Western Europe being deported to the East, where the gauleiters (regional governors) were in the process of ‘Aryanizing’ their respective territories. There were essentially given quotas on what percentage of their population had to be Germans, which made the permanent housing of Jews untenable. The machinery and local will to commit genocide had already begun, but it wasn’t until December 1941 that the Nazi leadership had committed itself to the policy of extermination. Hitler had prophecized at the sixth anniversary of his rise to power in 1939 that:

if the international Jewish financiers in and outside Europe should succeed in plunging the nations once more into a world war, then the result will not be the Bolshevizing of the earth, and thus the victory of Jewry, but the annihilation of the Jewish race in Europe!

Historians like Adam Tooze and Ian Kershaw contends that the entry of America into the war in December 1941 (even though Hitler declared war on them!) was what finally committed the leadership to genocide because of Hitler’s statement. After the Wannsee Conference in January 1942 it became official government policy, even though genocide had essentially been going under way since the invasion of the USSR. The most contentious part of the Holocaust is arguably the existence of a ‘Hitler Order’; there are some scraps of evidence that suggest that Hitler may have given a direct order to exterminate the Jews, but it is very uncertain. What is likely is that Nazi officials lower on the food chain had begun the extermination process to advance in the Party, and to show their reliability and decisiveness to the leadership. The Holocaust was not necessarily realized by rabid racists, but by ambitious Party members who used implemented the genocide in order to advance themselves, which was given sanction following the Wannsee Conference.

A British soldier gives a “two-fingered salute” to German POWs captured at the Second Battle of El Alamein, Egypt; ca. 1942

The German POW on the left has a pretty clean haircut.

The “two-fingered salute”, is commonly performed by flicking the V upwards from wrist or elbow. The V sign, when the palm is facing toward the person giving the sign, has long been an insulting gesture in England, and later in the rest of the United Kingdom; though the use of the V sign as an insulting gesture is largely restricted to the UK, Ireland, New Zealand, and Australia. It is frequently used to signify defiance (especially to authority), contempt, or derision. The gesture is not used in the United States, and archaic in Australia and New Zealand, where the finger tends to be used in such situations instead.

Here’s a report on the behavior of British POWs during the war, hopefully making it the Britishest thing you’ve read today. 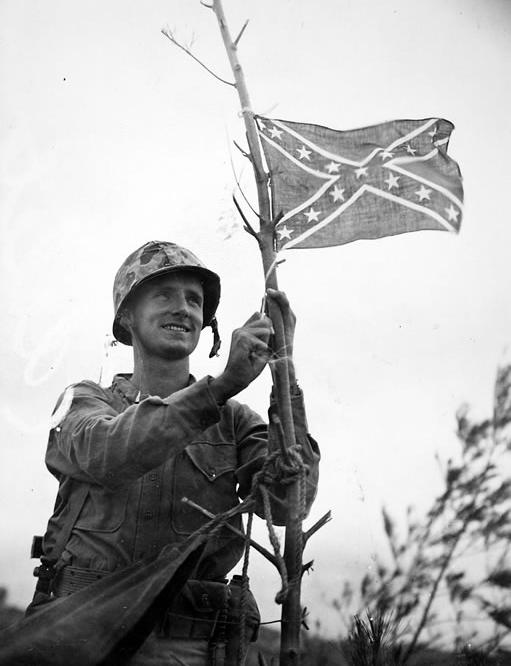