Four German soldiers in bunk beds who had been woken up for a surprise photograph during World War I; ca. 1917. 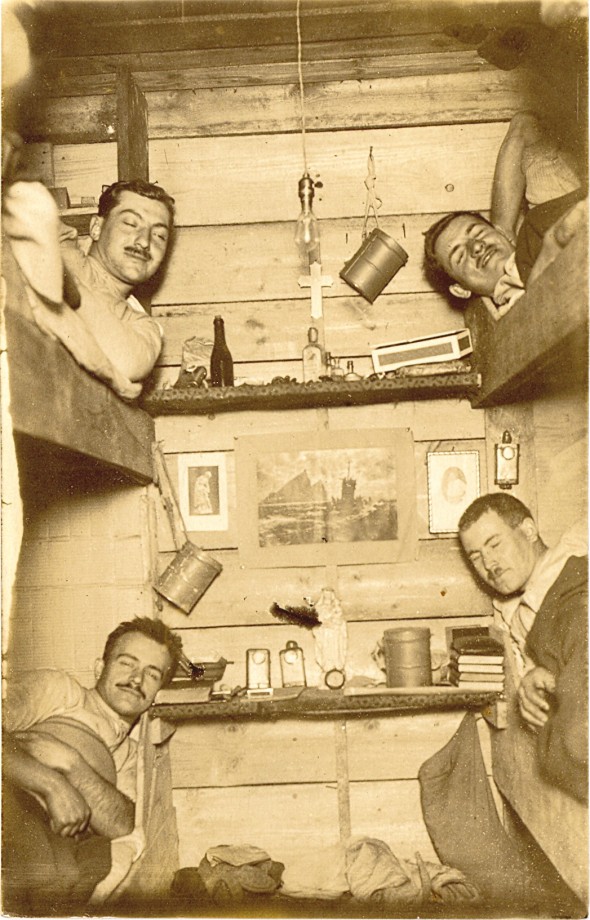 I guess if you’re a soldier in WWI, a photo is one of the best things you can hope for in a surprise wake-up.

I think it’s worth noting that the photo captured the men with their eyes closed because the method of illumination was a flash-lamp, which burned a bit of magnesium in a trough held up by the photographer. That light source burnt long enough for the men to react to it before the shutter was tripped on the camera, thus their eyes are closed.

Today if you were to take this photo with a digital camera and flash, you might capture them with eyes open, since the time between flash and shutter is much smaller and more instantaneous of an image capture. 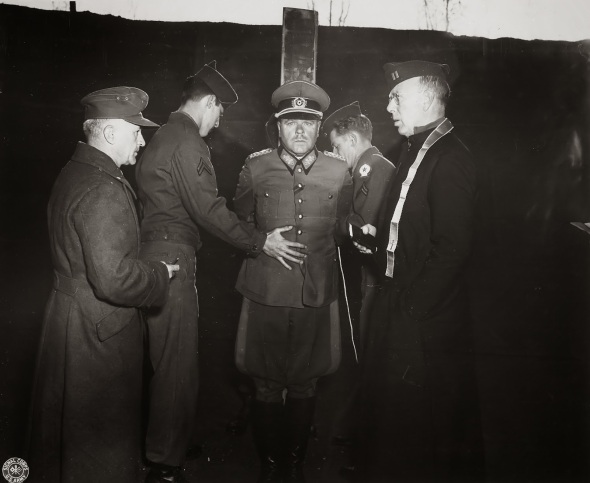 A US soldier offers his hand to a woman leaving a cave where she had hidden with her child, Saipan; ca. 1944.

She isn’t only scared by the war, but also by the Japanese propaganda. The Japanese told everyone that Americans would rape and murder them if captured. According to the PBS Nova documentary, the Japanese government told the citizens that in order to become a United States Marine, you had to murder your parents. American loudspeaker units and American marines offered food and safe passage. But many of the civilians were not interested or were too frightened to listen. Some waded into the sea, some used knives, some borrowed grenades from Japanese soldiers… Most though seem to have used a nearby suicide cliff, where whole families walked off into eternity.

*Here’s footage of the suicides from a documentary (showing a actual suicide and some of the bodies at the bottom of the cliffs):

According to Wikipeida, 22,000 or the 25,000 civilian inhabitants of Saipan committed suicide at the request of the emperor:

Emperor Hirohito personally found the threat of defection of Japanese civilians disturbing. Much of the community was of low caste, and there was a risk that live civilians would be surprised by generous U.S. treatment. Native Japanese sympathizers would hand the Americans a powerful propaganda weapon to subvert the “fighting spirit” of Japan in radio broadcasts. At the end of June, Hirohito sent out an imperial order encouraging the civilians of Saipan to commit suicide. The order authorized the commander of Saipan to promise civilians who died there an equal spiritual status in the afterlife with those of soldiers perishing in combat. General Hideki Tōjō intercepted the order on 30 June and delayed its sending, but it went out anyway the next day. By the time the Marines advanced on the north tip of the island, from 8–12 July, most of the damage had been done. 1,000 Japanese civilians committed suicide in the last days of the battle to take the offered privileged place in the afterlife, some jumping from “Suicide Cliff” and “Banzai Cliff”.