On October 1, 1995, Robert Overacker rode a jet ski over Niagara falls to raise awareness about the homeless. He was killed when his parachute failed to open. 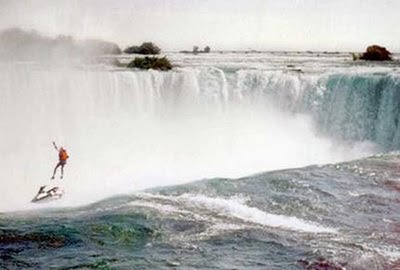 Entering the Niagara River near the Canadian Niagara Power Plant, he started skiing toward the Falls. At the brink, he attempted to discharge a rocket propelled parachute that was on his back. It failed to discharge. His brother and a friend witnessed the stunt.

At first it seemed that he had survived the plunge, but the rapids have a strange way of flailing a corpses’ arms around, often giving the appearance of a person swimming. Robert Overacker was later retrieved from the water, taken to Niagara General Hospital where he was pronounced dead.

His body was recovered by Maid of the Mist staff. Overacker, married with no children, became the fifteenth person since 1901 to intentionally go over the Falls in or on a device.” (Source)

Video of the jump.