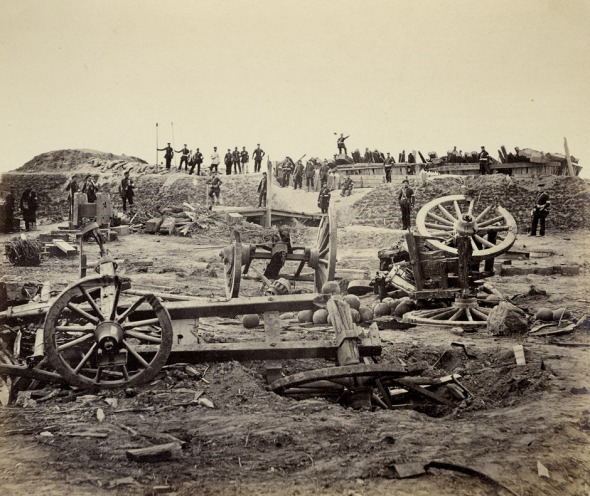 The Battle of Dybbøl was the key battle of the Second Schleswig War and occurred on the morning of 18 April 1864 following a siege starting on 7 April.

On the morning of 18 April 1864 at Dybbøl, the Prussians moved into their positions at 2.00. At 10.00 the Prussian artillery bombardment stopped and the Prussians charged through shelling from the Rolf Krake which did not prove enough to halt them. Thirteen minutes after the charge, the Prussian infantry had already seized control of the first line of defence of the redoubts.

A total massacre of the retreating troops was avoided and the Prussian advance halted by a counter-attack by the 8th Brigade, until a Prussian attack threw them back; that attack advanced about 1 km and reached Dybbøl Mill. In that counter-attack the 8th Brigade lost about half their men, dead or wounded or captured. This let the remnants of 1st and 3rd Brigades escape to the pier opposite Sønderborg. At 13.30 the last resistance collapsed at the bridgehead in front of Sønderborg. After that there was an artillery duel across the Alssund.

During the battle around 3,600 Danes and 1,200 Prussians were either killed, wounded or disappeared. A Danish official army casualty list at the time said: 671 dead; 987 wounded, of whom 473 were captured; 3,131 unwounded captured and/or deserters; total casualties 4,789. The 2nd and 22nd Regiments lost the most. Also, the crew of the Danish naval ship Rolf Krake suffered one dead, 10 wounded.

The Battle of Dybbøl was the first battle monitored by delegates of the Red Cross: Louis Appia and Charles van de Velde. Following the battle, the Prussians used the fort area as a starting point to attack Als in June 1864.

While the battle of Dybbøl was a defeat for the Danes the activities of the Rolf Krake along with other Danish naval actions during the conflict served to highlight the naval weakness of Prussia. In an attempt to remedy this the Austro-Prussians dispatched a naval squadron to the Baltic which was intercepted by the Danish Navy at the Battle of Helgoland. A peace treaty was signed on 30 October 1864 that essentially turned the duchies of Schleswig and Holstein into an “Austro-Prussian condominium, under the joint sovereignty of the two states.” The German chancellor, Otto von Bismarck, had taken one of the first steps toward launching the German Empire that would dominate Europe until World War I.

This entry was posted on April 18, 2016 by Miep. It was filed under European History, European Warfare 1789-1918, History, Human History, Images of History, Life under siege, Military History, Photography and was tagged with Battle of Dybbøl, Friedrich Brandt.