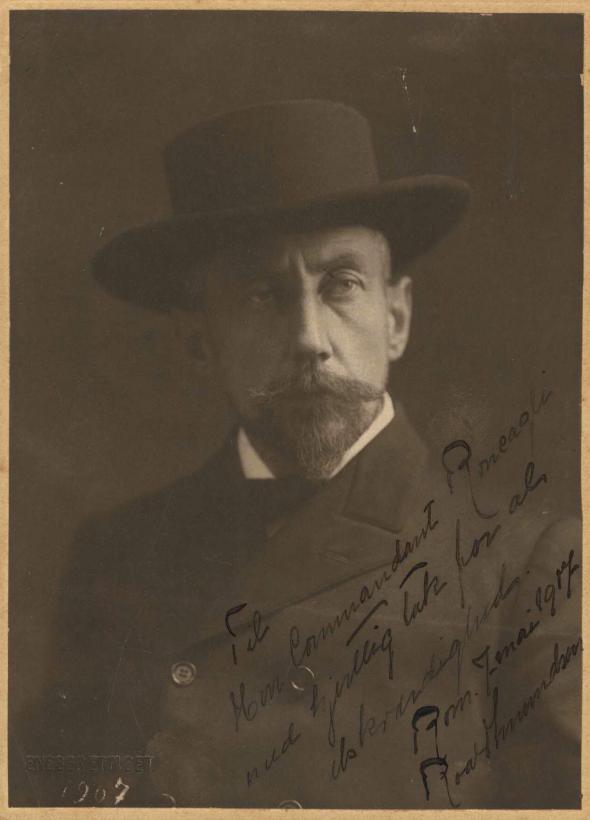 Civil War Veteran Jacob Miller was shot in the forehead on Sept.19th 1863 at Brock Field at Chickamauga. He lived with an open bullet wound for many years, with the last pieces of lead dropping out 31 years after he was first shot; ca. 1911

Braidwood is sending to the state G.A.R. encampment today one of the most remarkable hero survivors of the Civil War. His name is Jacob Miller and since Sept. 19, 1863, he has lived with an open bullet wound in his forehead. For a number of years the bullet remained in his head but piece by piece it fell out till now. It is thought none of it remains in the wound. During the time it was in the head it at times would produce a stupor, which sometimes would last two weeks, it being usually when he caught cold and produced more of a pressure on the brain. At other times delirium would seize him and he would imagine himself again on picket duty and would tramp back and forth on his beat, a stick on his shoulder for a musket, a pitiful object of the sacrifice for freedom. As these pieces of lead gradually loosened and fell out he regained his usual health and is now at the age of 78 years, one of the most, if not the most, remarkable survivor of the Civil war.

The harrowing experience undergone by Mr. Miller is so vividly felt by him even at this late day that it is seldom he can be persuaded to talk of it.

But it is my privilege to record from his own hand writing written for his family the story of his miraculous escape from death at that memorable time under his signature.

Jacob Miller, formerly a private in company K 9th Indiana Vol. Inf. Was wounded in the head near Brock Field at the battle of Chickamagua, Georgia on the morning of Sept. 19, 1863. I was left for dead when my company when my company fell back from that position. When I came to my senses some time after I found I was in the rear of the confederate line. So not to become a prisoner I made up my mind to make an effort to get around their line and back on my own side. I got up with the help of my gun as a staff, then went back some distance, then started parallel with the line of battle. I suppose I was so covered with blood that those that I met, did not notice that I was a Yank, ( at least our Major, my former captain did not recognize me when I met him after passing to our own side).

At last I got to the end of the confederate line and went to our own side while a brigade of confederates came up to their line behind me. There were none of the Union forces found on that part of the field when I passed along. I struck an old by-road and followed it the best I could, as by this time my head was swelled so bad it shut my eyes and I could see to get along only by raising the lid of my right eye and look ahead then go on till I ran afoul of something, then would look again and so on till I came to the Lafayette Pike near the Kelly house and started towards the field Hospital at the springs. I at length got so badly exhausted I had to lie down by the side of the road. At last some bearers came along and put me on their stretcher and carried me to the hospital and laid me on the ground in a tent. A hospital nurse came and put a wet bandage over my wound and around my head and gave me a canteen of water. I don’t know what time of day they examined my wound and decided to put me on the operating table till after dark some time. The surgeons examined my wound and decided it was best not to operate on me and give me more pain as they said I couldn’t live very long, so the nurse took me back into the tent. I slept some during the night . The next morning (Sunday), the doctors came around to make a list of the wounded and of their company and regiments and said to send all the wounded to Chattanooga that the ambulances would carry and told me I was wounded too bad to be moved, and if the army fell back those that were left there could afterwards be exchanged.

As stated before I made up my mind as long as I could drag one foot after another I would not allow myself to be taken prisoner. I got a nurse to fill my canteen with water so I could make an effort in getting near safety as possible. I got out of the tent without being noticed and got behind some wagons that stood near the road till I was safely away (having to open my eye with my finger to take my bearings on the road) I went away from the boom of cannon and the rattle of musketry. I worked my way along the road as best I could. At one time I got off to the side of the road and bumped my head against a low hanging limb. The shock toppled me over, I got up and took my bearings again and went on as long as I could drag a foot then lay down beside the road, to see if I could not rest so I could move. I hadn’t lain long till the ambulance train began to pass, the drivers as they passed me asked me if I was still alive, then passing on. At last one of the drivers asked if I was alive and said he would take me in, as one of his men had died back awes, and he had taken him out. Then it was all a blank to me, (Monday the 21st I came to myself and found I was in a long building in Chattanooga Tenn., lying with hundreds of other wounded on the floor almost as thick as hogs in a stock car. Some were talking , some were groaning. I raised myself to a sitting position got my canteen and wet my head. While doing it I heard a couple of soldiers who were from my company. They could not believe it was me as they said I was left for dead on the field at the left of Brock Cabin. They came over to where I was and we visited together till then came an order for all the wounded that could walk to start across the river on a pontoon bridge to a hospital, to be treated ready to be taken to Nashville. I told the boys if they could lead me, I could walk that distance. I started but owing to our army retreating the night before, and was then in and around the city wagon trains. Troops and artillery were crossing the river on the single pontoon bridge. We could not get across until almost sundown. When we arrived across and up on the bank we luckily ran across our company teamster, who we stopped with that night He got us something to eat After we ate some (the first I had tasted before daylight Saturday morning the 19th), we lay down on a pile of blankets, each fixed under the wagon and rested pretty well as the teamsters stayed awake till nearly morning to keep our wounds moist with cool water from a nearby spring.

Tuesday morning the 22nd we awoke to the crackling of the camp fire that a comrade built to get us a cup of coffee and a bite to eat of hard tack and fat meat. While eating, an orderly rode up and asked if we were wounded. If so we were to go back along the road to get our wounds dressed, so we bid the teamsters good-bye and went to get our wounds attended to. We had to wait till near noon before we were attended to. That was the first time I had my wound washed and dressed by a surgeon. After we were fixed up we drew a few crackers, some sugar coffee, salt and a cake of soap and were ordered to get into an army wagon with four army mules, ( God Bless the army mule, the soldiers friend.) We got in and started to go over Raccoon or Sand Mountain to Bridgeport, Ala. To take the train to Nashville, Tenn. After riding in the wagon awhile I found the jolting hurt my head so badly I could not stand it so had to get out. My comrades got out with me and we went on foot. I was told it was 60 miles that route to Bridgport, at least it took us four days to get there. Wednesday morning when I woke up I found I could open my right eye and see to get around. We arrived at Bridgeport the fourth day out from Chattanooga at noon, just as a train of box cars were ready to pull out. I got in a car and lay down. I had gained my point so far–and how. As the soldiers term it with lots of sand, but the sand had run out with me for the time being.

The next thing I remember I was stripped and in a bath tub of warm water in a hospital at Nashville. I do not know what date it was; in fact I didn’t pay much attention to the dates from the Friday at noon when I got in the box car at Bridgeport to start to Nashville.

After, some length of time I was transferred to Louisville , Ky. From there to New Albany, Ind.. In all the hospitals I was in I begged the surgeons to operate on my head but they all refused.

I suffered for nine months then I got a furlough home to Logansport and got Drs. Fitch and Colman to operate on my wound. They took out the musket ball. After the operation a few days, I returned to the hospital at Madison and stayed there till the expiration of my enlistment, Sept. 17, 1864. Seventeen years after I was wounded a buck shot dropped out of my wound and thirty one years after two pieces of lead came out.

Some ask how it is I can describe so minutely my getting wounded and getting off the battle field after so many years. My answer is I have an everyday reminder of it in my wound and constant pain in the head, never free of it while not asleep. The whole scene is imprinted on my brain as with a steel engraving.

I haven’t written this to complain of any one being in fault for my misfortune and suffering all these years, the government is good to me and gives me $40.00 per month pension.