The Oklahoma Land Rush of 1889 was the first land rush into the Unassigned Lands. The area that was opened to settlement included all or part of the present-day Canadian, Cleveland, Kingfisher, Logan, Oklahoma, and Payne counties of the US state of Oklahoma. The land run started at high noon on April 22, 1889, with an estimated 50,000 people lined up for their piece of the available two million acres (8,000 km²).

The Unassigned Lands were considered some of the best unoccupied public land in the United States. The Indian Appropriations Bill of 1889 was passed and signed into law with an amendment by Illinois Representative William McKendree Springer, that authorized President Benjamin Harrison to open the two million acres (8,000 km²) for settlement. The Homestead Act of 1862, signed by President Abraham Lincoln, allowed legal settlers to claim lots up to 160 acres (0.65 km2) in size. Provided a settler lived on the land and improved it, the settler could then receive the title to the land. 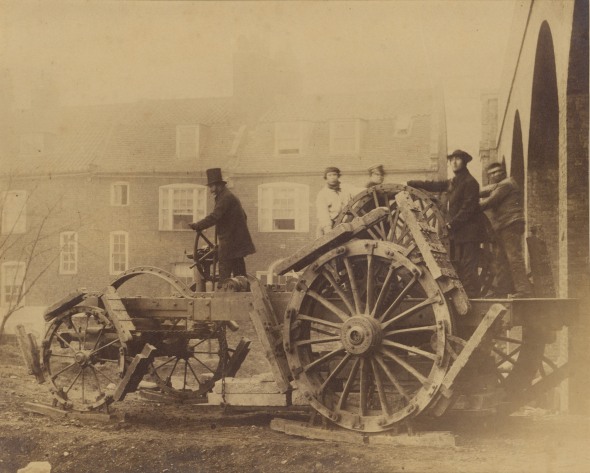 These types of wheels were later used on artillery pieces in WWI.

German infiltrators lined up for execution by firing squad after conviction by a military court for wearing U.S. uniforms during the Battle of the Bulge; ca. 1944

These men were part of Operation Greif (Griffin). From left to right are Schmidt, Billing, and Pernass.

“Perhaps the largest panic was created when a German commando team was captured near Aywaille on 17 December. Comprising Unteroffizier Manfred Pernass, Oberfähnrich Günther Billing, and Gefreiter Wilhelm Schmidt, they were captured when they failed to give the correct password. It was Schmidt who gave credence to a rumor that Skorzeny intended to capture General Dwight Eisenhower and his staff….Pernass, Billing, and Schmidt were given a military trial at Henri-Chapelle on 21 December and were sentenced to death and executed by a firing squad on 23 December.”

The soldiers in the picture were executed after a military trial pursuant to the Hague Convention of 1907. The commander of the operation, Otto Skorzeny, was actually tried after the war – along with a significant number of concentration camp officials and guards, in the Dachau tribunals. Interestingly, Skorzeny and the other surviving officers involved in Operation Greif were acquitted based on the argument that the German soldiers in American uniforms were not technically ordered to fight (just to spread deception). However, it has generally been accepted that wearing an enemy’s uniform and infiltrating his lines is a great way to get yourself shot as a spy.