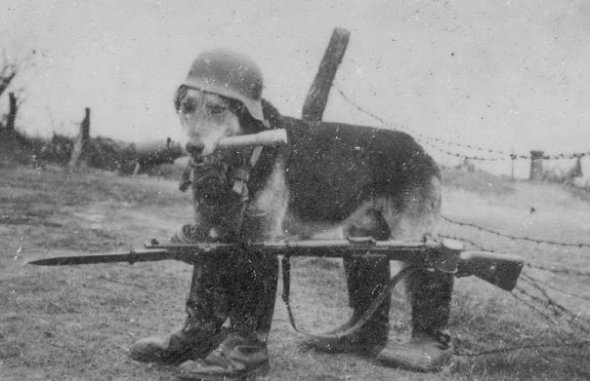 I love that who ever did this placed the grenades in the boots with the tops sticking out in order to hold the rifle, German ingenuity!!!

Marching Belgian Carabiniers leading their dog-drawn machine gun carts towards the front line during the German invasion of Belgium; ca. 1914 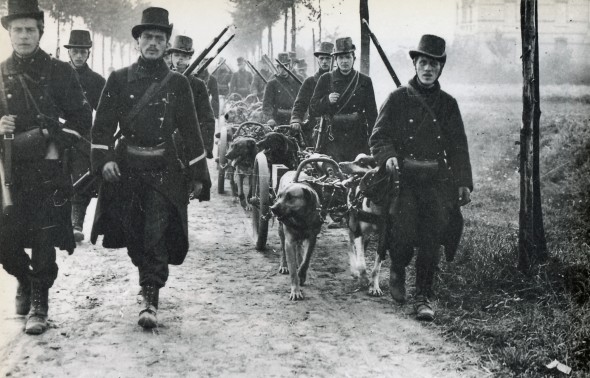 I feel sorry for all parties involved, human and quadruped…

“Marching toward the camera, and shot from a low angle, these Belgian Carabiniers are given a powerful sense of purpose by the photographer. Clean uniforms and neat formation say the soldiers have not come from battle.

These are the early days of WWI and Belgium has been invaded by the Germans in a surprise move. The Germans, 600,000 strong, were confident against the small Belgian Army of around 117,000, who were ill-equipped and poorly trained.

Yet the Belgians fought bravely in and around their fortifications in the Liège area. They held up the German advance for ten days before withdrawing on 16 August, when the Liège system finally fell. This delay would prove crucial to the French forces’ ability to re-organise and oppose the German push through Belgium into France.

King Albert I had ordered his Army to retreat to the ‘National Redoubt’ at Antwerp, consisting of over 40 forts and several lines of defence. Our Carabiniers are part of the force sent forward to cover that retreat by confronting the advancing Germans.

Marching out of the foggy background, the Carabiniers, with their Tyrolean hats and dog-drawn heavy machine-gun, look as if they are striding out of the past into the light of 20th century warfare. Almost like gentlemen in top hats taking their dogs for a walk.

The traditional dress of the Carabiniers, a light-infantry unit, was a tunic and greatcoat of a green so dark that the German nickname for them was the ‘black devils’. Many new recruits, however, were given a greatcoat of the more usual Belgian Army dark blue because of the chaotic supply situation. Despite their old-fashioned uniforms, their machine-guns were effective enough, though both soldier and dog were to pay a high price.

Although the main German forces bypassed Antwerp, four divisions had to be diverted to contain the Belgian forces there, further weakening the thrust into France. Antwerp did not fall until 9 October.” 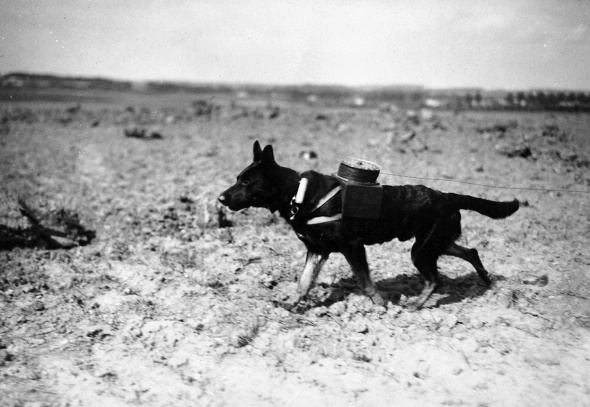 Reminds me of that movie Enemy at the Gates… but with dogs instead of people.