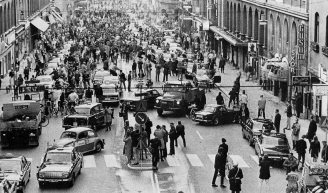 This entry was posted on May 2, 2018 by Miep. It was filed under European History, History, Human History, Images of History, Photography, Pursuit of Happiness, The Drama Of It All and was tagged with 1967, Dagen H, Driving, Högertrafik, Högertrafikomläggningen, Left- and right-hand traffic, Malmö, September 1967, Stockholm, Sweden, Swedish, Traffic.