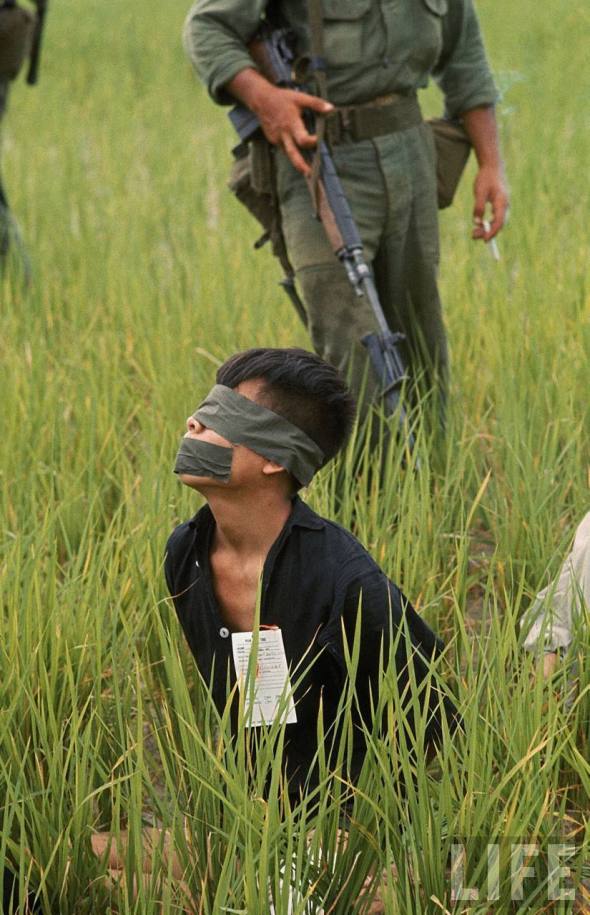 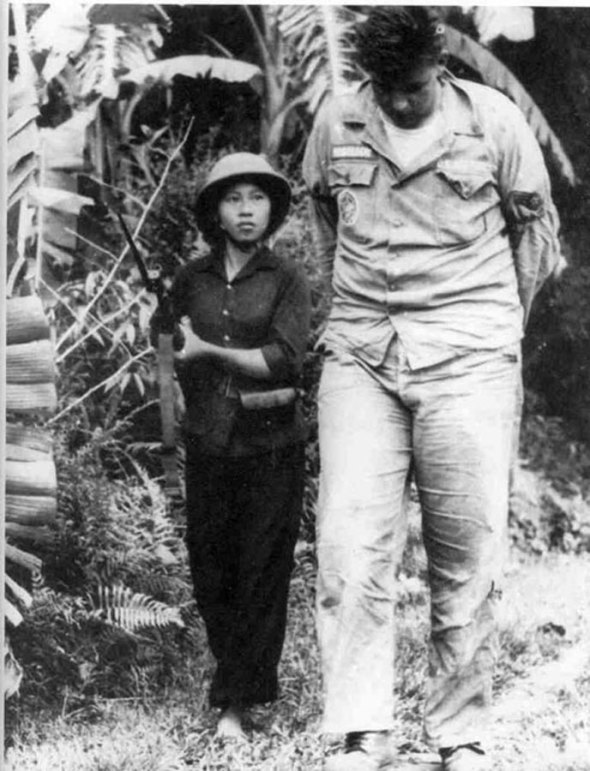 This was taken at the beginning of his captivity.

“Public records do not indicate the precise nature of the mission undertaken on September 20, 1965, but the HH43B went down near the city of Tan An, and all four personnel aboard the aircraft were captured. It is not clear if the four were captured by North Vietnamese or Pathet Lao troops or a combination of the two. Duane W. Martin was taken to a camp controlled by Pathet Lao. Curtis, Robinson and Black were released in 1973 by the North Vietnamese, and were in the Hanoi prison system as early as 1967.”

Vietnam veterans protest at the Statue of Liberty. Between ’71-’75.

War war war, its all America is known for unfortunately.

The cavalry rides. Northeast of Saigon, 1966.

Vietnam was the first war to start using choppers on a massive scale to move troops quickly for their search and destroy missions.

The tactic of moving soldiers to designated LZ’s using choppers was both bad and both good in Vietnam. The good side was that they could move soldiers many miles without them getting bogged down in the jungle and taking them days or even weeks to get to their objectives. The bad was that the choppers could only hold about 6 soldiers.

You have to keep in mind that for the most part GI’s would have to be dropped in the jungle and then move towards the hill they were sent to destroy. There aren’t many clearings leaving space for multiple chopper drops of troops. On the first few days when troops landed on ground in Vietnam 250+ troops were tasked with taking a hill. For instance, during the Battle of Ian Drang, their LZ had only enough room for 8 choppers to go down at a time and drop off troops ( so a total of 48 troops per drop and 400 troops were sent.). The scary part was that their Intel was wrong and instead of there being a few NVA it ended up having 3 full battalions with a total of 1600 NVA. With such fierce fighting, the LZ was so hot the choppers had to land reinforcements further away and fight their way to the original landing force to keep them alive and supply them with ammo. Out of 200 of the 400 men on the LZ they were outnumbered 8 to 1.  What saved them from being overrun was having an air force liason with them and him call in multiple runs of napalm to be dropped on the VC forces to keep them away.

They routinely would have artillery barrages before sending choppers. After they landed the air force would usually provide air support as they can see the situation unfolding on the ground. The reason the U.S. found the VC so difficult was because the GI’s orders would only be to find the enemy and destroy them. Once they cleared a hill the GI’s would leave and the VC would reoccupy the hill no matter how many casualties they had. Vietnam was a war where enemy body count was seen as how effectively we were progressing in the war. It was also the first war to be highly publicized with no censorship from the military and battles such as the “Tet Offensive” would be broadcasted on the news for the American public to see. Its one of the reasons why the American Public was so against it, they saw everything that happened.