Posts tagged “The Treaty Of Versailles”

Spectators standing upon couches, tables and chairs to get even a glimpse of the Versailles Treaty being signed, France, 1919 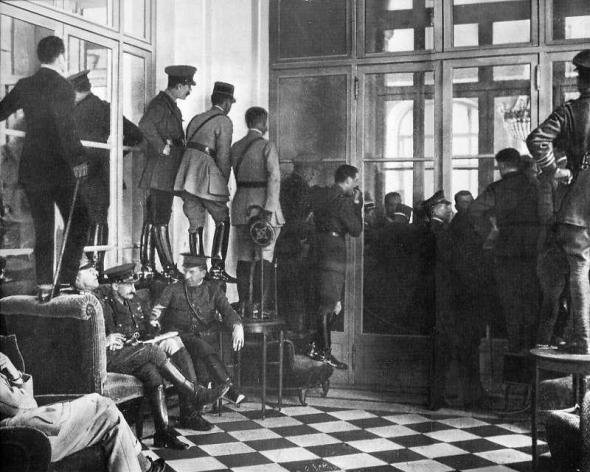 I like the guy on the far left. Keeping it classy with that cane.

“There was very little ceremony or dignity. The plenipotentiaries all walked in casually with the crowd… When they were all seated, the German delegates were brought in; they passed close to me; they looked like prisoners being brought in for sentence… The Gernabs signed first and then all the other delegates… When the signing was finished, the session was closed, and the Germans were escorted out again like prisoners who had received their sentence. Nobody got up or took any notice of them, and there was no suggestion that, the peace having been signed, any change of attitude was to be begun. Looking back, the whole impression seems to me, from a political point of view, to be disastrous… As a matter of fact, what was really being done was not merely to make peace with germany, but to sign the Covenant of the Leage of Nations, but of this no one seemed to think… Just the necessary note of reconciliation, of hope, of a change of view, was entirely wanting.”

The Treaty Of Versailles:

The Treaty Of Versailles caused the rise of Hitler (why don’t they just say plainly that WWII was actually the UK, France, and USA’s fault):

-It’s a complex issue. People like John Maynard Keynes (who published The Economic Consequences of the Peace soon after the Treaty of Versailles) did warn of the Treaty’s problems.

The thing is, any measured historical analysis of the German economy at the time shows that they could have kept up with reparations payments, had:

•The Great Depression not happened

It would be more accurate to blame Prussia/Germany for causing WWI than it would be to blame the Allies for causing WWII, and even then it would not be very accurate. The Allies may have betrayed purported (Wilsonian) ideals of a new democracy when they sat down to write up the Treaty of Versailles, but they did no worse (arguably better) than had been the norm for European war prior to that.

-Honestly, the treaty wasn’t that bad. Contemporary Germans thought it was the worst thing ever (and they were joined by some British observers, like Keynes), <—Given that WWI was over before it could really be fought in Germany, combined with the rosy (unrealistic) glow of Wilson’s 14 points/new diplomacy around the end of the war, many Germans had incredibly unrealistic expectations for how lenient the Allies would be, making the peace a huge shock to the national psyche.

I’d just like to point out that in all fairness, the Germans also lost a lot of land in the east that was predominantly German: the Allies (stupidly) decided self-determination meant less than enlarging the eastern European states.

But looking closer it can be argued that Germany’s position improved after Versailles. Unlike France and Belgium, Germany hadn’t been invaded during the war and its economy and industry were relatively intact (most french industry was in the north under German occupation), and unlike Britain the Germans didn’t have a crushing burden of external debt. The Germans lost the Danish speaking parts of Holstien, Alsace Lorraine, a tiny bit of land to Belgium, and the predominantly polish areas in the East. However, instead of having the intractable empires of Austria-Hungary and Russia to contend with, they had a number of smaller states that could be economically and politically dominated, while Britain and France were no longer close allies due to disagreements over reparations. The German military was limited, but they quickly found some ways around this (building tank factories in Soviet Russia, for example), and they had a large reparations burden imposed on them. However, these reparations in the end did not amount to very much, because the British had a vested interest in keeping reparations low (a better German economy meant a better British economy), and the hyperinflation in Wiemar Germany meant that the actual amount paid by the Germans was revised downward several times.

Versailles stripped Germany of about 10% of its territory, while the German imposed treaty of Brest Litovsk on Russia took 40% of Russia’s population, on top of other things.