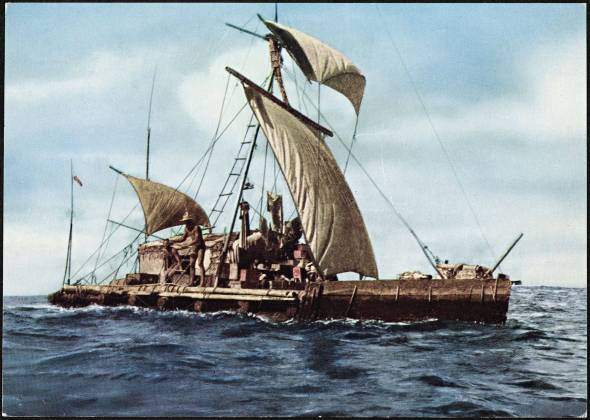 The Kon-Tiki expedition was a 1947 journey by raft across the Pacific Ocean from South America to the Polynesian islands, led by Norwegian explorer and writer Thor Heyerdahl. The raft was named Kon-Tiki after the Inca sun god, Viracocha, for whom “Kon-Tiki” was said to be an old name.

Heyerdahl believed that people from South America could have settled Polynesia in pre-Columbian times. His aim in mounting the Kon-Tiki expedition was to show, by using only the materials and technologies available to those people at the time, that there were no technical reasons to prevent them from having done so. Although the expedition carried some modern equipment, such as a radio, watches, charts, sextant, and metal knives, Heyerdahl argued they were incidental to the purpose of proving that the raft itself could make the journey.

The Kon-Tiki expedition was funded by private loans, along with donations of equipment from the United States Army. Heyerdahl and a small team went to Peru, where, with the help of dockyard facilities provided by the Peruvian authorities, they constructed the raft out of balsa logs and other native materials in an indigenous style as recorded in illustrations by Spanish conquistadores. The trip began on April 28, 1947. Heyerdahl and five companions sailed the raft for 101 days over 6900 km (4,300 miles) across the Pacific Ocean before smashing into a reef at Raroia in the Tuamotu Islands on August 7, 1947. The crew made successful landfall and all returned safely.