Terry Fox runs in his blood stained shorts, during his Marathon of Hope run across Canada in July 1980. He ran a marathon a day for 143 days until he died. 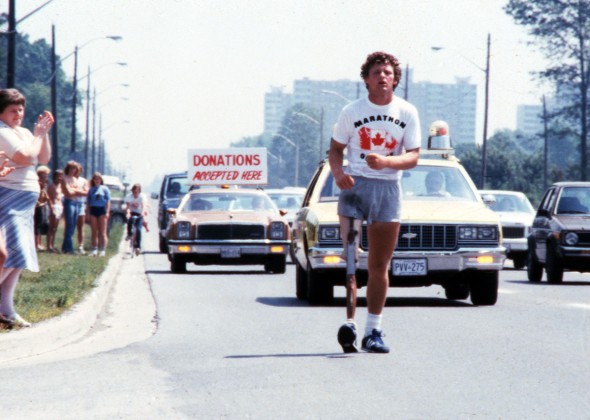 He knew he wasn’t going to survive, but that wasn’t his goal. His goal was to raise awareness and raise money, and he damn well did accomplish that.

Terry Fox (July 28, 1958 – June 28, 1981) was Canadian who in 1980, with one leg having been amputated, embarked on a cross-Canada run to raise money and awareness for cancer research. Although the spread of his cancer eventually forced him to end his quest after 143 days and 5,373 kilometres (3,339 mi), and ultimately cost him his life, his efforts resulted in a lasting, worldwide legacy. The annual Terry Fox Run, has grown to involve millions of participants in over 60 countries and is now the world’s largest one-day fundraiser for cancer research; over C$600 million has been raised in his name.