THIS IS THE ONLY TRULY DEMOCRATIC SPACE LEFT IN THIS ONCE GREAT NATION.

During the most recent (and amazingly homogeneous!) all-Caucasian Tea Party gathering there was destruction of government property and no arrests? The crowd of Tea Party members was so raucous and potentially violent that the National Park’s SWAT and riot police had to be called in.

Anywhoozles, can you imagine for a moment how much tasing and tear gas would have been used if these people were anybody else?

Why do protesters from the left get maced and arrested while these people get to act without constraint? 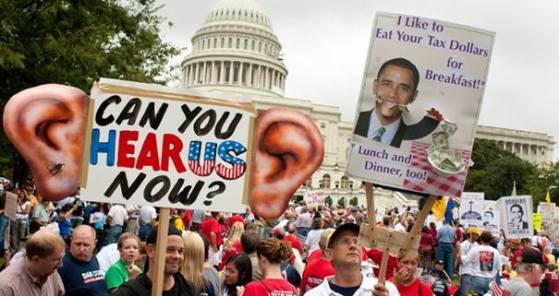 ( The Tea Party took barricades from the memorial and brought them to the White House gates in apparent protest of President Barack Obama… some were thrown at the White House fence, others were strewn all over the grassy area surrounding it. That can be considered destruction of property. They also yelled and threatened the cops that were there, who are working without pay since the shutdown started. When they picked up the barricades (opening them up to further vandalism) and walked off with them, why weren’t they arrested for stealing barricades? Those things are expensive; it would be more then a misdemeanor…

There use of “Civil Disobedience” upsets me. There’s nothing gained by moving the barricades somewhere else; that just makes (the once barricaded area) vulnerable to crimes other than the ones they are supposed to be engaging in… Are we supposed to be impressed and feel patriotic that they knocked over a few barricades to visit a war memorial? It never occurs to these people that their loved ones fought and died for a functioning government and a better way of life for all Americans; not the deprivation and degradation promoted by the political parasites they idolize. It’s pathetic. They’ve probably convinced themselves they’re honoring WWII vets by bravely fighting against (foreign enemies…wait, no that’s not right) their own government. What a profoundly sad disconnect.)