﻿In Soviet Russia, music criticizes you! 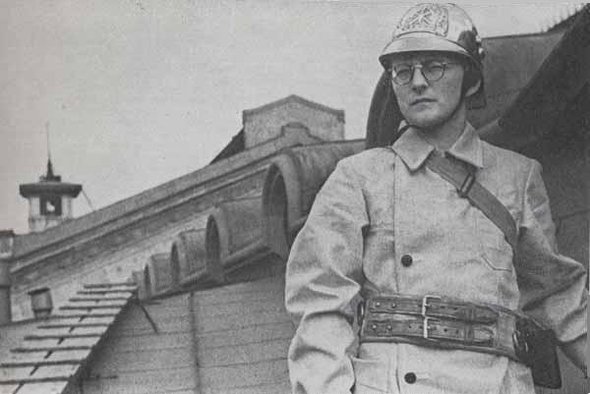 Dmitri Dmitriyevich Shostakovich (Дмитрий Дмитриевич Шостакович, 1906-1975) is probably more popularly associated with Soviet Russia than any other composer. He was a child prodigy, but his adult career flourished during Joseph Stalin’s reign of terror, and this influenced his art very directly. In 1936, Comrade Stalin attended a performance of Shostakovich’s opera Lady Macbeth of the Mtsensk District; although the opera had previously been praised by the Soviet press for its ideological correctness, Stalin quite visibly did not enjoy it. Two days later, an editorial in Pravdacalled the opera “Muddle Instead of Music” and suggested that things “may end very badly” for Shostakovich. In this first prototype of the Communist regime’s new mechanism of cultural control, critics who had previously praised Shostakovich’s work publicly revised their opinions; he lost most of his commissions and performance engagements, and several of his friends and family were soon imprisoned or executed.

Shostakovich’s response was the Fifth Symphony, which he advertised as an apology for Lady Macbeth: “an artist’s creative response to just criticism”. Thus began a series of apparently patriotic compositions to gradually restore his official favor with Stalin and the musical authorities. Most of this work is ignored today, with some exceptions like the wartime Seventh Symphony (“Leningrad”). Meanwhile, Shostakovich wrote his most personal feelings into “desk drawer” compositions, mainly piano solos and especially chamber music, not meant for public performance.

Of course the biggest event in restoring Shostakovich’s public reputation was Stalin’s death in 1953, the same day as Sergei Prokofiev’s. Shostakovich ostensibly commemorated Stalin with his Tenth Symphony, and many of his earlier works were finally premiered. In fact, he regained so much favor with the Khrushchev regime (fortunately, Khrushchev had no ear for music that he joined the Communist Party to become General Secretary of the Composer’s Union; by this point, younger composers were happily studying forbidden musical concepts like serialism, and Shostakovich suddenly seemed like an icon of conformity. It’s not clear what was going through Shostakovich’s head, even from his own conflicting accounts, but soon he wrote the Eighth String Quartet – some previous works had been dedicated to friends and family who perished under Stalin, but this one was privately dedicated to himself, a musical suicide note.

Though the quartet trailed off in a signature morendo, Shostakovich survived, turning inward to psychological pessimism and dread for his late period. Despite his conservatism, he influenced a school of younger successors, including Alfred Schnittke.

Even when Shostakovich seemed to be at his most patriotic, did he really mean it? Or did the apparently simple-minded themes sit on a layer of irony, concealing deep commentary on Soviet repression? And were these messages meant to be recognized by audiences while eluding official critics? These allegations are made in a supposed memoir, but historians question its authenticity.

At any rate, Shostakovich’s music is structurally conservative and old-fashioned for the time, official Soviet policy on “formalism” notwithstanding. Nearly all his work is quite clearly and accessibly tonal, with some extensions or tidbits of chromaticism. With fifteen string quartets and fifteen symphonies, often with roughly traditional movement orders, he was certainly one of the most prolific composers of these backward-looking genres in the twentieth century. And backward he did look: he was fond of quoting melodies from other composers or himself, and channeled Bach in his own preludes and fugues. Even his most personal chamber music generally follows the same formal and tonal idioms as his symphonies meant for public consumption.

From Mahler, he took not just orchestration but the concept of the symphony as psychodrama (Boulez: “the second, or even third pressing of Mahler”). His late string quartets show an affinity with Beethoven’s, in much the same respect. He was influenced by many Russian composers, including contemporaries like Prokofiev and Stravinsky as well as the old greats like Tchaikovsky and especially Mussorgsky. Though it’s not immediately apparent to the ear, he counted the Second Viennese School among his strongest inspirations.

But, people seem to never talk about Symphony No. 4, which is my personal favorite.

Scored for a Mahlerian orchestra and stuffed with the most jarring dissonances, it begins with a shocker and closes with a triumph that subsides into a slow death. Indeed, I believe that the ending of Symphony No. 4 is THE MOST CHILLING ending of all time. Nothing tops this… a heartbeat in the timpani + sustained floating c minor chord in the violins + undulating celeste figure that all fades away.