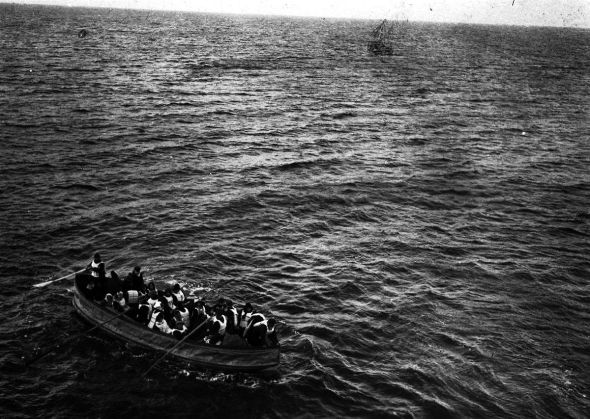 By the time Collapsible Boat D was launched at 2:05 a.m., there were still 1,500 people on board Titanic and only 47 seats in the lifeboat. Crew members formed a circle around the boat to ensure that only women and children could board. Two small boys were brought through the cordon by a man calling himself “Louis Hoffman”. His real name was Michel Navratil; he was a Slovak tailor who had kidnapped his sons from his estranged wife and was taking them to the United States. He did not board the lifeboat and died when the ship sank. The identity of the children, who became known as the “Titanic Orphans”, was a mystery for some time after the sinking and was only resolved when Navratil’s wife recognised them from photographs that had been circulated around the world. The older of the two boys, Michel Marcel Navratil, was the last living male survivor of the disaster. First Class passenger Edith Evans gave up her place in the lifeboat to Caroline Brown, who became the last passenger to enter a lifeboat from the davits. Evans became one of only four First Class women to perish in the disaster.

In the end, about 25 people were on board when it left the deck under the command of Quartermaster Arthur Bright. Two first class passengers, Hugh Woolner and Mauritz Håkan Björnström-Steffansson, jumped from A-Deck (which had started to flood) into the boat as it was being lowered, with Björnström-Stefansson landing upside down in the boat’s bow and Woolner landing half-out, before being pulled aboard by the occupants. Another first class passenger, Frederick Maxfield Hoyt, who had previously put his wife in the boat, jumped in the water immediately after, and was hauled aboard by Woolner and Björnström-Steffansson. The number of people on board later increased when about 10–12 survivors were transferred to collapsible D from another boat. Carpathia picked up those aboard collapsible D at 7:15 a.m.