Participants in the “Miss Besieged Sarajevo 1993” beauty pageant line up on stage in front of a packed audience in Sarajevo. The 13 contenders held a banner reading: “Don’t Let Them Kill Us”; May 29, 1993 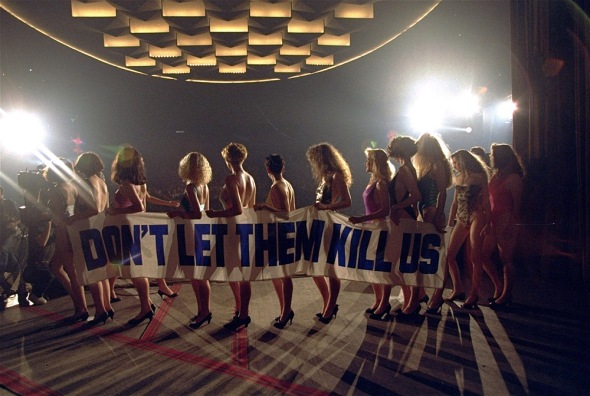 The winner and runners up.

U2 wrote a song about this and performed it with Luciano Pavarotti:

A top sniper, codenamed “Arrow,” loads her gun in a safe room in Sarajevo, June 30, 1992. The 20-year old Serb who shoots for the Bosnian forces says she has lost count of the number of people she has killed .

She ended up getting shot in the back, basically ripping out her whole stomach and she still walked out of there, not thinking about her but about her comrades and the rifle.

The Bosnian army sniper known by the code name “Arrow” was wounded in early December, hit in the back by a 7.62mm bullet fired from a tank light machine gun. The bullet drove just past her spine and ripped out through her stomach, but missed her kidneys and spleen.

“I never thought for a split-second that I was dead, but I thought my spine had gone,” she said. “I was more worried that I couldn’t walk and my two comrades would refuse to leave me there and they would be killed too.” She forced herself to stand and run another 250 yards to safety, after making sure one of her comrades had picked up her rifle. 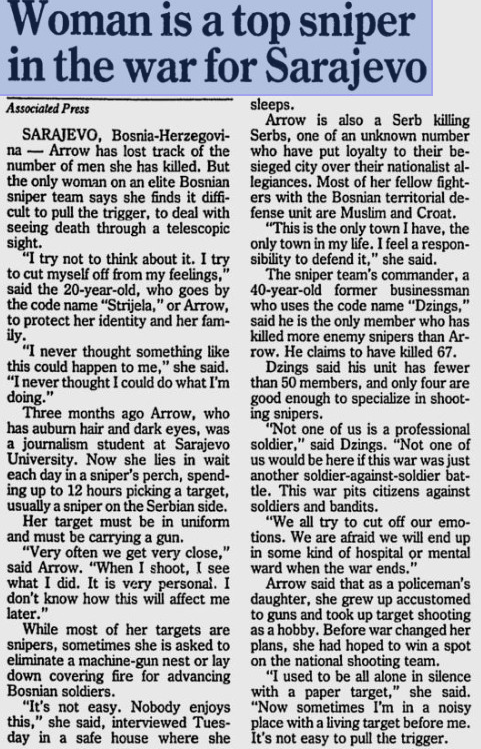 The whole conflict is a fascinating thing to study, because it really reveals the ways in which people will form fierce group identities, despite these identities being often quite random.

The former nation of Yugoslavia was an artificial construct put together by the Western Powers after WWI. Originally it was called the Kingdom of Serbs, Croats and Slovenes. Croats and Serbs are basically the same kinds of people, their languages are really close and their ethnicities are almost identical, but one is Catholic and one is Orthodox. So they hate each other. The Bosnians are also quite similar, but they’re Muslim. More hate.

During the breakup of Yugoslavia was the Bosnian Serbs, supported by the Serbian government of Slobodan Milošević and the Yugoslav People’s Army (JNA), mobilized their forces inside the Republic of Bosnia and Herzegovina in order to secure Serbian territory, then war soon spread across the country, accompanied by the ethnic cleansing of the Muslim Bosniak and Croat population. There were people who lived in Sarajevo but were ethnically Serb, and yet chose to fight on behalf of the native Bosnians because that’s where they were from. So in addition to religion, you’ve got “place of origin” as a marker of identity. Then you throw language into the mix and it gets even more complicated.

An old woman tearfully bids farewell to a relative as she escapes the besieged city – Sarajevo, Bosnia; ca. 1993 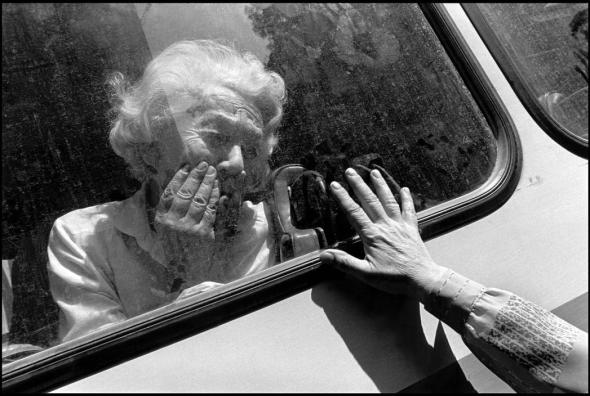