Really reminds you what war generally is: kids fighting and dying for the ideals/wishes/whims of older men, most of whom have never been in a dangerous situation in their lives.

Pretty much by the end of World War II, most people fighting for Germany in Berlin were part of the Hitler Youth and therefore under 18. Lots of stories came back from soldiers that saw teenage girls manning artillery cannons and 12 year old boys firing at Russian soldiers.

It’s really shocking when you realize that these people aren’t always grown men; in fact, lots of the time it’s quite the opposite.

To fight for a land fit for heroes,

God on my side, and a gun in my hand,

Chasing my days down to zero,

And I marched and I fought and I bled and I died,

And I never did get any older,

But I knew at the time that a year in the line,

Is a long enough life for a soldier.”

Russian Soldiers at the Battle of Stalingrad, 1943. 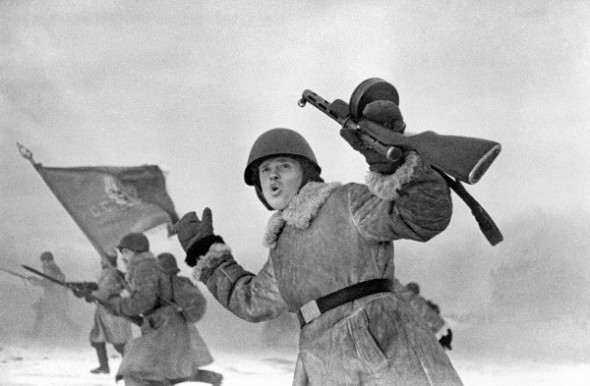 “If we go the other way our government will shoot us”

This photo was staged for propaganda purposes, like many other Soviet World War II photos. (This photo was made after the encirclement of the German Sixth Army.)