A captured soldier suffering from Shell Shock, The Somme; ca. 1916. 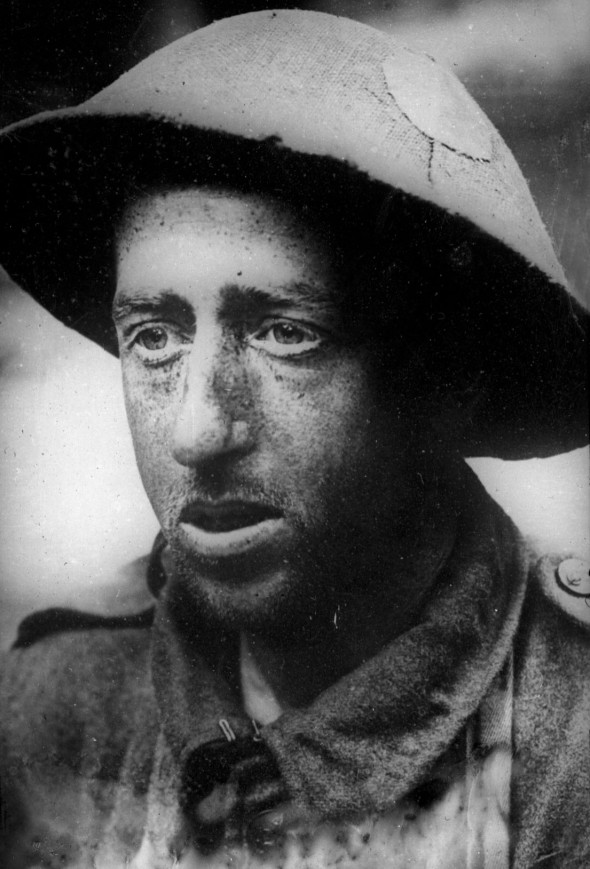 We often joke about “I’ve seen some shit”, but this is a representation of a visceral and downright frightening reality that someone people had to experience. I can’t imagine being subject to something so extreme that my brain had to shut everything down just to cope. His eyes are so hauntingly tragic.

Nothing in history prepared those men for what they faced.

“The worst thing about treating those combat boys from the Great War wasn’t that they had had their flesh torn, it was that they had had their souls torn out. I don’t want to look in your eyes someday, and see no spark, no love, no… no life. That would break my heart.” -Eugene Sledge Sr. (hoping to convince his son not to enlist in the Marines)

Early in the war, physicians began to handle cases of psychological breakdown, paralysis, and disturbing, uncontrolled physical behavior among men who had been in combat. C.S. Myers was one of the first to coin the term “shell shock,” as doctors assumed that artillery fire and the like had had caused concussion-like damage and possibly physical legions somewhere in the brain. Other doctors saw the same thing, but Myers discovered that many men experiencing these symptoms hadn’t been near artillery bombardments and so he tried to withdraw the term, but it stuck. The condition was called “soldier’s heart” in the American Civil War and “combat fatigue” in the Second World War, and now we call it PTSD. It’s not until 1980 that PTSD gets into the medical handbook as a legitimate syndrome, which means that doctors can treat it and that those who suffer from it can receive a pension. 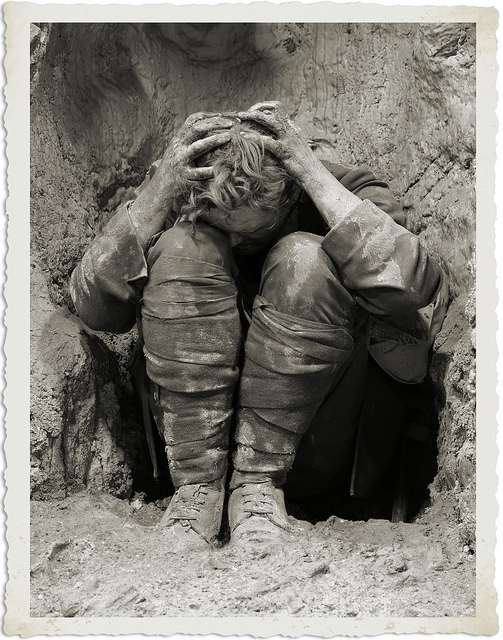 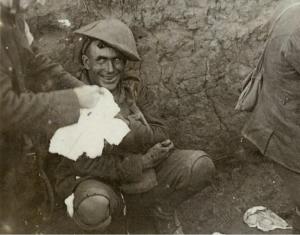 The medical profession of the time was conservative and relatively endogenous. Many of them thought that shell shock was a license for cowardice or a renunciation of “manliness,” which made it partly a problem of gender. It’s important to understand that although we usually think of PTSD as a psychological disability, it often manifests itself in physical ways. At the time, the conversion of mental symptoms to physical ones was called hysteria – a term reserved for women. This meant that men suffering from “hysteria” were transgressing Victorian gender norms, and we can see the stigma of this diagnosis clash with social conventions – only enlisted men were diagnosed with hysteria, while officers were diagnosed with “nervous breakdown.” The difference in diagnosis was paralleled by differences in treatment – treatment for enlisted men was largely punitive and coercive, while treatment for officers was based more on persuasion, sometimes through psychotherapy. Lest you think officers were in a better position, remember that the casualty rate for them was almost double that of enlisted men. 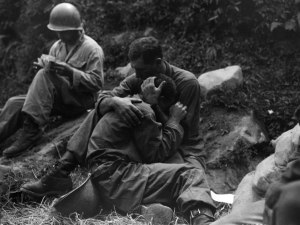 Diagnosis and treatment were further complicated by the difficulty in identifying who legitimately had a problem and who was just trying to get away from the front. For some physicians, the solution was to make treatments more painful than returning to the front. For example, electric shock therapy could be used on mutes to try and stimulate the tongue so that they would make noise. In Austria, future Nobel Prize winner Julius Wagner Jauregg was accused of torturing his patients because he used electroconvulsive shock treatment to discourage malingering. In general, the war tore up the Hippocratic Oath because doctors became servants of armies that needed men to return to the front as soon as possible. Thus, the principal aim of doctors was to heal the injured enough to send them back to the front. This meant that if a soldier had a physical wound in addition to psychological symptoms, doctors would often treat the wound and then send the soldier back. Treatments were thus largely coercive in nature – there’s a famous French story in which an army doctor told a soldier “Yes, you are going to get this.” The enlisted man responded, “No, I’m not.” “Yes you are, I’m your officer, I gave you an order.” The exchange continued back and forth until the doctor moved to put the electrodes on his forehead and the enlisted man knocked him out. The soldier was then court-martialed, found guilty, fined one franc, and dismissed from the army without a war pension. This is the sort of thing that contributed to desertion, especially from men who felt they had no way out. 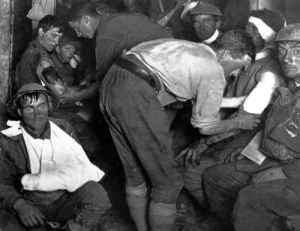 As you can see, there were numerous problems with the medical profession’s approach to the symptoms, diagnosis, and treatment of shell shock. Consequently, we really don’t know how many suffered from it. The British Army recorded 80,000 cases, but this likely underestimates the actual number. Regardless, we can be sure that a significant number of those that went through artillery barrages and trench warfare experienced something like it at some point. While the number is significant, it’s important to remember that a minority of soldiers suffered shell shock, and consequently it does fit into the spectrum of individual refusal.

In the late 90s there was a movement in England to apologize to those that refused to continue fighting in the war. There were 306 men that had been shot for cowardice or desertion and although the British government refused to make a formal apology, one of Tony Blair’s last acts as prime minister was to posthumously pardon them. The problem here should be obvious – it’s unclear how many were shell shocked and convicted of cowardice or desertion when they really were insane. There’s serious doubt as to how many men actually thought it through and decided that they couldn’t fight anymore and were going to leave. 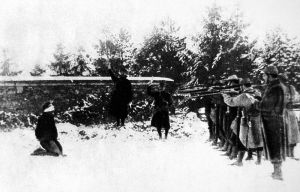 In the French case there was a terrible period at the beginning of the war when there were many summary executions. It’s a perfect example of what happened when officials and the professional army feared the effects that desertion might have on the rest of the men that had been mobilized at the start of the war. The French CiC, Joffre, felt that if offensives didn’t proceed because people were “allowed to act as cowards,” the rest of the mobilized army, made up of millions of reservists, would be contaminated. The upshot was the summary executions of numerous soldiers. The French parliament set up a special tribunal in 1932 to reexamine many of the cases, and a number of those who had been executed were subsequently pardoned, some on grounds that they had originally been denied the right of appeal despite being citizens. There is an important distinction to make here – French soldiers had the vote and could appeal to their representatives for better legal treatment, while millions of British soldiers could not since they were subjects of the crown. By the end of the war, every capital sentence required the approval of the French president. 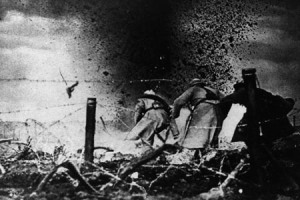 World War I was the first to really introduce mental illness to mass society. The notion of traumatic memory that was brought back home and reappeared in literature helped normalize mental illness in the absence of consensus by the medical profession as to what it was. Although PTSD existed long before the First World War, the circumstances of the war pushed hundreds of thousands of men beyond the limits of human endurance. They faced weapons that denied any chance for heroism or courage or even military skill because the artillery weapons that caused 60 percent of all casualties were miles away from the battlefield. The enthusiastic men that signed up in 1914 were loyal, patriotic, and genuinely believed that they were fighting to defend their homeland. While they consented to national defense, it’s not clear that they consented to fight an industrialized assembly-line murderous war that emerged after 1914. Unlike previous wars, there was no beginning, middle, and end. Trench warfare was seen as a prelude to a breakout, but those breakouts never really occurred. Many men withdrew from the reality of the war into their own minds, and in this sense shell shock can be seen as a mutiny against the war. PTSD has numerous symptoms, but among them is the sense that the war the soldier lived had escaped from human control. This is why many PTSD sufferers are constantly reliving the trauma – the horror of combat never goes away and time has no hold over it. 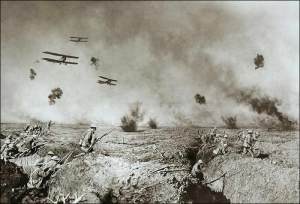 There’s a wonderful autobiography by Robert Graves called Good-Bye to All That; it’s one of the most famous World War I memoirs. Of course, the great irony is that he can’t say good-bye to all that – his life is constantly affected by his war experience, even 10 years after the war ended. There are so many great World War I memoirs, but I’d highly recommend the following: The Secret Battle by A.P. Herbert and The Case of Sergeant Grischa by Arnold Zweig Both deal with executions and the perversion of military justice during the war. I would also recommend The Legacy of the Great War and Remembering War. Both are by Jay Winter, who specializes in historical memory and World War I. (When he was teaching at Cambridge in the late 70s and early 80s, he traveled to Warwick hospital to study some of the records of patients that had been institutionalized there during the war for shell shock. When he went there, he discovered that there were still several men that had been kept in the asylum without treatment since the Great War. Once enthusiastic young men, psychologically crippled by the war, had spent the next 70 years constantly reliving their trauma, locked away from a society that didn’t understand what was wrong with them. I can’t think of a more horrible fate.)