With all the men fighting at the front, women of Moscow dig anti-tank trenches around Moscow, Battle of Moscow, Operation Barbarossa, World War II; ca. 1941 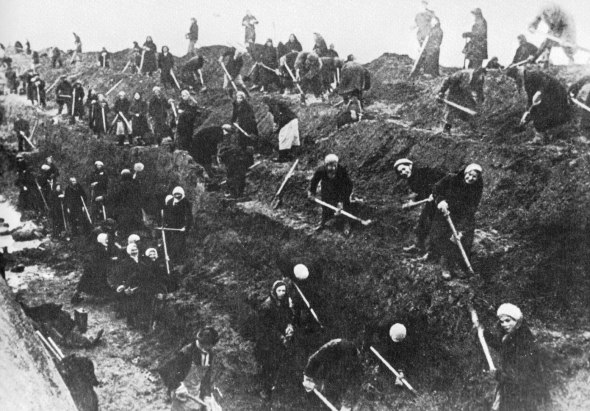 Operation Barbarossa: or the Beginning of the End for Hitler.

Operation Barbarossa was planned to carry out a swift land grab, with combat ending by Fall at the latest and pursuit following after. Hitler and the military commanders and staffs working under him generally agreed that the campaign’s casualties would be proportionately small (275,000 men according to Halder), the strain of combat on ammunition and fuel would be low after the first weeks, and the political system of the Soviet Union would be unable to handle such rapid defeats. Even before the air war over Britain was decided, the promise of swift and easy conquest of the Soviet Union proved too difficult to resist.

From its inception the plan was marked by several assumptions and flaws. First, the vast distances of the Soviet Union, while noted, were not properly addressed or prepared for. Second the pervasive racism of German military and political leadership caused them to demean Soviet capabilities, technology, and leadership, leading in turn to the assumption that the war would be short and easy. Third, the rivalry between the two main German military bodies, OKW (Oberkommando der Wehrmacht, High Command of the Armed Forces) and OKH (Oberkommando ders Heeres, High Command of the Army), led to friction, compartmentalization, and competition. The plan was as much about soothing egos and meeting racial expectations as achieving victory.

Marck’s initial concept representing OKH’s view, codenamed Operation Otto, was delivered to Hitler on August 5, 1940 and formed the basis for future variants of what would become Operation Barbarossa. His plan assumed that Moscow would be the campaign’s main objective that the war would last only “9 to 17 weeks”, and most importantly, that the Red Army’s 170 combat ready divisions, an inaccurate number, would be destroyed along the border west of the Dnieper River.

A second study, called the “Lossberg Study”, conducted separately by OKW called for a stronger focus on Ukraine and Leningrad, though Moscow would remain the central objective. It also was more concerned with the flanks of the Ostheer as it advanced into the interior of Russia than OKH’s proposal, concerns which would be repeated by Hitler later in the final plan. Though never presented to Hitler, it influenced subsequent planning by Goering and the Reich Ministry of Economics and from there likely reached his ears.

Halder presented OKH’s final plan, codenamed Operation Fritz, to Hitler on December 5, 1940, with the three objectives now being Leningrad, Moscow, and Kiev. The Red Army was assumed to be destroyed within 500 kilometers of the border within the first weeks of war, followed by a pursuit to the Archangelsk-Astrakhan Line.

On December 18, 1940, Hitler issued Fuhrer Directive 21, codenamed Operation Barbarossa, which was a synthesis of the past 3 months’ planning. In the final plan the Red Army was still to be destroyed near the border, with the assumption that future reserves could not be raised. Three Army Groups, North, Center, and South, would advance on Leningrad, Moscow, and Kiev, respectively. However, the plan stressed that while Moscow was the most important objective Army Group Center should be diverted to assist Army Groups North and South if they failed to seize their objectives. Rambling and vague, Directive 21 failed to resolve the disputes planning had opened and in fact was a plan only to defeat the Red Army, not the Soviet Union as a whole.

The planning for Operation Barbarossa was marred by a number of problems. Most importantly, logistics and the factor of space were never addressed; Martin Crevald in Supplying War notes that an absurd number of problems were swept under the rug, from fuel consumption to rolling stock. German planners also lacked a unity of command which led to a mixture of objectives and no clear focus. OKH and OKW had each had their own assumptions about what objective would achieve final victory, and forces were diluted along the Northern, Central, and Southern axis to achieve all of them; the Germans entered the campaign with only the vaguest idea of what success meant. Finally, racism towards Slavs caused the Germans to underestimate their opponents and ignore potential problems, maintaining confidence that ultimate victory could be achieved quickly and easily.

German planning for Barbarossa was confused and unrealistic, to the point of absurdity. Thus it’s impossible to look at Barbarossa vs Sealion from a rational standpoint as Hitler and his inner circle were driven by irrational assumptions in their decision to go to war. Adam Tooze uses the phrase “mad logic”, and I think that best sums it up; Barbarossa seemed like the best option within their own worldview, even if today its flaws are easily apparent to us.

The Strategy of Barbarossa by Austin C. Wedemeyer