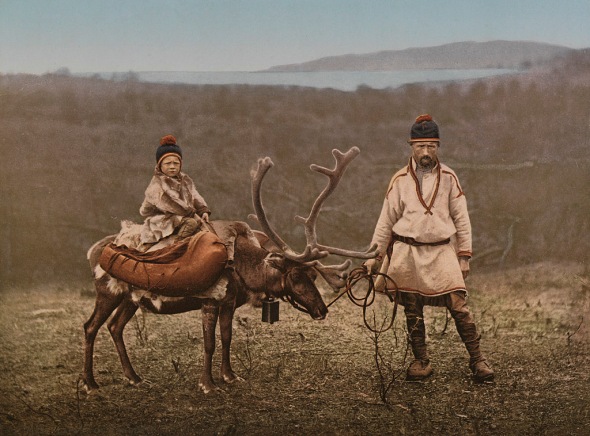 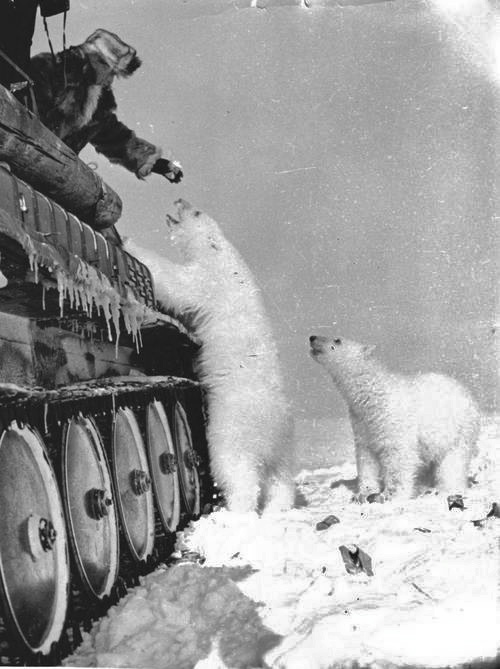 Blue marble. The most famous picture of our planet, taken by the crew of the Apollo 17 on December 7, 1972. 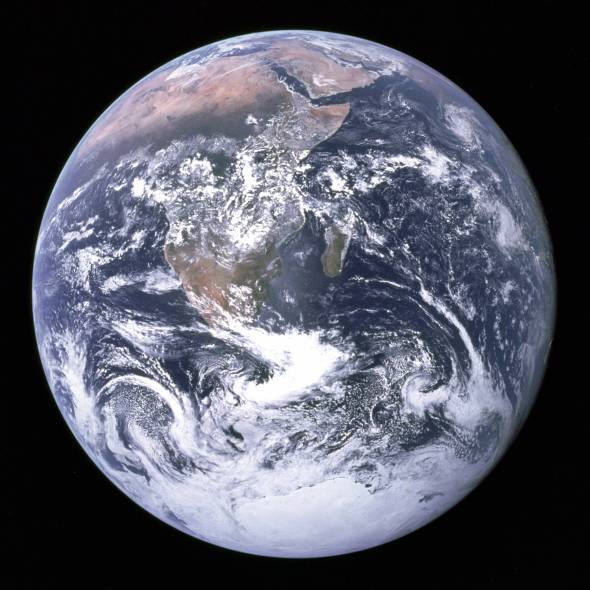 Fun fact, the original picture was taken “upside-down.” They changed the orientation after.

Here’s the original orientation for comparison. Africa, the Arabian Peninsula, and part of Antarctica are in the picture.

The Eruption of Mt. St. Helens 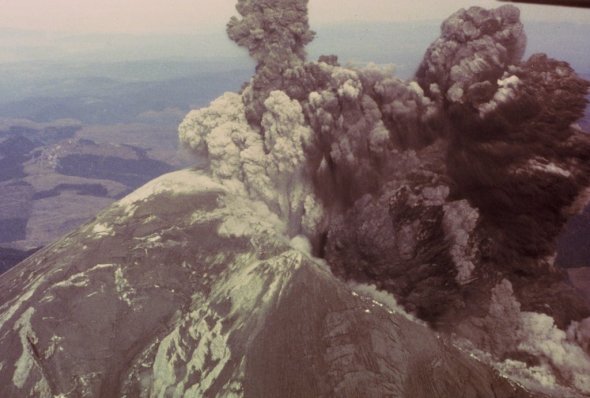 On May 18, 1980, Mount St. Helens, a volcano located in the Cascade Range in the state of Washington, erupted at 8:32:17 am, causing the entire weakened north face to slide away, suddenly exposing the partly molten, gas-and-steam-rich rock in the volcano to lower pressure. The rock responded by exploding a very hot mix of lava and pulverized older rock toward Spirit Lake so quickly that it avoided the avalanching north face. The explosion caused over a billion U.S. dollars in damage and resulted in 57 human deaths. (Source) 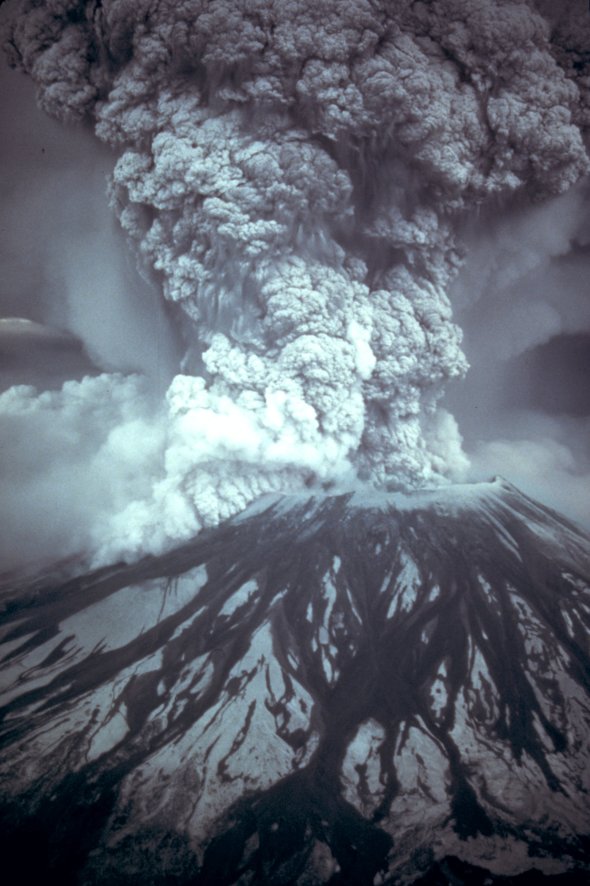 I think it’s hard to comprehend how massive of an event this was. When the north face gave way to a landslide that morning, more than 1/2 a CUBIC MILE of debris slid down the mountain at 155 mph into Spirit Lake, displacing all the water in the lake via 600 ft waves the other way. Then because of the landslide the mountain was open to blast upwards resulting in the ash cloud above.

Then, it’s pyroclastic flow time. Imagine a cloud of 1,830°F rocks, pumice, and ash accelerating down the mountain face at 670 mph obliterating trees and everything else for about 20 miles.

Oh, and all that happened in 90 seconds. 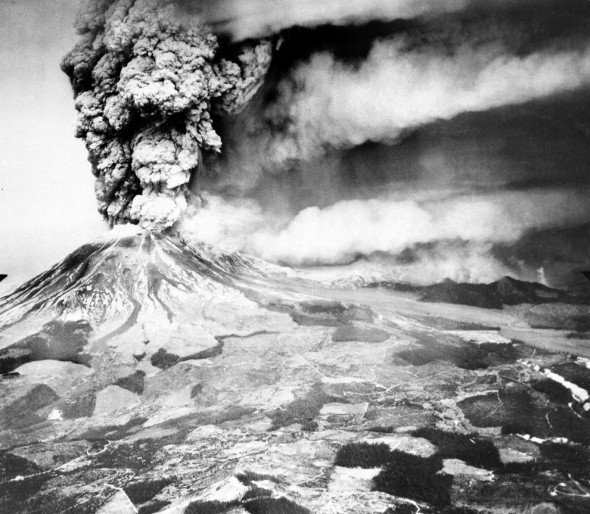 I’m glad we live in a world where there’s probably a camera filming most mega awesome events like this. 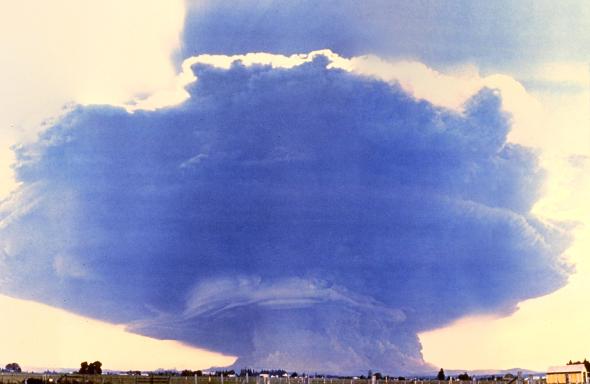 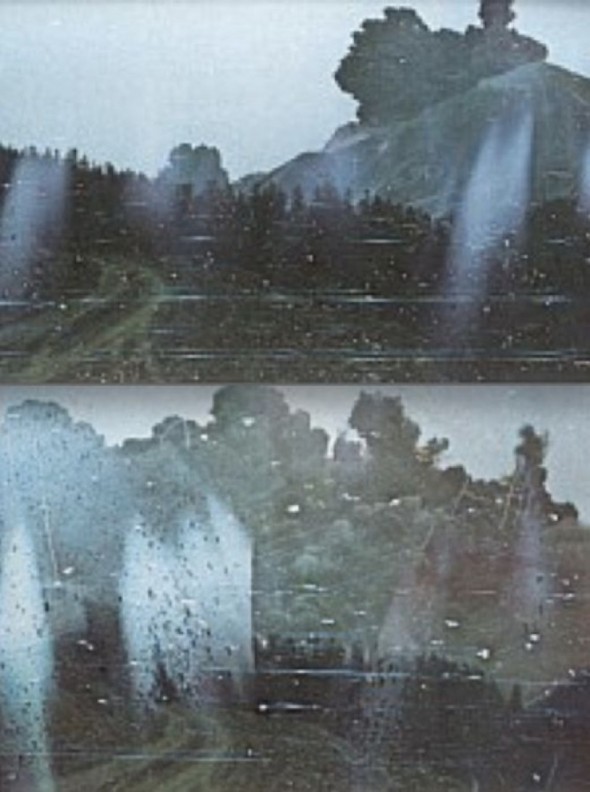 The Mount St. Helens eruption – Photos taken by Robert Landsburg before he was incinerated by the ash cloud.

“When Mount St. Helens erupted on May 18, 1980, photographer Robert Landsburg was there – within a few miles from the summit, shooting away. Landsburg had spent several weeks prior to the eruption documenting the volcano, putting himself on the precipice of danger.

On May 18, Landsburg’s luck ran dry. Seeing the immanent explosion in the not-so-distant distance, Landsburg decided he could not escape the eruption in time to save his own life. And so, he used his body to save his film.

Landsburg continued to photograph the eruption until the last possible moment, leaving himself enough time to wind up his film into its case, place his camera in its bag, place that bag into his backpack, and lay his body on top of the bag as the final protective layer against the shower of magma and ash.

Landsburg’s body was found 17 days later, buried in ash with his film in tact. The photographs were published in the January 1981 issue of National Geographic…”

(For anyone interested, here is another photo that Landsburg took that day. It’s pretty damaged, but you can still make out the image.)

He covered the camera with his own body after watching a volcano explode from a few miles away!!! He had the composure and foresight to put the camera in his backpack before shielding it from scalding hot volcanic ash with himself while he died a Pompeii style death. Whatever his last thought was, it included a life-time supply of badass.

The guy who took these shots barely got out alive. There’s amazing video he shot as he was overtaken by the ash cloud, and he is talking to the camera, describing what he thinks is his death (2:13):

(…he was surprisingly chill about thinking he was dead…) 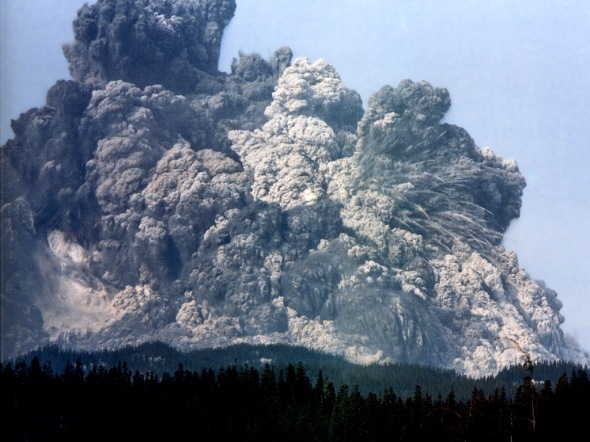 Oh, I would like to state that due to the steadfast commitment of some of the geologists and volcanologists who were observing the area before the eruption to the safety of the public was an enormous factor in the relatively small death count. (The scientists who died on the mountain are heroes.)

“Famous for telling reporters that being on the mountain was like “standing next to a dynamite keg and the fuse is lit”, Johnston had been among the first volcanologists at the volcano when eruptive signs appeared, and shortly after was named the head of volcanic gas monitoring. Though a careful analyst, Johnston strongly believed that scientists needed to take this risk for themselves in order to prevent civilian deaths, and therefore chose to partake in dangerous on-site monitoring. He and several other volcanologists prevented people from being near the volcano during the few months of pre-eruptive activity, and successfully fought pressure to re-open the area. Their work kept the death toll at a few tens of individuals, instead of the thousands who possibly could have died had the region not been closed off. Johnston supported the lateral blast theory: he believed the explosive eruption would be ejected sideways out of the volcano, not upward. He also believed that the eruption would originate from the bulge. Because of this, he was more aware than most of the threat of a north-directed eruption.” (Source) 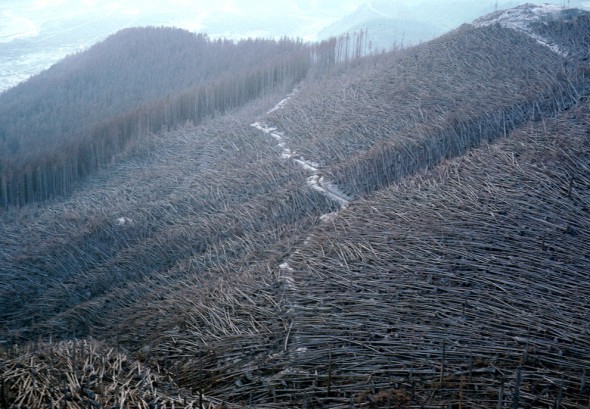 Fifty-seven people were killed ( including innkeeper Harry R. Truman, photographer Reid Blackburn and geologist David A. Johnston), 200 houses, 27 bridges, 15 miles (24 km) of railways and 185 miles (298 km) of highway were destroyed, and Mount St. Helens was left with a crater on its north side. U.S. President Jimmy Carter surveyed the damage and said it looked more desolate than a moonscape A film crew was dropped by helicopter on St. Helens on May 23 to document the destruction. Their compasses, however, spun in circles and they quickly became lost. A second eruption occurred the next day, but the crew survived and were rescued two days after that. The eruption ejected more than 1 cubic mile (4.2 km3) of material. A quarter of that volume was fresh lava in the form of ash, pumice and volcanic bombs while the rest was fragmented, older rock. The removal of the north side of the mountain (13% of the cone’s volume) reduced St. Helens’ height by about 1,280 feet (390 m) and left a crater 1 to 2 miles (2 to 3 km) wide and 2,100 feet (640 m) deep with its north end open in a huge breach.

More than 4,000,000,000 board feet (9,400,000 m3) of timber was damaged or destroyed, mainly by the lateral blast.At least 25% of the destroyed timber was salvaged after September 1980. Downwind of the volcano, in areas of thick ash accumulation, many agricultural crops, such as wheat, apples, potatoes and alfalfa, were destroyed. As many as 1,500 elk and 5,000 deer were killed, and an estimated 12 million Chinook and Coho salmon fingerlings died when their hatcheries were destroyed. Another estimated 40,000 young salmon were lost when they swam through turbine blades of hydroelectric generators when reservoir levels were lowered along the Lewis River to accommodate possible mudflows and flood waters.

In all, Mount St. Helens released 24 megatons of thermal energy, 7 of which was a direct result of the blast. This is equivalent to 1,600 times the size of the atomic bomb dropped on Hiroshima. 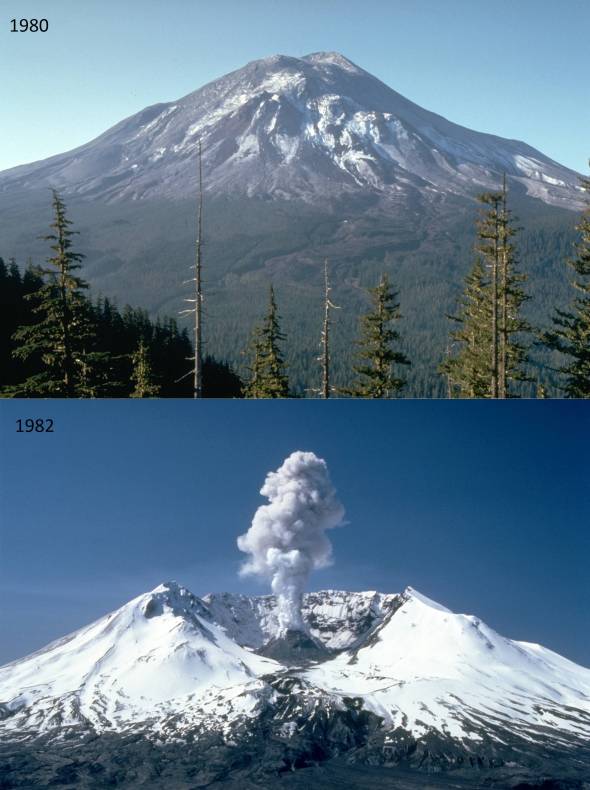 Mount St. Helens before and after its eruption.

Here is a map of the blast zone. I’m always amazed by the sheer force of these eruptions. 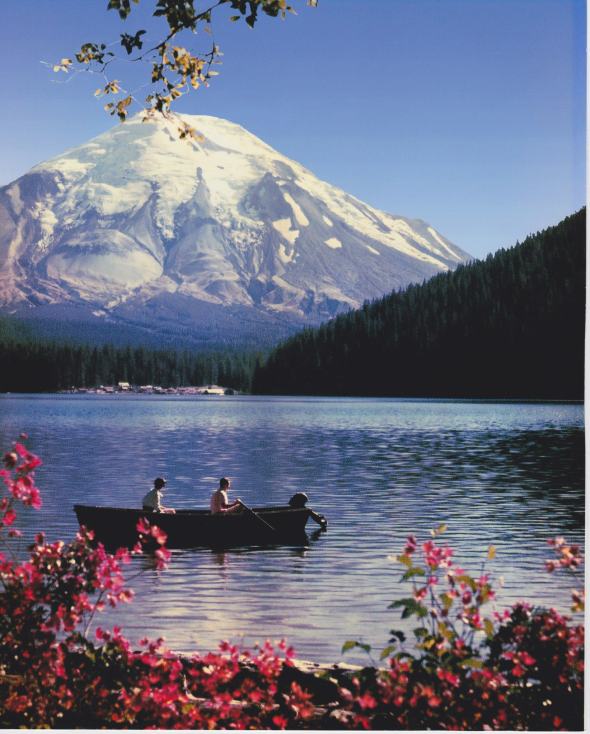 Mt. St. Helens before the eruption. 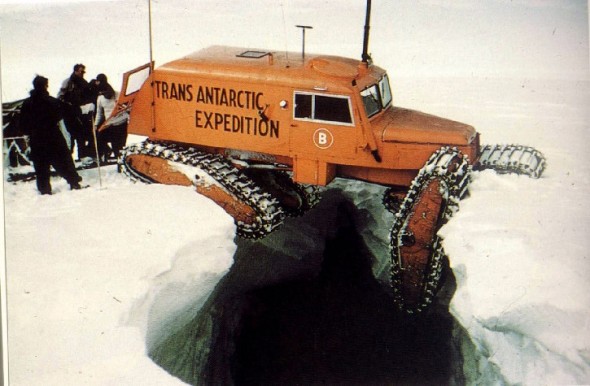 Herbivorous megafauna are typically imagined as a group that includes elephants, rhinoceros, and giraffes. However, one of the most spectacular examples of megafauna is a bovine from India. At 3 meters (10 ft) tall, the gaur is a truly gargantuan beast, and the world’s largest wild cow species. This massive creature with truly formidable horns crashes through Indian forests and fields, and sometimes invades gardens. While it’s a threatened species due to poaching and habitat loss, it’s a match for most threats and weighs up to 1,600 kilograms(3,500 lbs). Among the megafauna that crash and devour their way through tropical vegetation, only the elephants, rhinoceros, and giraffes are bigger or taller. The gaur is more docile than African buffalo, but human fatalities do occur now and then. In one case, a gaur was attacked by a tiger. The gaur responded by literally snapping the tiger in half.