A bulldog named Venus stands at the helm of the HMS Vansittart, a British Destroyer; ca.1941 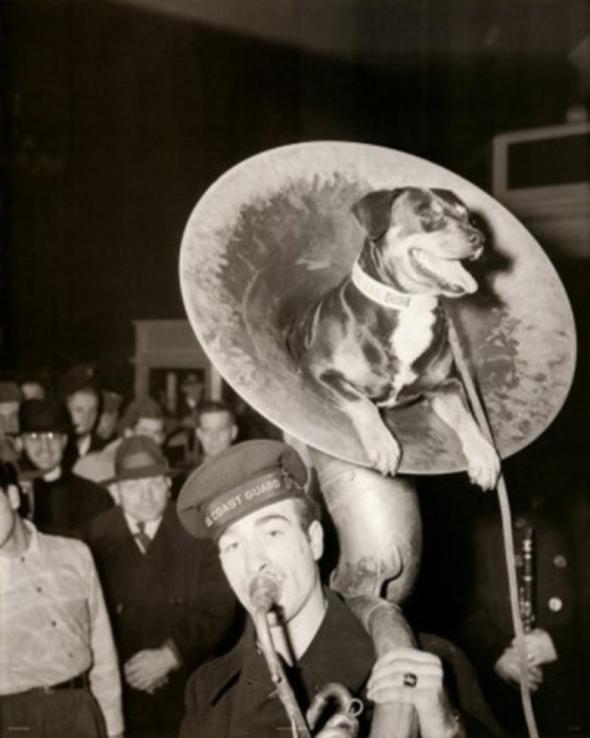 The crew of the Coast Guard cutter Campbell adopted a mixed-breed puppy in 1938.  Little did they know that their canine companion would become a world famous Coast Guard veteran.  He was, literally, a member of the crew, complete with all the necessary enlistment forms and other official paperwork,  uniforms, and his own bunk.  He sailed on board the combat-tested cutter through World War II and saw much action, both at sea and in port.  As Life Magazine reported: “An Old Sea Dog Has Favorite Bars and Plenty of Girls in Every Port.”  Until recently he had the honor and distinction of being the only Coast Guardsman to be the subject of a biography!  It was Sinbad of the Coast Guard, written by Chief Specialist George R. Foley, USCGR and published by Dodd, Mead and Company of New York during the war. The book made him an international celebrity.

Although he served honorably, he did run into a bit of trouble on occasion, as any sailor might during a long career at sea.  He caused an international incident in Greenland, another in Casablanca, and was busted in rank a few times for minor infractions.  As another author noted:

“Sinbad is a salty sailor but he’s not a good sailor. He’ll never rate gold hashmarks nor Good Conduct Medals.  He’s been on report several times and he’s raised hell in a number of ports.  On a few occasions, he has embarrassed the United States Government by creating disturbances in foreign zones.  Perhaps that’s why Coast Guardsmen love Sinbad, he’s as bad as the worst and as good as the best of us.”

Regardless of the fact that he liked to blow off a little steam while on liberty, he was a brave and capable sailor when he was on duty.  He earned the respect and affection of his shipmates during one famous battle when the Campbell fought it out with the Nazi submarine U-606.  The cutter was severely damaged during the fight and the commanding officer ordered all but essential personnel off the ship. They transferred to a nearby destroyer but a tough and hardy few stayed on board the Campbell while the cutter was towed to safety, patching her hull and ensuring that she stayed afloat during the voyage.  Among that few was Sinbad.

He served faithfully on board Campbell for eleven years, garnering more sea time than most of his contemporaries, before finally retiring to the Barnegat Light Station.  He passed away 30 December 1951 and was laid to rest beneath the station’s flagstaff.

American soldiers relax with their mascot, “Axis Sally,” which was “liberated” during the battle for control of the Anzio beachhead; ca. 1944.

The Anzio bridgehead was held for the price Of a few hundred ordinary lives.

Togo the cat was a mascot of the HMS Dreadnought, ca. 1900’s

The launch of the H.M.S. Dreadnought in 1906 was quite a big deal. The new “all-big gun” design of the battleship was revolutionary for the era, not to mention her steam-turbines – never having been used on a warship of her size before.

As such, she gave her name not only to the class of ship (of which she was the only one, the Bellerophon-class immediatly following her with minor improvements to the design, mainly for torpedo protection), but to the entire style, as all those preceding her were immediately seen as obsolete.

The HMS Dreadnought sported a compliment of ten 12-inch guns – which Togo seems to use as a playground – paired into five turrets, four guns facing aft, two guns to the bow, and two each on either flank, allowing an eight gun broadside to either side.

Visible on top of the turret is one of the 12-pndr guns originally placed atop the casements. This were later abandoned when it was realized not only that the crews were left terribly exposed when manning them, but also that the vibrations of the main guns damaged their smaller compliments.

Photo part of the collection of the Imperial War Museum.

The Life And Times Of The MGM Lion.

One glorious hair toss of that mane and you’ve got yourself a L’Oréal advert.