Troops of the eight allied nations during the Boxer Rebellion. 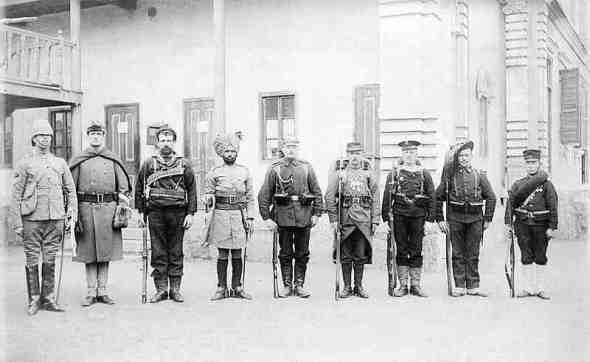 They are, from left to right: British, American, Russian, Indian, German, French, Austro-Hungarian, Italian and Japanese.

The Boxer Rebellion, Boxer Uprising or Yihetuan Movement was an anti-imperialist uprising which took place in China towards the end of the Qing dynasty between 1898 and 1900. It was initiated by the Militia United in Righteousness (Yihetuan), known in English as the “Boxers,” and was motivated by proto-nationalist sentiments and opposition to foreign imperialism and associated Christian missionary activity. The Great Powers intervened and defeated Chinese forces.

The uprising took place against a background of severe drought, and the disruption caused by the growth of foreign spheres of influence. After several months of growing violence against the foreign and Christian presence in Shandong and the North China plain, in June 1900 Boxer fighters, convinced they were invulnerable to foreign weapons, converged on Beijing with the slogan “Support Qing government and exterminate the foreigners.” Foreigners and Chinese Christians sought refuge in the Legation Quarter. In response to reports of an armed invasion to lift the siege, the initially hesitant Empress Dowager Cixi supported the Boxers and on June 21 declared war on foreign powers. Diplomats, foreign civilians and soldiers as well as Chinese Christians in the Legation Quarter were placed under siege by the Imperial Army of China and the Boxers for 55 days. Chinese officialdom was split between those supporting the Boxers and those favoring conciliation, led by Prince Qing. The supreme commander of the Chinese forces, the Manchu General Ronglu (Junglu), later claimed that he acted to protect the besieged foreigners. The Eight-Nation Alliance, after being initially turned back, brought 20,000 armed troops to China, defeated the Imperial Army, and captured Beijing on August 14, lifting the siege of the Legations. Uncontrolled plunder of the capital and the surrounding countryside ensued, along with the summary execution of those suspected of being Boxers.

The Boxer Protocol of September 7, 1901 provided for the execution of government officials who had supported the Boxers, provisions for foreign troops to be stationed in Beijing, and 450 million taels of silver—more than the government’s annual tax revenue—to be paid as indemnity over the course of the next thirty-nine years to the eight nations involved. (Source)