The Death of Edith Cavell 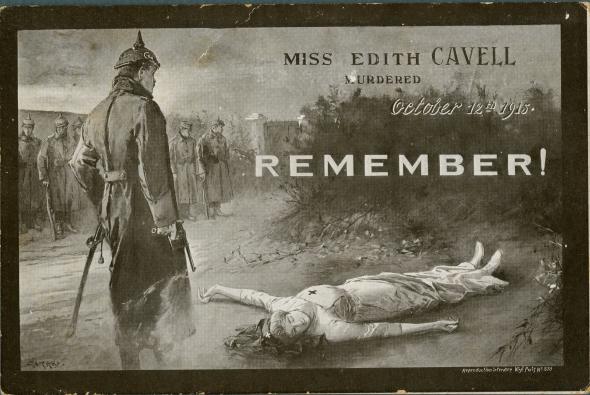 Edith Cavell (4 December 1865 – 12 October 1915) was a British nurse and patriot. She is celebrated for saving the lives of soldiers from both sides without distinction and in helping some 200 Allied soldiers escape from German-occupied Belgium during World War I, for which she was arrested. She was subsequently court-martialled, found guilty of treason and sentenced to death. Despite international pressure for mercy, she was shot by a German firing squad. Her execution received worldwide condemnation and extensive press coverage.

According to Wikipedia: In November 1914, after the German occupation of Brussels, Cavell began sheltering British soldiers and funneling them out of occupied Belgium to the neutral Holland. Wounded and derelict British and French soldiers and Belgians and French of military age were hidden from the Germans and provided with false papers by Prince Reginald de Croy at his château of Bellignie near Mons. From there, they were conducted by various guides to the houses of Cavell, Louis Séverin and others in Brussels, and furnished by them with money to reach the Dutch frontier and with guides obtained through Phillipe Baucq. This placed Cavell in violation of German military law.

She was arrested on 3 August 1915 and charged with harboring Allied soldiers. In her court-martial she was prosecuted for aiding British and French soldiers, in addition to young Belgian men, to cross the border and enter Britain. She admitted her guilt when she signed a statement the day before the trial, thus reaffirming the crime in the presence of all other prisoners and lawyers present in the court at the beginning of the trial. Cavell gave the German prosecution a much stronger case against her when she declared that the soldiers she had helped escape thanked her in writing when arriving safely in Britain. This admission proved hard to ignore because it not only confirmed that Cavell had helped the soldiers navigate the Dutch frontier, but it also established that she helped them escape to a country at war with Germany.

The night before her execution, she told the Reverend Stirling Gahan, the Anglican chaplain who had been allowed to see her and to give her Holy Communion, “Patriotism is not enough, I must have no hatred or bitterness  towards anyone.”  These words are inscribed on her statue in St Martin’s Place, near Trafalgar Square in London. Her final words to the German Lutheran prison chaplain, Paul Le Seur, were recorded as, “Ask Father Gahan to tell my loved ones later on that my soul, as I believe, is safe, and that I am glad to die for my country.”

She was shot by a German firing squad at Tir National shooting range in Schaerbeek, at 6:00 am on 12 October 1915.

“Someday, somehow, I am going to do something useful, something for people. They are, most of them, so helpless, so hurt and so unhappy.”

Cavell is one of many figures in history who have left an indelible mark on the world.