A self-firing rifle improvised by the Anzacs during their evacuation from Gallipoli, used to deceive the Ottomans into thinking that the Anzacs still occupied their trenches; ca. 1915

Fire was maintained from the trenches after the withdrawal of the last men, by rifles arranged to fire automatically. This was done by a weight being released which pulled the trigger. Two kerosene tins were placed one above the other, the top one full of water and the bottom one with the trigger string attached to it, empty. At the last minute, small holes would be punched in the upper tin; water would trickle into the lower one, and the rifle would fire as soon as the lower tin had become sufficiently heavy. Another device ran a string, holding back the trigger, through a candle, which slowly burnt down, severed the string, and released the trigger.

Such devices provided sporadic firing which helped convince the Turks that the Anzac front line was occupied long after thousands of men had crept down to the beaches and escaped. British generals estimated that half the force would be lost in any attempt to withdraw because the Turks could not fail to notice as the trenches were so close. In the event, the Turks were so deceived that 80,000 men were evacuated with only about half a dozen casualties. 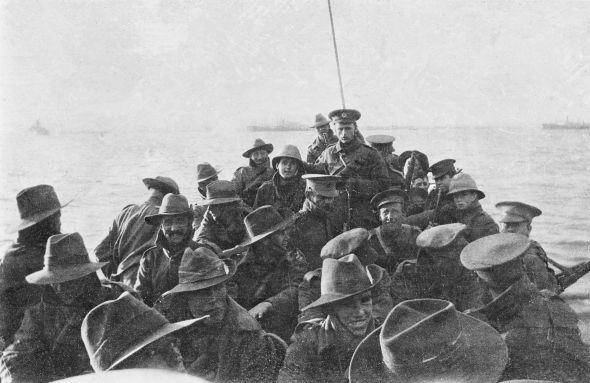 Nearly a full third of the initial invasion force, over 300 men, were cut down within 30 seconds of landing on the beaches. Most died even before they could get off the boats. Cut down by sniper and machine gun fire.

The planning of the invasion was done on flawed drawings of what the captains “thought” the terrain would be. In reality, the ANZACS faced an almost sheer cliff that was riddled with emplaced Turkish machine guns and snipers. Add that to the fact that the initial landing forces were over 1km north of where they should have been and that is already a recipe for disaster.

The fleet conducted a shelling campaign ON THE WRONG BEACH. The beach the invasion force landed at was untouched by artillery fire.

Even if they had correct information, and had landed at the correct site, they still would have been fighting desperate men and women who knew every centimeter of that peninsula, led by a fearless and frankly brilliant commander who was able to push them further than anyone thought.

The lack of forward momentum meant that the trenches were dug, and no one could move. Supply lines were nearly non-existent, and the re-use of latrine pits meant dysentery and other diseases wreaked havoc on the invasion forces, decimating both people and morale.

The ANZACs were not just fighting the Turks, they were fighting disease, they were fighting the very land itself. An insufficiently planned and researched operation with frankly idiotic execution that cost thousands of lives, both ANZAC and Turkish, simply so Churchill could garner himself some kudos. It could never have worked, it was never going to work, and with a little more care and planning, it could have easily been avoided.

“Those heroes that shed their blood, And lost their lives. You are now lying in the soil of a friendly country. Therefore rest in peace. There is no difference between the Johnnies, And the Mehmets to us where they lie side by side, Here in this country of ours. You, the mothers, Who sent their sons from far away countries, Wipe away your tears, Your sons are now lying in our bosom, And are in peace, After having lost their lives on this land they have, Become our sons as well.”