Fireball of Castle Bravo, the largest nuclear device ever detonated by the United States of America. The picture was taken from about 40,000 feet, Bikini Atoll; ca. 1954 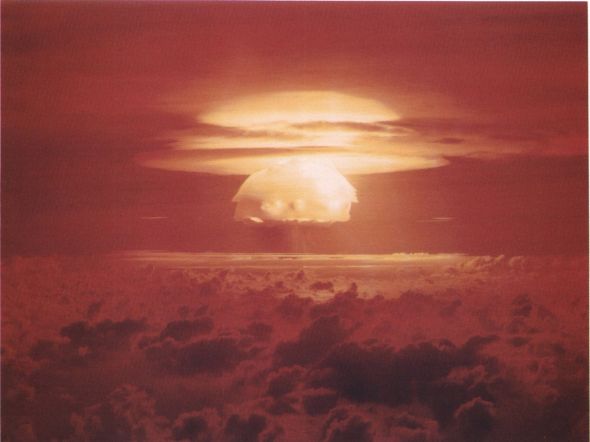 The photo was taken from a plane flying 75 nautical miles from ground zero, from an altitude of 12,500 feet. The fireball is over 4 miles wide.

A Japanese fishing boat, Daigo Fukuryu Maru, came in direct contact with the fallout. The fallout, fine white flaky dust of calcinated Bikini Island coral, had absorbed highly radioactive fission products, and fell on the ship for three hours. The fishermen scooped it into bags with their bare hands. The dust stuck to surfaces, bodies and hair; after the radiation sickness symptoms appeared, the fishermen called it shi no hai (死の灰?, death ash). The crew members, suffering from nausea, headaches, burns, pain in the eyes, bleeding from the gums, and other symptoms, were diagnosed with acute radiation syndrome and admitted to two Tokyo hospitals. Seven months after the test on September 23, chief radio operator Mr. Aikichi Kuboyama, 40, died — the first Japanese victim of a hydrogen bomb. He left these words: “I pray that I am the last victim of an atomic or hydrogen bomb.”

This resulted in an international uproar and reignited Japanese concerns about radiation, especially in regard that Japanese citizens were once more adversely affected by U.S. nuclear weapons.

The Japanese and U.S. governments quickly reached a political settlement and paid out US$2 million to the surviving victims, each receiving about ¥ 2 million each ($5,550 in 1954, $47,400 in 2013). It was also agreed that the victims would not be given Hibakusha status.