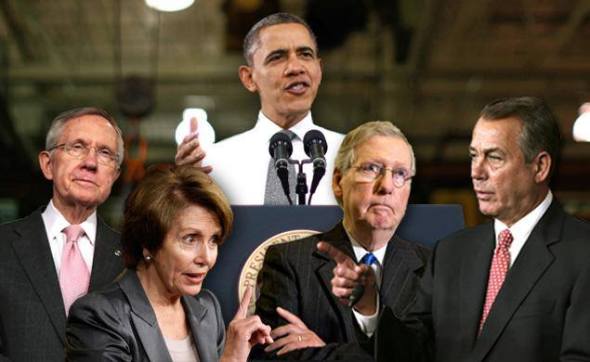 This meaningless shutdown of the United States Federal Government has entered day 14 and we are still careening towards this coming Thursday’s economic default. So I guess I’ll keep annotating this international embarrassment of a continuing crisis in our government:

Thursday is not the day we hit the debt ceiling. That day, when treasury cannot authorize any additional debt, has already passed. Starting on Thursday, the treasury department can no longer guarantee that they can pay out all incoming bills.

When a business has more money to pay out then it has coming in, it has three choices: 1. Take on debt to pay the difference 2. Renegotiate the debts/cut its spending 3. Go into default.

Where the business/government comparison splits is in how much easier it is for the government to choose option one or two over option three. Because a business might not be able to take out more debt (if the market doesn’t think it is credit worthy), and negotiating over its outstanding debt is incredibly difficult given the advantages creditors have in bankruptcy proceedings. Cutting spending as a business is also hard because market forces tend to make businesses run as lean as possible to begin with, so there isn’t much “fat” to cut.

The government, on the other hand, has complete control over how much it has to spend. Even if they are “legally” obligated to pay things like social security or medicare, they are also the ones who get to define what they are legally obligated to pay. So in short, if they passed a law saying they no longer have to pay social security checks…then they don’t have to pay that debt anymore.

And as far as issuing debt goes…if you are a country (like the United States) that controls its own currency…you can (short of a law saying you cant) ALWAYS take on more debt to pay your bills. The Federal reserve is obligated by law to buy whatever debt the gov’t sells it even if there is no other commercial buyers. And the Fed is able to do this because they have infinite money…ie they are the ones who “create cash”.

Both of these facts have, up until the past couple years, made US debt the absolute safest place on earth to put your money. Because if you control what you owe, and you control the money supply, then theoretically you should never have to go with option three…ie Default. And with a recessed global economy where there is more of an emphasis on a return “of” capital rather than a return “to” capital…ALOT of people/mutual funds/banks/government put their cash in US debt.

Let me insert another key concept that markets and economics depends on…the concept of the rational actor. It says that, all else being equal…people/companies/markets/governments aren’t stupid. They will choose what is best for them over other worse options. This key concept makes markets stable, because it makes all of the actions of actors in that market more predictable.

And up until Thursday, the market knows that the US government wont intentionally not pay its bills when the penalty for doing so is so much more severe than the other options presented to it. The penalty for cutting spending is political, the penalty for issuing debt is economic but manageable (given a long list of time tested tools we have to control inflation)….the penalty for outright refusing to pay your debts are catastrophic.

So in short, what happens on Thursday when the US declares that it wont/cant honor its debts? I don’t know…what happens when Goldman Sachs decides to liquidate all of its assets and burn, literally light on fire, all of its cash?

But whatever it is….we know its not good.

I really want to see John Boehner and Barack Obama fight in THUNDERDOME!!!