The last photo of the Far Eastern Party. Two of them would never make it home; ca. 1912 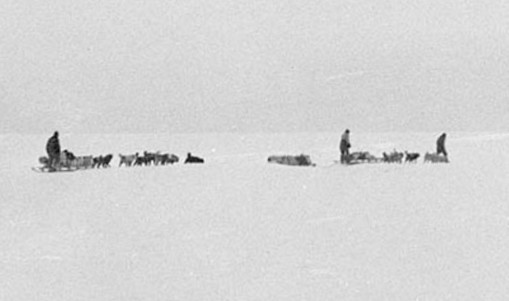 The leading theory as to why the two expedition members died is hypervitaminosis A from eating their own husky sled dog’s livers.

(A gripping account of Douglas Mawson’s 1912-13 Antarctic expedition. Unimaginable hardship in the cause of science. Mawson’s hair fell out, skin peeled off. He survived only by bathing his eyes in cocaine and eating his dogs)

This story reminds me of the time when it was about 30 degrees (F) and I had to walk about three blocks to get some chips. I made it, but on the way back, I actually pulled out liner gloves and put them under my regular gloves, as I had packed them in my coat, along with other provisions. Slipping more than once on the way, I had to bend my knees to keep from falling in the snow that was a record 2 inches deep. Unexpectedly high winds made the last block nearly impassable on the sidewalk and I actually had to revert to walking along the street, which had not yet been cleared — and it wouldn’t be clear for a whole day due to the demands of this unheard of weather phenomenon of 2 inches of snow in early December. When I finally arrived, the I found that many of the chips had been broken from the rigors of the journey. So, I can identify.