Leonid Rogozov removing his own appendix at a Soviet research station in Antarctica; ca. 1961

From September 1960 until October 1962, Rogozov worked in Antarctica, including his role as the sole doctor in a team of thirteen researchers at the Novolazarevskaya Station, which was established in January 1961.

On the morning of 29 April 1961, Rogozov experienced general weakness, nausea, and moderate fever, and later pain in the lower right portion of the abdomen. All possible conservative treatment measures did not help. By 30 April signs of localized peritonitis became apparent, and his condition worsened considerably by the evening. Mirny, the nearest Soviet research station, was more than 1,600 km (1,000 mi) from Novolazarevskaya. Antarctic research stations of other countries did not have an aircraft. Severe blizzard conditions prevented aircraft landing in any case. Rogozov had no option but to perform the operation on himself.

The operation started at 02:00 local time on 1 May with the help of a driver and meteorologist, who were providing instruments and holding a mirror to observe areas not directly visible, while Rogozov was in a semi-reclining position, half-turned to his left side. A solution of 0.5% novocaine was used for local anesthesia of the abdominal wall. Rogozov made a 10–12 cm incision of the abdominal wall, and while opening the peritoneum he accidentally injured the cecum and had to suture it. Then he proceeded to expose the appendix. According to his report the appendix was found to have a dark stain at its base, and Rogozov estimated it would have burst within a day. The appendix was resected and antibiotics were applied directly into the peritoneal cavity. General weakness and nausea developed about 30–40 minutes after the start of the operation, so that short pauses for rest were repeatedly needed after that. By about 04:00 the operation was complete. (Wikipedia) 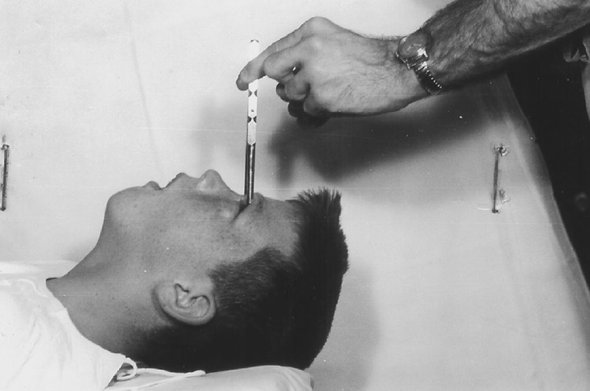 Freeman recommended Dully receive the procedure after the boy’s stepmother sought his help with problems she was having with Dully at home.

(Dully had no mental problems and the lobotomy was completely unnecessary. His stepmother was basically a horrible woman who wanted to get rid of Dully, and his father sort of rolled over and went along with it. Amazingly, he had no mental problems from the procedure. He was sent to asylums and group homes for most of his childhood, but amazingly went on to live a relatively normal life.)

Dr. Freeman was a terrible person, who went around lobotomizing people for no particular reason, rendering most of them brain damaged for the rest of their lives.

From Freeman’s notes: “Howard is rather evasive about talking about things that go on in the home. Howard seems to have poor muscular control. He objects to going to bed, but then sleeps well. He does a good deal of daydreaming. He turns the room lights on when there’s broad sunlight outside. He hates to wash. He puts on a sweater on the hottest days and goes without an undershirt on chilly ones. I think it would be pretty much of a shame to wish Howard on anybody. I explained to Mrs. Dully that Howard was unapproachable by psychotherapy and that the family should consider the possibility of changing Howard’s personality by means of transorbital lobotomy. Mrs. Dully said it was up to her husband. I would have to talk to him and make it stick.”

The medical community had already turned against lobotomy at the time.

Information about Dully’s research on his own lobotomy

A general program about the rise of lobotomy in the US