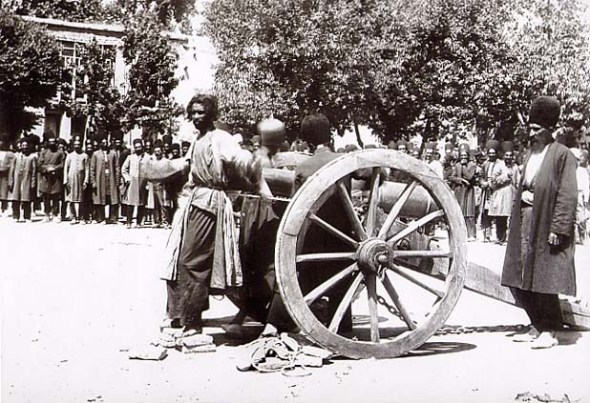 Death was also not always instantaneous. ( There had been instances when the artillerymen were injured by flying chunks of the executed, and in some cases, spectators too.)

After the explosion, the grouping of the men’s remains in front of each gun was various and frightful. One man’s head was perched upon his back, and he was staring round as if looking for his legs and arms. All you see at the time is a cloud like a dust storm composed of shreds of clothing, burning muscle, and frizzing fat with lumps of coagulated blood. Here and there a stomach or a liver came falling down in a stinking shower.

One wretched fellow slipped from the rope by which he was tied to the guns just before the explosion, and his arm was nearly set on fire. While hanging in his agony under the gun, a sergeant applied a pistol to his head ; and three times the cap snapped, the man each time wincing from the expected shot. At last a rifle was fired into the back of his head, and the blood poured out of the nose and mouth like water from a briskly handled pump.

This reminds me of the movie “Master and Commander.” Watch this scene. Are the firing mechanisms they are using on their cannons friction primer? Something about the action of firing a cannon in that manner just looks compeletely badass.