Photo from the Vestris Disaster shows crew and passengers trying to lower lifeboats from the port side; November 12, 1928 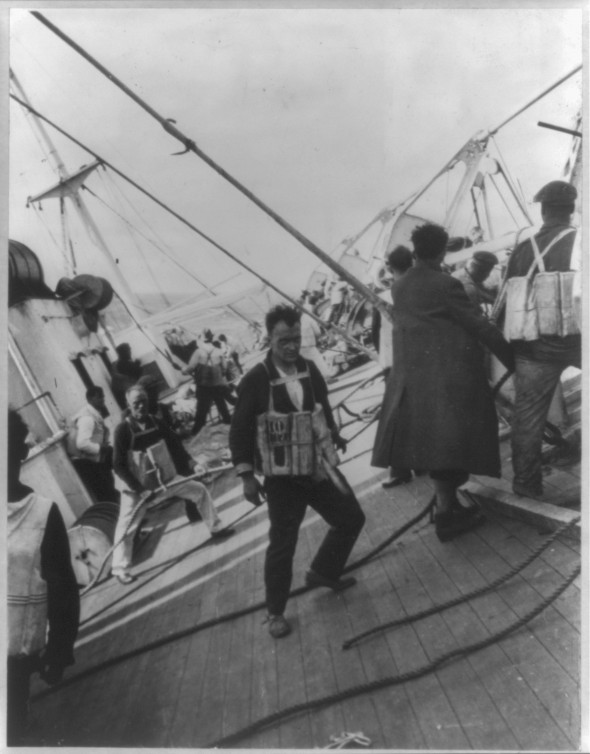 Vestris left New York bound for the River Plate on 10 November 1928 with 325 passengers and crew. A day after leaving New York, the ship ran into a severe storm and developed a starboard list. The following day, the list worsened as cargo and coal bunkers shifted and the ship took on water through numerous leaks.

Between 11 am and noon, while the ship was off Norfolk, Virginia, the order was given to man lifeboats and the ship was abandoned. Two hours later, at about 2pm, Vestris sank at Lat. 37° 38′ N, Long. 70° 23′ W.The rescue vessels arriving on the scene, late in the evening of 12 November and early in the morning of 13 November, were the steamships American Shipper, Myriam, Berlin and USS Wyoming.

While estimates of the dead vary from 110 to 127, Time and The New York Times reported that from the complement of 128 passengers and 198 crew on board, 111 people were killed:

None of the 13 children and only eight of the 33 women aboard the ship survived. The captain of Vestris, William J. Carey, went down with his ship. 22 bodies were recovered by rescue ships.

Press reports after the sinking were critical of the crew and management of Vestris. In the wake of the disaster, Lamport and Holt experienced a dramatic drop in bookings for the company’s other liners and their service to South America ceased at the end of 1929.

Many inquires and investigations were held into the sinking of Vestris. Criticism was made of:

Lawsuits were brought after the sinking on behalf of 600 claimants totaling $5,000,000.

Vestris ’​ sinking was covered by Associated Press reporter Lorena Hickok. Her story on the event became the first to appear in The New York Times under a woman’s byline.