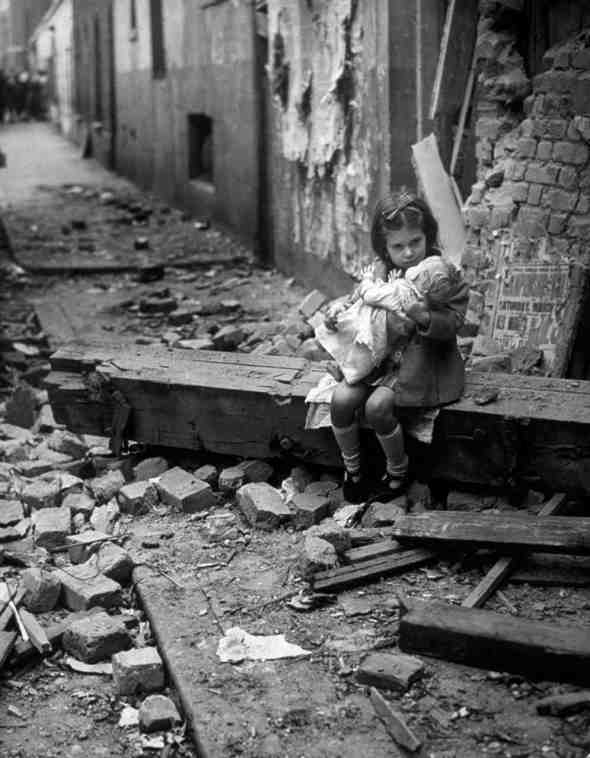 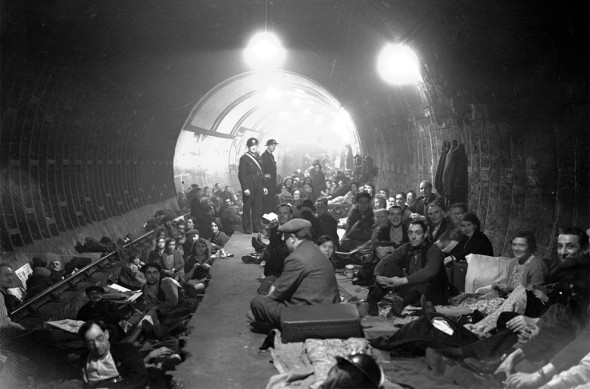 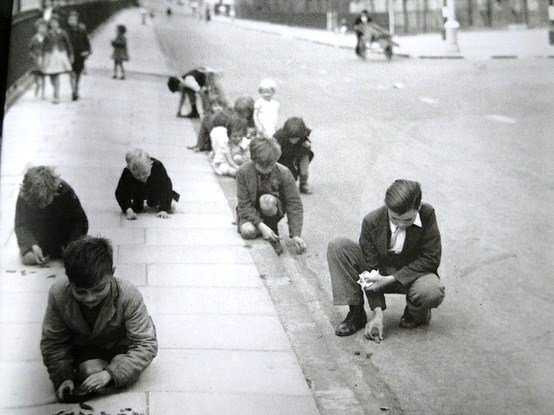 There’s actually an academic article written on this topic.

A woman bids farewell at Paddington Station in 1942 as her child is evacuated during the Blitz. 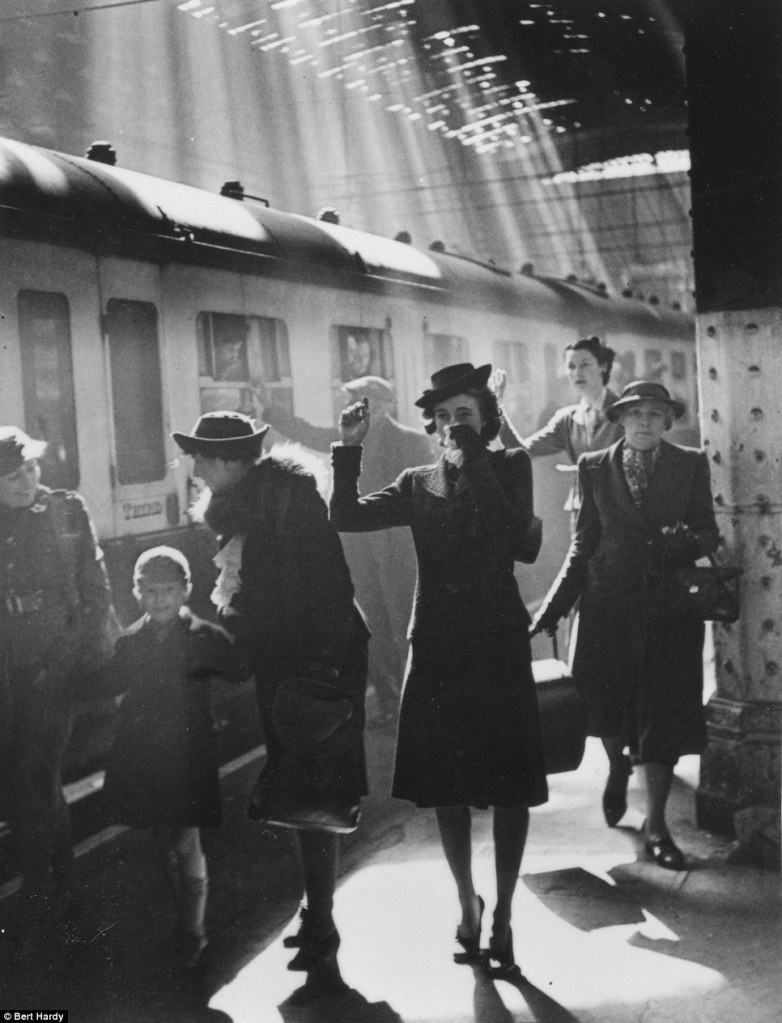 The fatal impact impression of Zeppelin commander Oberleutnant-zur-See Werner Peterson who chose to jump to his death rather than burn up with his ship, the L 32, 1916. 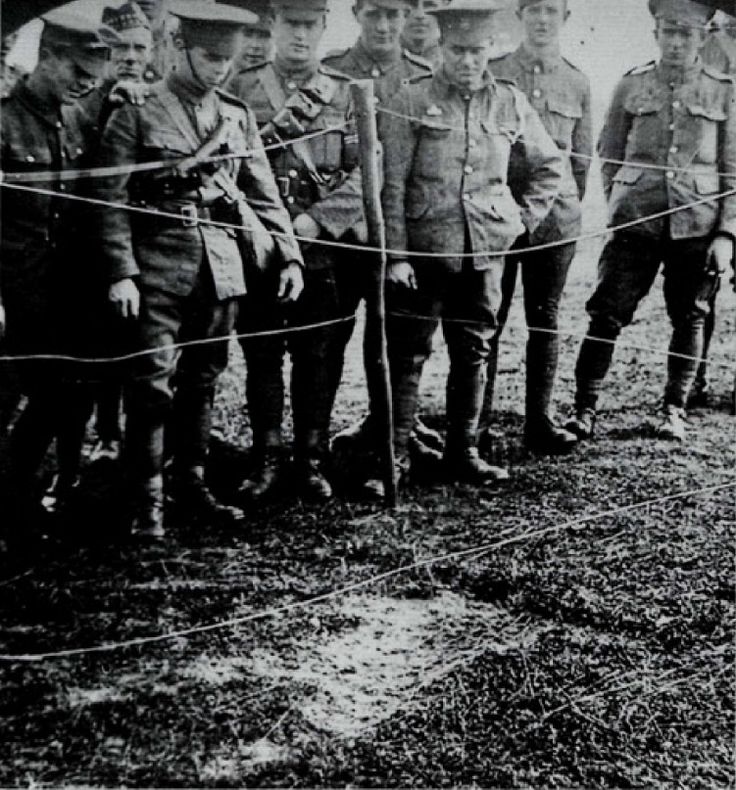 Operating altitude was around 13,000 feet. Presumably the Zeppelin would have started to descend as it caught fire. Terminal velocity is reached after just 1500-2000 feet of freefall so more than that wouldn’t have made the impact any bigger. Sooooo….. I guess that he jumped when he was around 8000 feet or so.

From the Wikipedia Article “Zeppelin“, under the category “History”:

L.31 approached London from the south, dropped a few bombs on Kenley and Mitcham and was picked up by a number of searchlights. Forty-one bombs were then dropped in rapid succession over Streatham, killing seven and wounding 27. More bombs were dropped on Brixton before crossing the river and dropping 10 bombs on Leyton, killing another eight people and injuring 30. L.31 then headed home. Also coming in from the south was L.32, running late due to engine problems, it dropped a few bombs on Sevenoaks and Swanley before crossing Purfleet at about 01:00. The Zeppelin then came under anti-aircraft fire as it dropped bombs on Aveley and South Ockendon. Shortly thereafter, at 01:10, a BE2c piloted by 2nd Lieutenant Frederick Sowrey engaged L.32. He fired three drums of incendiaries and succeeded in starting a blaze which quickly covered the entire airship. The Zeppelin crashed to earth at Snail’s Hall Farm, Great Burstead. The entire crew was killed, with some, including the commander Oberleutnant-zur-See Werner Peterson, choosing to jump rather than burn to death. 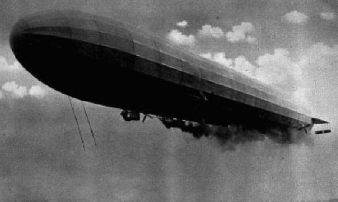 German Army and Navy hydrogen filled Airships began their bombing raids over Southern England with varied success on the 19th January 1915. Their bomb load consisted of both high explosive bombs and incendiaries. The incendiaries consisted of simple metal canisters filled with a mix of thermite, tar, and benzol; then being being wrapped in tarred rope and fitted with a simple fuse. 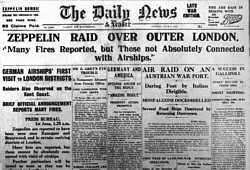 British aerial defences had up until 1916 proved ineffectual. In February 1916 the British Army took over full control of ground defences and a variety of sub 4-inch calibre guns were converted for anti-aircraft use. Searchlights manned by Police were also introduced, initially manned by police. By mid1916 there were 271 anti-aircraft guns and 258 searchlights across England.

Aerial defences against Zeppelins were haphazard, with the Royal Navy Air Service (RNAS) engaging enemy airships approaching the coast and the Royal Flying Corps (RFC) taking responsibility once the enemy had crossed the coastline. Due to the lack of an interrupter gear (to enable machine guns to fire forward) in early fighter aircraft the basic technique for downing Zeppelin airships was to simply drop bombs on them. Initial trials of incendiary bullets in mid-1915 had unfortunately shown unimpressive results. 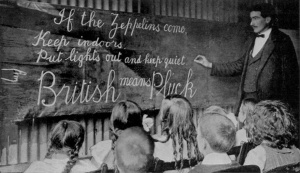 New BE12 fighters now fitted with interrupter gear and Lewis machine guns firing a mix of explosive, incendiary and tracer rounds were slowly introduced from mid 1916. But the German’s were also further developing their airships. Their new Q-class Zeppelin with an additional 100,000 cubic feet of gas enabled the length to be extended to 585 feet, improving both ceiling limits and bomb-load.

But the turning point came on  the night of the 2nd September 1916 when Lt. William Leefe Robinson, firing three drums of bullets from his Lewis gun, managed to set alight German Army Airship SL.11 commanded by Hauptmann Wilhelm Schramm. Built by Luftschiffbau Schütte-Lanz (and therefore not actually classed as a ‘Zeppelin’), it carried four Maybach engines developing an impressive 960 hp capable of propelling the airship at 91.8 kph. The airship, which quickly became enveloped in flames, crashed at Cuffley in Hertfordshire. Propaganda possibly intentionally misidentified the airship as one of the already feared “Zeppelins”. The crew (listed at the bottom of this page) were initially buried at Potters Bar Cemetery but in 1962 were re-interred at Cannock Chase German War Cemetery in Staffordshire.

For downing the first rigid airship on British soil and for the first ‘night fighter’ victory Robinson received the Victoria Cross. Robinson, his health being badly affected during his time as a Prisoner of War in 1917-18, succumbed to Spanish Influenza during the Pandemic and died on the 31st December 1918.

The loss of SL.11 ended the German Army’s interest in Airship warfare over England but the German Navy continued to aggressively pursue this form of aerial combat. On the night of the 23rd September three M-class airships, including L.32, attacked London. L32 was the second of the 650ft M-class “Super Zeppelins”, being powered by six engines and capable of operating at 13,000 ft (with another 5,000 ft to its maximum ceiling) while carrying up to four tons of bombs. 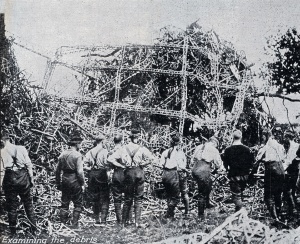 At 1.10am a BE2c fighter plane piloted by 2nd Lieutenent Frederick Sowrey attacked L.32. Despite fire being returned he fired three drums of explosive bullets until a fire finally took hold, possibly helped by a burning petrol tank. Flames swiftly spread throughout the airship, bursting through the outer envelope in several places. An eye-witness recalled that “The flames crept along the back of the Zeppelin, which appeared to light up in sections… until it was burning from end to end.” The great airship finally crashed to the ground near Great Burstead in Essex. Again, there were no survivors, the Commander, Oberleutnant-zur-See Werner Peterson, choosing to jump rather than burn to death in the inferno. Sowrey survived the war and died in 1968.

The same night L.33, despite being at 13,000 feet, was hit by anti-aircraft fire, thereafter being forced to the ground, landing near Little Wigborough. The crew set the Zeppelin alight but sufficient of the wreckage remained to be of valuable use to the British in their own rigid airship research.

There were a total of 23 Zeppelin raids in 1916 in which 125 tons of ordnance were dropped, killing 293 people and injuring 691. British anti-aircraft defences were becoming tougher but still new Zeppelins were introduced with an increased operating altitude of 16,500 feet and a maximum ceiling of 21,000 feet. Airships raids continued to be feared and to do great damage. It was only by 1918 that Zeppelin raids markedly decreased, primarily as a result of supply issues and the allied bombing of Zeppelin production lines and sheds in Germany.

The Zeppelin attacks had a profound psychological impact on the Allies. In total there were 159 Zeppelin attacks against England during World War I which resulted in the deaths of 557 people, mainly civilians. Under the Treaty of Versailles Germany was ordered to hand over all their airships, but as with their Navy, the crews attempted to destroy as many of them as they could.

The Zeppelin’s greatest achievements were undoubtedly to tie up numerous squadrons in home defence and for their psychological value but as an effective weapon of war they proved themselves unsatisfactory and were ultimately not a military success. Of the 115 Zeppelin Airships employed by the Germans, 53 were destroyed and a further 24 were too badly damaged to effectively carry out their missions. The Airship crews suffered a 40% loss rate. Additionally, the cost of constructing those 115 Zeppelins Airships was approximately five times the cost of the actual damage they inflicted.

The crew of both SL.11 and L.32 (listed below) are now buried at Cannock Chase German War Cemetery in Staffordshire, England. 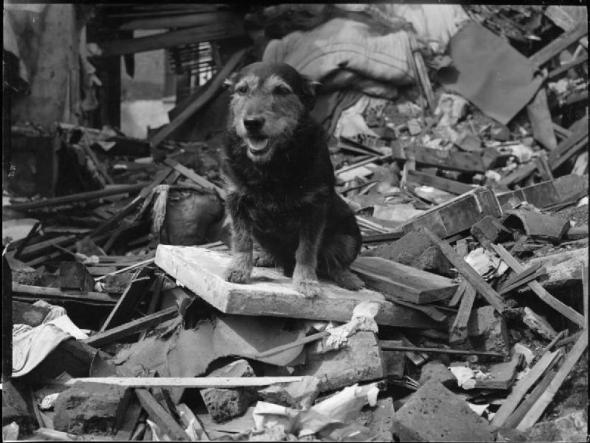 I like doggies, I wish I could hug them all.