The Zeppelin airship “Graf Zeppelin” flying over the Reichstag building in Berlin; October 1928

In 1928 the LZ 127 Graf Zeppelin became the first commercial passenger transatlantic flight service in the world.

LZ 127 Graf Zeppelin (Deutsches Luftschiff Zeppelin #127; Registration: D-LZ 127) was a German-built and -operated, passenger-carrying, hydrogen-filled, rigid airship which operated commercially from 1928 to 1937. It was named after the German pioneer of airships, Graf Ferdinand von Zeppelin, who was a Count in the German nobility.

The ‘Graf Zeppelin’ is considered the finest airship ever built. It flew more miles than any airship had done to that time or would in the future. Its first flight was on September 18, 1928. In August 1929, it circled the globe. Its flight began with a trip from Friedrichshaften, Germany, to Lakehurst, New Jersey, allowing William Randolph Hearst, who had financed the trip in exchange for exclusive rights to the story, to claim that the voyage began from American soil.

Piloted by Eckener, the craft stopped only at Tokyo, Japan, Los Angeles, California, and Lakehurst. The trip took 12 days—less time than the ocean trip from Tokyo to San Francisco.

During the 10 years the Graf Zeppelin flew, it made 590 flights including 144 ocean crossings. It flew more than one million miles (1,609,344 kilometers), visited the United States, the Arctic, the Middle East, and South America, and carried 13,110 passengers.

END_OF_DOCUMENT_TOKEN_TO_BE_REPLACED

B-17G ‘Wee Willie’ shot down in a sortie over a marshalling yard in Stendal, Germany. Of the crew of 9 only the pilot survived; ca. April 8th, 1945 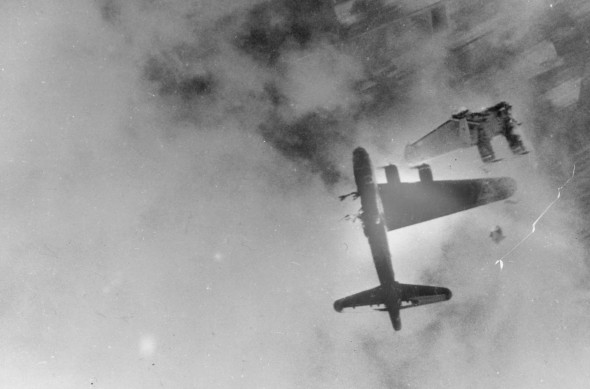 “We were flying over the target at 20,500 feet [6,248 meters] altitude when I observed aircraft B-17G, 42-31333 to receive a direct flak hit approximately between the bomb bay and #2 engine. The aircraft immediately started into a vertical dive. The fuselage was on fire and when it had dropped approximately 5,000 feet [1,524 meters] the left wing fell off. It continued down and when the fuselage was about 3,000 feet [914.4 meters] from the ground it exploded and then exploded again when it hit the ground. I saw no crew member leave the aircraft or parachutes open.”

The pilot managed to escape and spend the rest of the war as POW.

The wreck of the 1908 Wright Flyer that seriously injured Orville Wright and killed Lt. Thomas E. Selfridge, the first person to die as the result of an airplane accident; September 17th, 1908

During flight trials to win a contract from the U.S. Army Signal Corps, pilot Orville Wright and passenger Lt. Thomas Selfridge crash in a Wright Flyer at Fort Myer, Virginia. Wright is injured, and Selfridge becomes the first passenger to die in an airplane accident.

After Wilbur and Orville Wright made their historic first-ever airplane flight Dec. 17, 1903, they spent the next few years largely in seclusion developing their new invention. By the end of 1905 their interest in aviation had changed from curiosity and the challenge of flying, to the business of how to turn aviation into an industry: They were looking for a business model.

Unfortunately their first attempts to attract the United States government to the idea of using airplanes were turned down. The military just didn’t see how the airplane could be used in any practical way.

For two-and-a-half years the Wright brothers did not fly. They continued to work on their airplane, but put more and more time into building the business. Eventually they were able to attract interest from both the French and British governments, but by 1907 they still did not have any firm contracts.

But the Wright brothers were awarded two contracts in 1908: one from the U.S. Army and the other from a French business. The Army contract was for a bid to fly a two-man “heavier-than-air” flying machine that would have to complete a series of trials over a measured course. In addition to the $25,000 (about $600,000 in today’s buying power) bid, the brothers would receive a $2,500 bonus for every mile per hour of speed faster than 40 mph. No supersonic stealth fighters just yet.

Because they had not flown since October 1905, the brothers returned to Kitty Hawk to test their new controls to be used on the Wright Flyer in the Army flight trials. Despite some difficulty getting used to the new controls, both brothers managed to get some practice flying in during the stay in North Carolina.

Wilbur was in France during the summer of 1908 demonstrating the new Wright Flyer to Europeans (video). Orville remained in the United States and on Sept. 3 made his first flight at Fort Myer, where the Army trials were set to begin.

The flight tests set out by the Army required the airplane to carry two people for a set duration, distance and speed. There was a committee of five officers to evaluate the Wright Flyer’s performance, including the 26-year-old Selfridge.

Selfridge was a member of the Aerial Experiment Association and had designed the group’s first powered airplane. The Red Wing first flew on March 12, 1908, but crashed and was destroyed on its second flight a few days later.

During the first two weeks of September Orville made 15 flights at Fort Myer. He set three world records Sept. 9, including a 62-minute flight and the first public passenger flight. By Sept. 12 Orville had flown more than 74 minutes in a single flight and carried Maj. George Squier for more than 9 minutes in one flight.

On Sept. 17 Orville was flying Selfridge on another of the test flights. Three or four minutes into the flight, a blade on one of the two wooden propellers split and caused the engine to shake violently. Orville shut down the engine but was unable to control the airplane.

The propeller had hit a bracing wire and pulled a rear rudder from the vertical position to a horizontal position. This caused the airplane to pitch nose-down, and it could not be countered by the pilot.

Despite the crash, and the first passenger death in an airplane, the Army was significantly impressed with the Wright Flyer and allowed the brothers to complete the trials the following year. They were awarded the contract. Along with success in France, the Wright brothers were well on their way to establishing what would become one of the most successful aviation companies during the early days of flying.

Because of the crash, the first Army pilots were required to wear helmets similar to early football helmets in order to minimize the chance of a head injury like the one that killed Selfridge.

Though the early days of aviation continued to be full of danger, airplane travel today is statistically one of the safest modes of transportation based on passenger miles traveled. Between 1995 and 2000 there were about 3 deaths per 10 billion passenger miles flown. 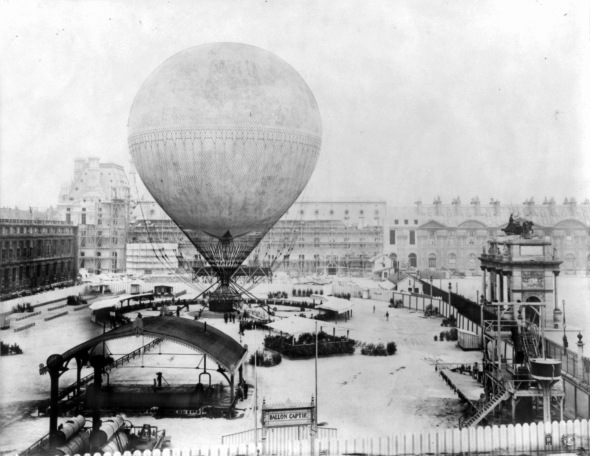 The moment before a MIG-29 exploded, after it crashed to the ground at the Paris Air Show – (the pilot can be seen ejecting before impact); June 8, 1989

Anatoly Kvochur was flying a single-seater Mikoyan MiG-29 Fulcrum ‘Blue 303’, the latest fighter aircraft of the Soviet Union at the time. While executing a low-speed, high-angle attack portion of his routine, a bird was sucked into the turbofan of his right engine (a bird strike), causing the engine to burst into flames. Kvochur immediately turned the remaining engine to full afterburner. However his speed, at 180 kilometres per hour (110 mph), was too slow to maintain stability on one engine. Despite his efforts, the stricken aircraft went into a steep dive. Kvochur managed to steer the MiG away from the crowd and eject 2.5 seconds before impact. He landed 30 metres (98 ft) away from the fireball of the crashed plane. (Wikipedia)

Winston Churchill’s one-man pressure chamber, used on his personal plane during WWII. It had ash trays, a telephone and an air-circulation system.

Winston Churchill was susceptible to pneumonia and the long cold flights weren’t good for his health (none of Churchill’s planes were pressurized). He would wear an oxygen mask on some occasions (even when he slept). Sometime in 1942 they did build a pressure chamber for him, but they couldn’t get it into his plane without dissembling the tail section. The contraption was rejected out of hand – thus never used.

Forgotten war. And forgotten it seems, that the main foe were Chinese soldiers.

There is a great documentary called “Chosin”. It’s on Netflix and has a lot of interviews with survivors that are unbelievable.

One that has stuck with me was the man who was wounded, then the truck carrying him to an aid station was captured by the Chinese/North Koreans. They set the truck on fire to kill the wounded, but this guy managed to get out only to be shot in the head. He survived that, crawled down a trench only to be discovered by a chinese patrol who tried to beat him to death with their rifles. Survived that too and almost died of hypothermia before finally being discovered by a American patrol. It really gives you a sense of how horrendous that campaign really was…

The original concept was intended to bomb Germany from bases in North America because the US thought that Britain would fall to the Nazis. (Source)

A Convair B-36H sitting next to a B-29 Superfortress, for scale: 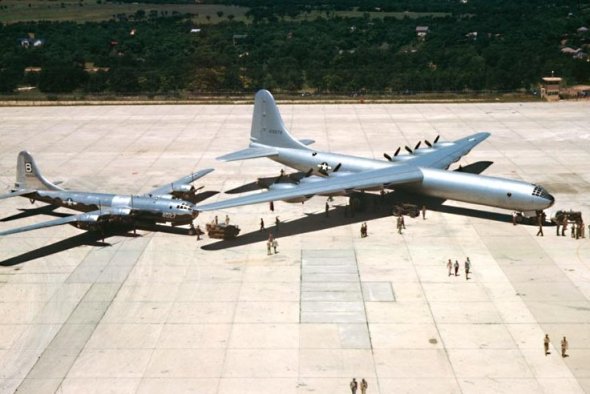 Otto Lilienthal, pioneer of aviation, died in 1896 of injuries sustained when his glider stalled and he was unable to regain control; falling from about 15 m (50 ft) – fractured his neck.

“Since the days of Copernicus, man has dreamed of flight…”