Hillary Clinton as a High School senior on her debate team in Park Ridge, Illinois; ca. 1965

Prisoner identification photograph of U.S. Army POW Staff Sgt. Joseph R. Beyrle taken in Stalag XII-A. Beyrle is thought to be the only American soldier to have served with both the U.S. Army and Soviet Army during World War II; ca. 1944

On 6 June 1944, D-Day, the Douglas C-47 Skytrain transport aircraft Beyrle was in came under enemy fire over the Normandy coast, and he was forced to jump from the exceedingly low altitude of 120 meters. After landing in Saint-Côme-du-Mont, he lost contact with his fellow paratroopers, but succeeded in blowing up a power station before being apprehended by the Germans a few days later. Over the next seven months, Beyrle was held in seven different German POW camps. He escaped twice, only to be recaptured each time. Beyrle was taken to the Stalag III-C POW camp in Alt Drewitz bei Küstrin in Neumark, state of Brandenburg (now Drzewice, Lubusz Voivodeship, Poland), about 50 mi (80 km) east of Berlin where he escaped in early January 1945. Knowing the Soviets were advancing much quicker from the east than the Americans, British and others were from the west, Beyrle headed eastward. Encountering the Soviet 1st Guards Tank Army in the middle of January, he raised his hands, holding a pack of Lucky Strike cigarettes, and shouted in Russian, “Amerikansky tovarishch!” (“American comrade!”). Beyrle was eventually able to persuade the battalion’s commander, who, incidentally, was the legendary Alexandra Samusenko, possibly the only Soviet female tank officer with the rank of Guards Captain, to allow him to fight alongside the unit on its way to Berlin. Thus, Beyrle began his month-long stint in a Soviet tank battalion, where his demolitions expertise was appreciated. Beyrle’s new battalion was the one that freed one of his former camps, Stalag III-C, at the end of January. But, in the first week of February, he was wounded during an attack by German Luftwaffe Stuka (Junkers Ju 87) dive bombers. He was evacuated to a Soviet hospital in Landsberg an der Warthe (now Gorzów Wielkopolski, in Poland), where he received a visit from Soviet Marshal Georgy Zhukov, who, intrigued by the only non-Soviet in the hospital, learned his story through an interpreter, and provided Beyrle with official papers in order to rejoin the American forces. Joining a Soviet military convoy, Beyrle arrived at the U.S. embassy in Moscow in February 1945, only to learn that he had been reported by the U.S. War Department as killed in action on 10 June 1944 on French soil. A funeral mass had been held in his honor in his hometown of Muskegon, Michigan and his obituary was published in the local newspaper. Sgt. Beyrle returned home to Michigan on 21 April 1945. He would marry in 1946, coincidentally, in the same church and by the same priest who held his funeral mass two years earlier. Beyrle died in 2004 at the age of 81. His son John Beyrle would serve as the United States Ambassador to Russia from 2008 to 2012.

“Yossarian was a lead bombardier who had been demoted because he no longer gave a damn whether he missed or not. He had decided to live forever or die in the attempt, and his only mission each time he went up was to come down alive.”

Right before the execution of Anna Månsdotter, the last woman executed in Sweden; ca. 1890 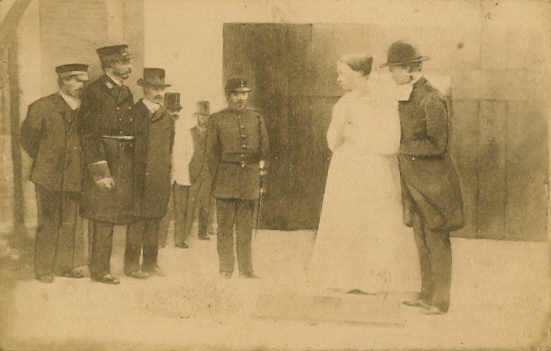 The Yngsjö murder occurred on 28 March 1889 in Yngsjö, Sweden. Hanna Johansdotter (born 1867) was murdered by her husband Per Nilsson and his mother Anna Månsdotter (born 28 December 1841), who became known as Yngsjömörderskan (in English: The Yngsjö Murderess). Both were sentenced to death for the murder, and Månsdotter became the last woman in Sweden to be executed.

The circumstances of the murder are not entirely clear, as both Månsdotter and her son gave several different explanations for it. In later years it has been suggested that she carried out the murder alone. During the trial it came to light that she had a sexual relationship with her son, and that this eventually led to the murder. It is believed, that she murdered her daughter-in-law because of jealousy, and that she did this with her son’s consent.

Anna Månsdotter had married Nils Nilsson, 13 years her elder, expecting a wealthy future, but they had become poor and afflicted with debts. She had three children, of which only one, her son Per, lived to adulthood. Anna’s spouse Nils died in 1883. She had arranged the marriage between Per and Hanna Johansdotter, possibly as a way to prevent the spread of rumours about incest. The marriage was not a happy one. Anna did not move in with her own mother, which had been the initial plan, and Hanna complained to her father that her mother-in-law was the cause of her unhappy marriage. One suggestion is that Hanna had discovered the sexual relationship between her husband and his mother, and that they together murdered her to prevent her from being able to tell anyone. One of many summaries given of the murder was that they beat her with a piece of wood, after which Anna strangled her. They then dressed her and placed her as if she had fallen down the stairs.

Månsdotter was executed on the district jail grounds in Kristianstad on 7 August 1890 by executioner Albert Gustaf Dahlman. Per Nilsson was pardoned from his death sentence and was instead sentenced to hard labour for the rest of his life. He was however released in 1913 and died of tuberculosis in 1918.

Here is a filmed reenactment from an old movie:

circus elephant from a Belgian zoo is put to work on a Belgian farm during World War I. Horses and mules were drafted to aid in the war effort, which left a shortage for farmers in Europe; ca. 1915