At the 50th anniversary of the battle of Gettysburg, Union and Confederate veterans shake hands; ca. 1913 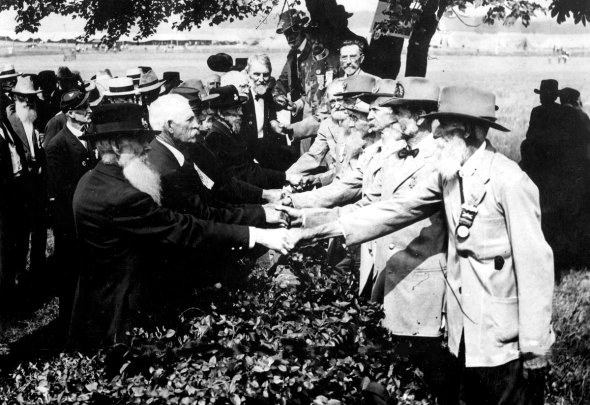 The 1913 Gettysburg reunion was a Gettysburg Battlefield encampment of American Civil War veterans for the Battle of Gettysburg’s 50th anniversary. The June 29–July 4 gathering of 53,407 veterans (~8,750 Confederate) was the largest ever Civil War veteran reunion, and “never before in the world’s history [had] so great a number of men so advanced in years been assembled under field conditions” (Chief Surgeon). All honorably discharged veterans in the Grand Army of the Republic and the United Confederate Veterans were invited, and veterans from 46 of the 48 states attended (cf. Nevada).Despite concerns “that there might be unpleasant differences, at least, between the blue and gray” (as after England’s War of the Roses and the French Revolution), the peaceful reunion was repeatedly marked by events of Union–Confederate camaraderie.

President Woodrow Wilson’s July 4 reunion address summarized the spirit: “We have found one another again as brothers and comrades in arms, enemies no longer, generous friends rather, our battles long past, the quarrel forgotten—except that we shall not forget the splendid valor.”