A patient in a restraint chair at the West Riding Lunatic Asylum, Wakefield, Yorkshire; ca. 1869

An American soldier demonstrates an M3 ‘Grease Gun’ that can shoot around corners; ca. 1953 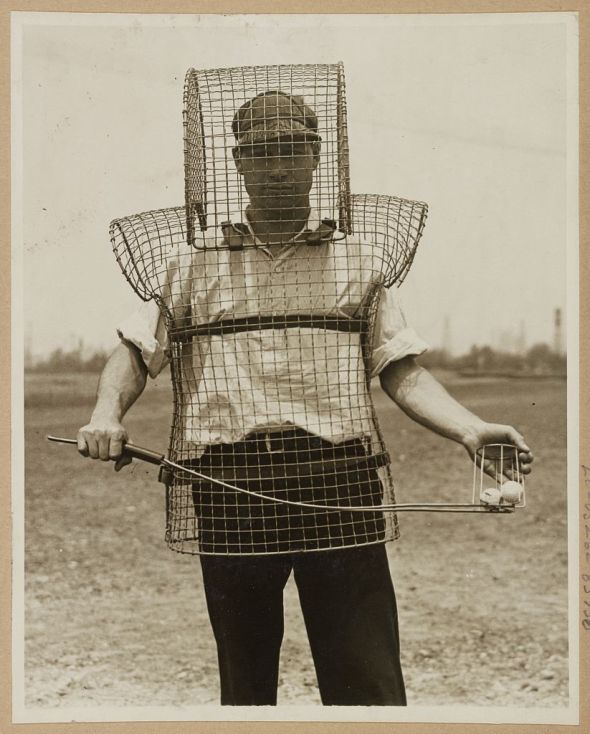 How the Russians conquered Siberia:

Prior to the Mongol invasions, the Novgorodians had penetrated past the Urals. The Russians used northern routes to enter Siberia by land and sea, and by the mid-sixteenth century they had reached the mouth of the Enisei.

In the sixteenth century, the Stroganov family developed large-scale industries, including salt and fur extraction, in North-Eastern European Russia the Ustiug area (a bit right of the red area in this photo):

After the conquest of Kazan (see here), the Stroganovs obtained large holdings in the upper Kama region, where they maintained garrisons and encouraged colonists to settle. In 1582, the Stroganovs sent an expedition against the Siberian Khanate, consisting of around 1500 cossacks and some volunteers, and lead by a Cossack, Ermak. The Russians were massively outnumbered, but made good use of organisation, firearms and that famous Russian bravery to overcome the Khanate, and they ultimately seized the headquarters of the Siberian Khan. Ivan the Terrible realised the prospects of this, as Siberia was well known for the opportunities for fur trading, and sent reinforcements. Ermak died in 1584 however (before reinforcements arrived), and although they actually had to conquer the Siberian Khanate again, they began to consolidate their holdings.

In order to subjugate the natives and collect tributes of fur (iasak), which the natives were expected to pay, a series of forts were built at the confluences of major rivers and streams and important portages. The first among these were Tyumen and Tobolsk — the former built in 1586 by Vasilii Sukin and Ivan Miasnoi, and the latter the following year by Danilo Chulkov. Tobolsk would become the nerve center of the conquest. Essentially, from here on out, the Russians began to subdue minor tribes and further expand these forts and outposts. Of these, Mangazeya was the most prominent, becoming a base for further exploration eastward. It was a highly profitable undertaking for the Muscovite state, due to the furs extraction.

Following the khan’s death and the dissolution of any organized Siberian resistance, the Russians advanced first towards Lake Baikal and then the Sea of Okhotsk and the Amur River. Between 1610 and 1640, the Russian military and the Cossacks moved three hundred miles further into the southern steppe, in continuous conflict with the Crimean Tartars and other nomads. However, when they first reached the Chinese border they encountered people that were equipped with artillery pieces and here they halted. The treaty of Nerchinsk (1689) outlined the borders between the two countries and lasted until 1858. A small band of Cossacks, lead by Ivan Moskvitianin, reached the Pacific Ocean in 1639. After the conquest of the Siberian Khanate (1598) the whole of northern Asia – an area much larger than the old khanate – became known as Siberia and by 1640 the eastern borders of Russia had expanded more than several million square kilometers. In a sense, the khanate lived on in the subsidiary title “Tsar of Siberia” which became part of the full imperial style of the Russian Autocrats.