Great Leap Forward: the biggest famine of all time?

The reason why the years during Great Leap Forward is considered to be a famine is because the events set off by said Great Leap led to a large number of deaths from starvation and overwork.

The Great Chinese Famine is linked to the Great Leap Forward for many reasons. There is no singular cause as to why it happened, as it was part of multiple events, including (in no particular order):

Honestly, there’s probably more reasons than that, but I’m doing my best to focus on the bigger ideas, because it’s just a jumbled mess of events.

The Great Leap Forward, as the manifestation of the General Line in action, wanted to industrialize as quickly as possible, with the intention of becoming a great communistic country that can surpass the production power of Western powers within 15 years. Mao envisioned that with enough dedication and enthusiasm (and with the right kind of thinking), the country could join communistic paradise within a few years. There were some leaders within the party who opposed what they saw as “rash advance”, as the country was putting large sums of money into industry with very little benefit, and tried to slow it down in early 1958, prior to the introduction of the Great Leap Forward. However, Mao was not happy about this and reverted it, and those who had opposed it later gave self-criticism and otherwise followed Mao’s line, praising Mao’s genius and otherwise agreeing with whatever he said. Speaking up and saying “this is a bad idea” was political suicide. Disagreeing with Mao was seen as a counterrevolutionary act; with that, people who spoke out against Mao’s ideas were seen as “white flags” and capitalistic elements that needed to be rooted out and replaced with “red flags”. When something went wrong, it was the fault of counterrevolutionaries who were trying to sabotage the Great Leap and socialism in an attempt to go back to bourgeoisie ways. People who did not agree with Mao completely could be and were often violently struggled against, and in many cases it turned deadly. Under this type of environment, people who spoke up and told the truth were labeled right deviationists and punished. There was no incentive to tell the truth, so there was more incentive to lie. Lying became the means of self-preservation and survival.

In addition, the different provinces were in competition with one another. Because of the emphasis on “greater and faster”, provinces did not want to be the ones left in the dust. And with people overexaggerating their accomplishments to absurd amounts (like claiming that they were able to plant 1765 kilos per mu in a satellite testing field in Hunan), people were encouraged to exaggerate and make up higher and higher figures, which led to higher production targets, which led to even higher figures regarding crop yields.

Unfortunately for the peasants, these higher figures were used to calculate how much the state would procure as their share of the crop. In many cases, the procurement quota was set so high that even after every single grain was taken away (leaving nothing for the peasants to eat), it wasn’t enough to satisfy the quota. New campaigns started up, to fight against “false reporting and private withholding”. People were being beaten and tortured in the belief that they were hiding grain away from the state. When this turned up nothing, cadres from every level lied about how much they were able to procure from class enemies, which in turn just exasperated the problem and made it oh so much more violent than it was.

The people’s communes made it so much worse. These communes were rather large, with the average commune consisting of over five thousand households. They were also really inefficient, since many communes were spread out over vast tracts of land. People were required to sign up for a commune, lest they were labelled as white flags and targed for struggle. Once in the commune, their property was seized without compensation, and manpower was sent out en masse to work on large industrial projects (to the point that there were not workers available to plant or harvest crops). Fields were left fallow, peasants were ordered to work on other projects (and depleting manpower from agricultural pursuits), comrades were highly unrealistic with their demands and ignored geography, and it was really inefficient (to the point that over 100 peasants were sent to work one mu of land in one case). In addition, the people in the commune had to eat in the communal kitchen, which had its own set of problems.

The communal kitchens were part of Mao’s dream of free food for everyone, something that was important in his dream of Communist Paradise. In Mao’s mind, this would free up more people to work on building a communistic society, as there would be less people having to spend time focusing on cooking food. They offered a large variety of food for free, and everyone in the commune was able to get food from there so long as they did their work. The problem is, these communal kitchens were highly inefficient and led to large amounts of waste. The inefficiency comes from multiple factors:

In addition, commune members were required to eat at the kitchens (or at least collect their rations from the kitchens), which may be a rather long distance from home. Some people had to travel 15 kilometers to reach the kitchen, spending a good part of the day just traveling to get food. If you didn’t work your share (or pissed off a cadre), you could be denied food, leading people to starve. Quality of the food was abysmal, leading to inedible vegetables and dung in the congee, and inevitably people began to get sick. Rations were controlled by the kitchen; even though households technically owned these rations, the kitchen had the actual grain, so people had to go eat at the kitchens. As such, when communal kitchens ran out of food and had to shut down, people were left starving.

When the famine began to take place, cadres did their best to cover it up. Peasants were barred from going places (to keep them from running away or telling people about what was happening), letters were seized to keep word from going out, deaths were under-reported using various means, people were forbidden from telling the truth under political pressure, etc. Word would not reach the Central Committee until millions of people had already perished. Even when people were sent out to figure out how bad the famine was, officials were terrified of telling the truth, lest they earn Mao’s ire and be punished for telling the truth. Eventually, something was done, and the Great Leap Forward was abandoned, but by then, millions of people were dead from starvation.

I should note that this is a very brief summary of the story behind the numbers. The issues behind it are more complicated than this, and while I did my best to summarize and give highlights, this is woefully incomplete and will inevitably gloss over other related problems.

“Lafayette, we are here.” US General John J. Pershing salutes the grave of the Marquis de Lafayette as he arrives in France during WWI.

The Marquis de Lafayette is an amazing and fascinating guy. Besides a hero of the American Revolution, he was also one of the few true “Good Guys” of the French Revolution. In France he fought both for representative democracy and preservation of stability and the monarchy. He was horrified by the chaos that that revolution became.

Fun Fact: Lafayette loved America so much he was buried with soil from Bunker Hill. 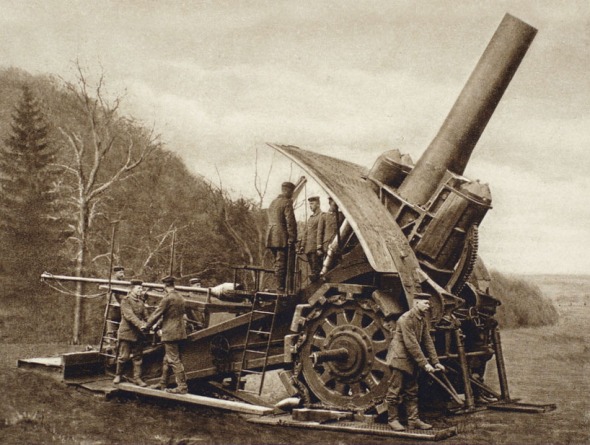