The Death of Grigori Rasputin.

Separating fact from fiction in the life of Grigori Rasputin is quite possibly an impossible task. The so-called Mad Monk was rumored to be a member of the Khlysts, a sect that themselves were subject to rumors about bizarre sexual practices, and despite probably not being true (less than reputable sources still like to claim it to be so), it certainly didn’t help his reputation. When it comes to his death, it reads just as fantastical as his life, and as the only first hand accounts are from those who plotted his death, much of it must be taken with a grain of salt, a story told by men who wished to describe just how inhuman their quarry was.

The close relationship he enjoyed with the Imperial Family of Russia along with his reputation causes all sorts of tongues to wag over the possibility he was sleeping with the Tzarina, and possibly her daughters as well. The apparent influence he held over the Tzarina earned him few friends, and an attempt on his life was made in 1914 presumably over these fears although the assassin was an insane peasant woman who couldn’t be connected to any palace intrigue. Despite the deep stab wound to his gut, Rasputin survived that one.

With the Tzar having left to oversea the military during World War I however, the Tzarina’s reliance on Rasputin became only more pronounced however, and in December of 1916 a new attempt on his life was made. Prince Felix Yusupov was married to the Tzar’s niece, and, along with other plotters including army officers and politicians, invited Rasputin to his family palace. Rasputin was given cyanide laced food and drink, which appeared to have no ill effects on him. Determined to kill the man, Yusupov fetched a revolver and shot him twice in the abdomen, which seemed only to enrage Rasputin, who attacked him, and then fled up a flight of stairs from the basement room he had been being entertained in, and out the door into the Russian winter. Shot twice more outside by Vladimir Purishkevich, a member of the Duma, Yusupov then hit him over the head to ensure he was down. The body was trussed, weighted, and dumped through a hole cut in the ice of a river. his body would be found a few days later, and although the rumors were that he was still alive when disposed of, there was little to suggest he had drowned to death, and the real cause of death was probably a bullet to the head during his escape attempt. 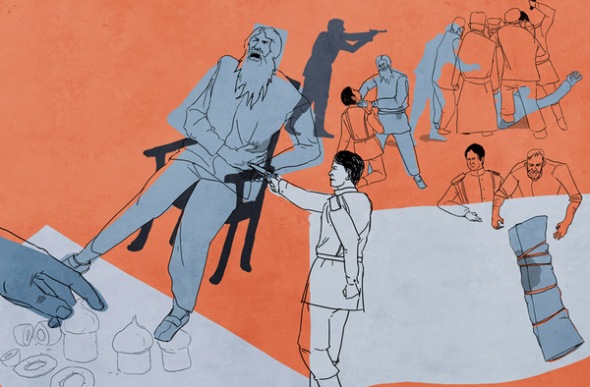 Whether or not he was poisoned has also been called into question. Prince Yusupov claimed he had, but it wasn’t found during the autopsy. As I said at the onset, only his killers know exactly how the murder was conducted, and it is clear that they wished to ensure that their actions were seen as the noble slaying of a monster who threatened the Romanov family, and what better way to do so than describe an inhuman fanatic who survived poison, shooting, and the cold, only to finally die by drowning under the ice.

In part though, don’t you think the tragedies of the past, combined with increased knowledge of ourselves, make that possible in the present?

Just some food for thought; Hitler’s first plan wasn’t to exterminate the Jews, he had simpler dreams to send them of somewhere, such as Madagascar. The final solution came in part from him not giving a shit to carry that out logistically and in part from American influence. The first portion of the American 20th century saw a huge rise in the eugenics movement, which basically gave “scientific” justification to castrate the dumb people as well as non-Aryan races. Many states had mandatory sterilizations of those deemed “unfit.” Here’s a synopsis of what I’m talking about. The next link is to a recent monograph discussing American influence in Nazi racial policy..

Well before our armies set foot in German territory, American businesses were inside interment camps, providing and maintaining filing software punch cards on the people “processed” by those locations.

All this to say, at the time, Germany didn’t have a monopoly on “evil.”

Even in today’s world, we play into viscous mechanisms, not necessarily of our choosing, but of the way the past has shaped us. For example, the computer I’m typing on right now, the cell phone I use, even the fabrics I clothe myself in, all come from slave labor. Sure, the people who make my goods might not be owned by someone, and they do make a wage ($45/month probably), but these people aren’t people the way you or I are. They have no time to let their mind wander, they have no time to create, they have no time to enjoy the fruits created by past generations. They simply work, always obeying a master. I realize my purchase fuels this. I understand that my heaven is someone else’s hell, yet I continue to because my culture promotes and even mandates such behavior. It’d be ludicrous for me to try to be a part of society if I didn’t have a cell phone, or a computer for that matter. I need this stuff.

To end on a positive though, despite our nation’s history of slavery and racism, we’ve managed to elect a Black president. Europe is far more unified with itself. Japan isn’t raping China… Human’s really seem to be going somewhere. My overall point though, is that sometimes we fall into patterns of thinking that we’re already at some benevolent level of being where the world is in harmony and people are “civilized.” In truth, we’re barely getting there. The more we’re familiar with struggles of the past, the clearer our understanding of the present becomes. What I see is that all people want to be good and contribute, however the “unbalanced” ways of the past shape our understandings of good which might throw us of course, when we feel we’re going in the right direction.