Behavioral psychologist B.F. Skinner working with a rat in a “Skinner box”; ca. 1960

Skinner was one of the founding fathers of behavioral psychology. He felt strongly that all human behavior could be broken down I a fundamental electro-chemical interaction. This was groundbreaking in psychology for a number of reasons: 1- it gave rise to “scientifically respectable” psychological research, 2- it crossed some philosophical boundaries into concepts of free will, 3- it laid foundation for cognitive behavioral therapy, by making the correlation between conditioned behavioral response and positive/negative reinforcement. (He wasn’t the only one, Pavlov being the other of note, but he was one who gained recognition.)
His theories have come to be known as “incomplete,” as we discovered there are other measurable elements that predict behavior, but his steadfast belief in his ideas, and his committed research brought on a whole new wave of psychological ideology.

The Russians teaching the German prisoners of war the cossack dance. The Eastern front, Russia; ca.1915 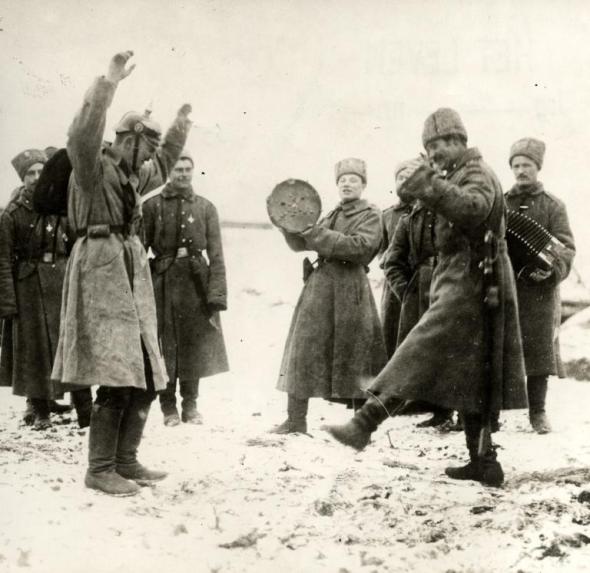 François-Noël Babeuf was born in 1760, in Saint-Quentin, to a desperately poor family. He was born in filth, in his own words. He was given an education by his father, and had a hell of a mind. His intelligence, thirst for knowledge, and independent thinking complemented the short and informal education he received, and paved the the way for his future. He began working, digging a canal, at the age of twelve. A few years later, he worked for a notary specializing in feudal law. His job was to help the aristocracy claim as much as possible of their ancient privileges. Around the same time, he married Marie-Anne Langlet.

In 1789 he participated in drawing up the official complaints for his area to submit to the Estates General, but without much success. When the revolution broke out in 1789, Babeuf wrote a letter to his wife

How ill that joy made me! I was at the same time alike satisfied and ill content. I said, so much the better and so much the worse! I understand that the people should do justice for itself; I approve of that justice so long as the destruction of the guilty suffices for it, but has it not to-day become cruel? Punishments of all kinds – quartering, torture, the wheel, the stake, the whip, the gibbet, executions everywhere – have demoralised us! Our masters, instead of policing us, have made us barbarians, because they are such themselves. They reap, and will continue to reap, what they lave sown. For all this, O my poor wife! will have, as far as one can see, terrible consequences! We are as yet only at the beginning!

Despite his reaction, Babeuf threw himself into the revolution wholeheartedly. He changed his name to Camille, the French form of Camillus, after the neoclassical fashion of the time. He changed the name of his son, too, from Robert to Émile, in honor of Rousseau’s book. In 1790, he was imprisoned for his writings, which were judged to incite rebellion against the government. He wasn’t held long, and soon continued his activism. In October 1790, he started his own newspaper. He argued for the actual abolition of fiefdom, where feudal property was declared invalid, instead of the process started in 1789 to phase it out by allowing communities to buy themselves free.

Who wants to hold onto equality if it is in name only? Equality can’t be the name of a meaningless transaction. It has to show itself by immense, and positive results, by effects that are easily seen, and not by imaginary abstractions.

He was arrested against in 1791, but the outcry from the community was powerful enough that he was released within days. He spent the next few years writing, holding minor administrative positions, and going in and out of prison.

His attitude to violence remained. He opposed the Terror, and welcomed the end of its leaders, for whom he coined the word “terroriste”.

In 1794, he started a new paper, called Journal of Press Freedom, and later the Tribune of the People. At the same time, he took that name Gracchus. After the end of the Terror, tolerance for political radicalism was even lower than it had been before, and Babeuf was arrested the same year. In prison, he formed new connections, with people like Augustin Darthé, Sylvain Maréchal, and Filippo Buonarroti.

With them, he began a new part of his life, politically. These new friends and allies were admirers of Robespierre and the rest of the fallen left of the recent past. Babeuf came to see things from their point of view, and attempted to rehabilitate Robespierre and his fellow “terrorists”. After the Jacobin club had been forcibly closed, Babeuf and Co. created its successor, the Panthéon Club. They were quickly driven underground. This became the start of the Conspiracy of Equals, a clandestine movement to start a new revolution. Their goals were two-pronged, on the one hand, which was the side they showed in public, they wanted to return to the constitution of 1793, which had held the beginning of a welfare state, universal suffrage, and other democratic gains which the constitution of 1795 had undone. For those who had been let into the inner circle, they wanted to abolish the current system of government entirely, and to end private property. The second side to the movement was infinitely more threatening to the authorities, but even the “public” goals could get them all sentenced to death.

They gathered support through their writings, songs, and wall newspapers. The continuing setbacks for both democracy and equality swelled the ranks of Babeuf’s supporters, as did the threat from the growing royalist opposition.

In 1796, a police spy who had infiltrated the ranks of the Equals denounced them. Many members of the group were arrested, Babeuf, Buonarroti, Darthé and Maréchal among them. The next year, they were put on trial for conspiring to overthrow the government.

The trial was held in Vendôme, as the Parisian population was seen as too much of a risk. In the end, Babeuf and Darthé were sentenced to death. They were executed the next day.

Babeuf’s ideas to abolish private property and the current state were neither new nor unique, which he himself proved during his trial, but his attempt to put them into practice was unique. The Babouvist movement became the first seeds of what would later develop into socialism, communism and anarchism.

“Babeuf, the communist Babeuf, your teacher and mine,” said Jean Jaurès, “founded in our country not only socialist doctrine, but above all socialist politics”. The manifesto of the Comintern, written by Leon Trotsky, declared that

“We Communists, united in the Third International, consider ourselves the direct continuators of the heroic endeavors and martyrdom of a long line of revolutionary generations from Babeuf – to Karl Liebknecht and Rosa Luxemburg.”

Today, Babeuf has disappeared from public consciousness, and having been mentioned a century ago by the new faces of communism and socialism, with a name drop in the Communist Manifesto, might be his biggest claim to fame.

Collection of texts by and about Babeuf and the Babouvists, on marxists.org

I don’t know what the hell this is, but I found it while searching youtube for the video above