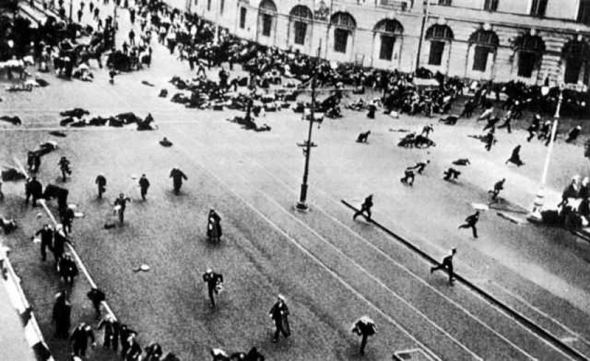 July Days – clashes between Russian Provisional Government and Bolsheviks. The military attacked the peaceful demonstration and engaged in repression against the Bolsheviks. Lenin went into hiding, while other leaders were arrested. The outcome of the July Days represented a temporary decline in the growth of Bolshevik power and influence in the period before the October Revolution. 716 killed or wounded from demonstrators side, 94 killed or wounded from Government side.

This entry was posted on May 28, 2014 by Miep. It was filed under History, Images of History, The Drama Of It All, The Politics of Cultural Destruction, Weird, World War One and was tagged with black and white photography, Bolsheviks, Europe, Fight, Government, History, July Days, Military, October Revolution, peaceful demonstration, Petrograd, Photo, Photography, Politics, Power, Russia, Russian Provisional Government and Bolsheviks, Russians, Society, Soviet Union, USSR, Weird, World War One, WW1.