The Gleiwitz incident: the ‘first man to die’ in the War

In August 1939 Hitler was stirring up tension with Poland and he was prepared to fabricate whatever was needed as a pretext to invade. On August 11th he told the League of Nations High Commissioner

“If there’s the slightest provocation, I shall shatter Poland without warning into so many pieces that there will be nothing left to pick up.”

On August 22nd Hitler spoke to his military commanders

“I will give propagandistic cause for the release of the war, whether convincing or not. The winner is not asked later whether he said the truth or not.”

In fact preparations for Operation Tannenburg had begun on August 8th when SS-Gruppenfuhrer Reinhard Heydrich told his men that war with Poland was ‘inevitable’.

The idea for fake “border incidents”, in which Germany would apparently be the victim of attacks by Poles probably came from Heydrich himself. It was he who was ordered to stage them, assisted by SS-Oberfuhrer Muller, head of the Gestapo.

They started by scouting the Silesian border between Germany and Poland and soon found suitable locations near the town of Gleiwitz. What they wanted were relatively isolated outposts of the German government that could be attacked by ‘Polish aggressors’. The attacks would be on a forestry station, a customs house and a radio station, where the ‘Poles’ would take over a German radio broadcast and make nationalistic statements in Polish. This would have a dramatic impact on ordinary Germans listening to their radios at home.

A plan was rapidly put together where SS troops dressed as Polish ‘rogues’ accompanied by units from the Polish army would ‘attack’ other SS troops dressed as German border guards. A refinement that was introduced during the planning was that some of the ‘Poles’ would be killed in the attack, so that their bodies could be presented to the worlds’ press as “evidence”. The victims were to be concentration camp inmates dressed as Poles, known as “canned goods”.

If the context and implications were not so serious the whole ‘pretend’ episode could be seen as a complete farce, especially as the Nazi’s had to go to extreme lengths to maintain the secrecy of the operation yet were simultaneously giving the nod to various individuals to keep ‘out of the way’. It was arranged that the regular Wehrmacht would keep clear of specific border areas so that they would not get mixed up in actually responding to ‘Polish aggression’.

The descent into farce came closer when on August 23rd, almost as soon as the ink was dry on the Nazi-Soviet Non aggression pact, Hitler ordered the invasion of Poland to start at 4.30 am on 26th August. The first of three successive code words for Operation Tannenburg to commence on August 25th was sent. When the second code word was sent on the evening of 25th two of the ‘attacking’ units became confused and started to cross the border without waiting for the final third code word. Yet Hitler had had a change of mind, rescinding his order to invade because of British guarantees to Poland and a lack of support from Mussolini. Operation Tannenburg was now halted as well. German motor cyclists were sent out to deliver desperate messages to the ‘Polish’ forces telling them to stop.

This led to a revision of the overall plan. Now the takeover of the Radio station by ‘Polish rebels’ became more important. To give it added credibility it was decided that a real ‘Polish rebel’ was needed, so that he could be killed while ‘attacking’ the German radio station. 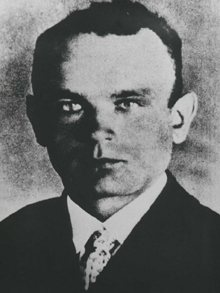 The unfortunate Franz Honiok was selected from police files as being a well known local Polish sympathizer who had fought with the Poles during the 1921 rebellion by Silesian Polish nationalists, even though he was a German national. The 41 year old farmer and agricultural equipment salesman was picked up by the Gestapo on 30th August and held incommunicado.

Hitler decided to go ahead with the invasion on 30th August with the commencement of ‘Fall Weiss’ set for 5.45am on 1st September. Operation Tannenberg was back on. The attack on the Gleiwitz Radio staton went ahead on the evening of the 31st.

At around 8pm the ‘rebels’ managed to break into the unlocked compound and beat up the three radio station employees, all German nationals. Then their problems began. First they could not find a microphone. Further assaults on the radio station employees led to the discovery that it was not a radio station at all, merely a radio transmitter relay station for Radio Breslau, located many kilometers away. In desperation the ‘rebels’ found an emergency channel used for sending out local flood warnings and used this to send out their message of ‘Polish aggression’. How many people heard it, if any, is not known. However hundreds of thousands of Germans sitting at home listening to light music on the radio did not have their evenings interrupted by insurrectionist messages in Polish, as originally planned.

Meanwhile Franz Honiok, who had earlier been drugged into semi-consciousness, was dragged out, placed near the entrance to the radio station and shot in the back of the head. Later that evening the local police were called in to take photographs of the body, which they were forced to hand over to the Gestapo. When these were viewed in Berlin it was decided that they were not good enough – so the Gestapo went back and took pictures of the body in a different position – mysteriously by this stage a second body had been added. Eventually it was decided that even these could not be used for propaganda purposes. What happened to the bodies has never been established.

Later that evening the attacks went ahead on the Pitschen Forestry Station, where a bucket of ox blood was spread around, and at the Hochlinden Customs House, where the bodies of the “canned goods”, the concentration camp inmates, were left. However it was the attack on the Gleiwitz ‘radio station’ that attracted the most attention. The ‘take over of a German broadcast by Poles’ was being reported by German radio by 10.30pm and by the BBC the same evening, and featured in the New York Times the next day. Hitler referred to ‘three serious border incidents’ in his speech to the Reichstag on the 1st September announcing the war. The Nazi’s persisted with the Gleiwitz myth for years, it was only first seriously challenged at the Nuremburg trials.