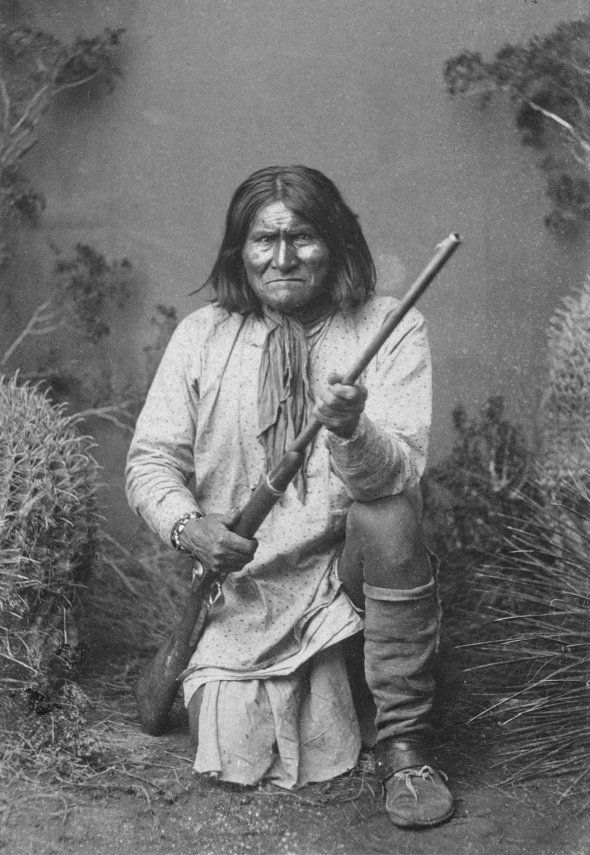 Geronimo (Mescalero-Chiricahua: Goyaalé “one who yawns”; June 1829 – February 17, 1909) was a prominent leader of the Bedonkohe Apache who fought against Mexico and the United States for their expansion into Apache tribal lands for several decades during the Apache Wars. “Geronimo” was the name given to him during a battle with Mexican soldiers. His Chiricahua name is often rendered as Goyathlay or Goyahkla in English.

After an attack by Mexican soldiers killed his mother, wife and three children in 1851, Geronimo joined revenge attacks on the Mexicans. During his career as a war chief, he was notorious for consistently leading raids upon Mexican provinces and towns, and later against American locations across Arizona, New Mexico and western Texas. 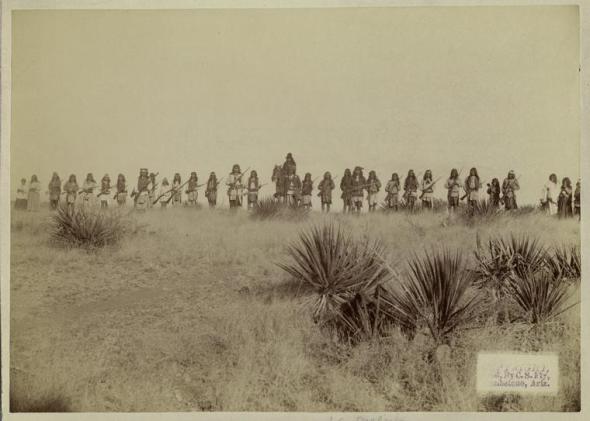 Photo of Geronimo and his warriors, taken before the surrender to Gen. Crook, March 27, 1886, in the Sierra Madre mountains of Mexico

In 1886 Geronimo surrendered to U.S. authorities after a lengthy pursuit. As a prisoner of war in old age he became a celebrity and appeared in fairs but was never allowed to return to the land of his birth. He later regretted his surrender and claimed the conditions he made had been ignored. Geronimo died in 1909 from complications of pneumonia at Fort Sill, Oklahoma.

Geronimo was born to the Bedonkohe band of the Apache, near Turkey Creek, a tributary of the Gila River in the modern-day state of New Mexico, then part of Mexico. His grandfather (Mahko) had been chief of the Bedonkohe Apache. He had three brothers and four sisters.

Geronimo’s parents raised him according to Apache traditions; after the death of his father, his mother took him to live with the Chihenne and he grew up with them. He married a woman named Alope from the Nedni-Chiricahua band of Apache when he was 17; they had three children. On March 6, 1851, a company of 400 Mexican soldiers from Sonora led by Colonel José María Carrasco attacked Goyahkla’s camp outside Janos while the men were in town trading. Among those killed were his wife, children and mother. The loss of his family led Geronimo to hate all Mexicans for the rest of his life; he and his followers would frequently attack and kill any group of Mexicans that they encountered. Recalling that at the time his band was at peace with the Mexicans, Geronimo remembered the incident as follows.

Late one afternoon when returning from town we were met by a few women and children who told us that Mexican troops from some other town had attacked our camp, killed all the warriors of the guard, captured all our ponies, secured our arms, destroyed our supplies, and killed many of our women and children. Quickly we separated, concealing ourselves as best we could until nightfall, when we assembled at our appointed place of rendevous – a thicket by the river. Silently we stole in one by one, sentinels were placed, and when all were counted, I found that my aged mother, my young wife, and my three small children were among the slain.

Geronimo’s chief, Mangas Coloradas, sent him to Cochise’s band for help in revenge against the Mexicans. It was during this incident that the name Geronimo came about. This appellation stemmed from a battle in which, ignoring a deadly hail of bullets, he repeatedly attacked Mexican soldiers with a knife. The origin of the name is a source of controversy with historians, some writing that it was appeals by the soldiers to Saint Jerome (“Jeronimo!”) for help. Others source it as the mispronunciation of his name by the Mexican soldiers.

Geronimo married Chee-hash-kish and had two children, Chappo and Dohn-say. Then he took another wife, Nana-tha-thtith, with whom he had one child. He later had a wife named Zi-yeh at the same time as another wife, She-gha, one named Shtsha-she and later a wife named Ih-tedda. Geronimo’s ninth and last wife was Azul. 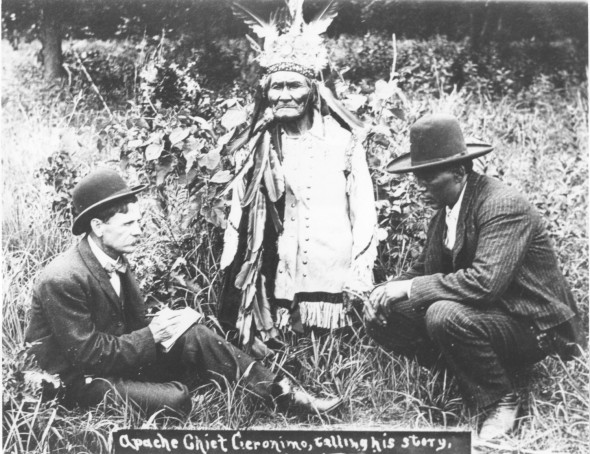 In February 1909, Geronimo was thrown from his horse while riding home, and had to lie in the cold all night before a friend found him extremely ill. He died of pneumonia on February 17, 1909, as a prisoner of the United States at Fort Sill, Oklahoma. On his deathbed, he confessed to his nephew that he regretted his decision to surrender. His last words were reported to be said to his nephew, “I should have never surrendered. I should have fought until I was the last man alive.” He was buried at Fort Sill, Oklahoma in the Apache Indian Prisoner of War Cemetery. 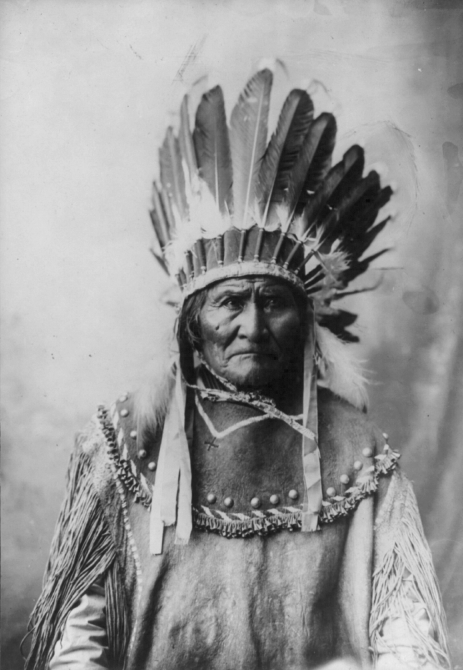