In August 1961, two young girls speak with their grandparents in East Germany over a barbed wire fence, a barricade which later became the Berlin Wall.

It’s interesting to see the still battered buildings from the battle of Berlin show their scars. I know it took time for parts of Germany to recover and rebuild but pictures like this really put it into perspective. 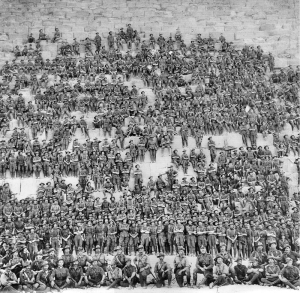 I once read somewhere that one of the men in the picture sadly passed away before it was taken so his friends propped him up so he could still be in it.

Group portrait of the Australian 11th (Western Australia) Battalion, 3rd Infantry Brigade, Australian Imperial Force posing on the Great Pyramid of Giza on 10 January 1915, prior to the landing at Gallipoli. The 11th Battalion did much of their war training in Egypt and would be amongst the first to land at Anzac Cove on April 25 1915. In the five days following the landing, the battalion suffered 378 casualties, over one third of its strength.

The poem ‘The Happy Warrior’ by Sir Herbert Read

I saw him stab
And stab again
A well-killed Boche.

This is the happy warrior,
This is he… 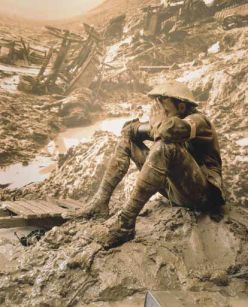 In 1805, after hearing the news of Lord Nelson’s death at Trafalgar, William Wordsworth began work on a poem that he entitled “Character of the Happy Warrior.”

A century later, the Imagist poet Herbert Read wrote a bitterly ironic reply to Wordsworth that has been deservedly praised. Read’s poem, “The Happy Warrior” contracts the reality of fear directly against the literary myth of Wordsworth’s “Character pf the Happy Warrior.”  This prototype of what “every man in arms should wish to be” is governed by reason, and even in “the head of conflict” he controls and subdues those necessary companions of the soldier, pain and fear. “This is the happy warrior” it concludes; “this is he/ Whom every man in arms should wish to be.”

Read shows instead a man driven by fear far beyond the reach of reason:  “I saw him stab, and stab again. A well-killed Boche.” To reinforce his point, Read ends his poem with Wordsworth’s own words- “This is the Happy Warrior,/ This is he.”